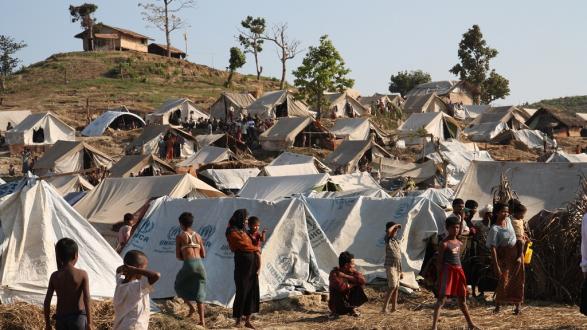 The Rohingya population of Myanmar became known, in some instances for the first time, to many in the United States after reports of human rights abuses and media coverage of state-sanctioned mass murder that has led to a refugee crisis.

Press attention flares on and off in its coverage of crowded refugee camps in places like Cox’s Bazar, Bangladesh, and the non-profit and government agencies that have set up aid initiatives there. In looking for solutions to this crisis beyond daily survival, the underlying decisions of regional and international governments need to be brought to light.

The United States has long held the reputation as a country where immigrants and refugees cross oceans seeking opportunity and freedom. With the realities of the current political climate, can the hundreds of thousands of displaced Rohingya be part of this national narrative? A problem that those seeking to immigrate immediately run into is the lack of legally recognized status.

One of the first policies by the Myanmar government to delegitimize the Rohingya and further propaganda that they are illegal immigrants from Bangladesh was to strip them of citizenship and identity cards.

One of the first policies by the Myanmar government to delegitimize the Rohingya and further propaganda that they are illegal immigrants from Bangladesh was to strip them of citizenship and identity cards.

“Bangladesh is not a signatory to the UN Refugee Convention, so the Rohingya are not officially listed as refugees. Without this legal status, the Rohingya in Bangladesh cannot be admitted to immigrate to third countries as refugees,” said Ali Riaz, a Pacific Council member and professor and expert of South Asian politics at Illinois State University, who last visited Cox’s Bazar in 2018.

The president of the Los Angeles Rohingya Association, Ko Ko Naing, said those who are fortunate enough to be admitted into the United States typically do so through UN sponsorship. He currently estimates the Rohingya population in California to be around 150. The number is different for a separate group known as Burmese Muslims who are from cities such as Yangon and are of Indian or other South Asian heritage.

"We don’t know if the U.S. government would call it a genocide."

Naing said the Burmese American Muslim Association has worked with his organization on human rights initiatives and educating the public on how genocide takes place.

“Los Angeles and California are not prime locations to come to. The UN will usually bring Rohingya refugees to states like Texas, Wisconsin, and Oregon, where the living cost is cheaper and there are more labor jobs. Usually a nonprofit and the UN will help pay for a place for one year,” Naing said. He is frustrated by the current rollback by the Trump administration of refugees admitted to the United States from all parts of the world.

Immigration is not the only method the United States could employ in helping the Rohingya people. Riaz explained that to his knowledge, the U.S. Department of State has created a list of Myanmar military personnel who have had sanctions imposed on them and are banned from traveling to the United States. He said in the past the State Department has repeatedly declared a willingness to cooperate with the international community to put pressure on Myanmar.

Initially in October 2017, there were conversations on whether the terms genocide, act of genocide, or ethnic cleansing should be applied. “In the last year I have not heard any conversations, so we don’t know if the U.S. government would call it a genocide,” Riaz said.

"What we are urging the UN and other powerful Western countries to do is create a safe-keeping zone so we can go back to our indigenous land with dignity, safety, and to get back our citizenship rights."

This is only a half measure taken to a certain extent without leadership and backing from the White House and a willingness to work with other governments. “The overarching policy of the Trump administration is to act alone, not working with allies. This unilateral approach has made it almost impossible to build a coalition to act on the Myanmar issue,” Riaz said. For example, the president and his cabinet cannot criticize NATO and then the send a representative to Brussels and expect cooperation to resolve the crisis in Myanmar.

“All they are doing is writing reports they have to take action. Maybe the United States should ask for a peacekeeping force and a safe zone for repatriation. This repatriation cannot be the cat and mouse game of Myanmar taking people back and then torturing them or putting them into concentration camps,” Naing said.

He is referring to a possible solution on the table, the establishment of a “safe zone” by the UN and others for the Rohingya in their home state of Rakhine in western Myanmar.

While the world focuses its attention on the atrocities and discriminatory policies of Myanmar’s government, they are not alone in seeking control of the state of Rakhine. China and India are regional players in this high-stakes land grab.

“What we are urging the UN and other powerful Western countries to do is create a safe-keeping zone so we can go back to our indigenous land with dignity, safety, and to get back our citizenship rights. This is not a privilege; these are our rights,” Naing said.

While the world focuses its attention on the atrocities and discriminatory policies of Myanmar’s government, they are not alone in seeking control of the state of Rakhine. China and India are regional players in this high-stakes land grab.

“China has been a friend to the Myanmar military for decades when they were ostracized by the international community. China could have used this leverage to intervene for the Rohingya, but instead they used that leverage to secure their investment in Rakhine,” Riaz said.

China is interested in two things in Rakhine. The first is building a port to unload oil from the Middle East and transport it via a pipeline through Myanmar. This would allow China to bypass Singapore in the Strait of Malacca and the contested South China Sea. The second is infrastructure and industry development, such as timber. India has made investments in that area as well and apart from a small number of trucks of aid to Bangladesh has refrained from taking action against Myanmar. Naing said the LA Rohingya Association has tried to tackle this problem.

In looking for solutions to this crisis beyond daily survival, the underlying decisions of regional and international governments need to be brought to light.

“We have sent letters to the Chinese government asking them to help stop this crisis, but they keep saying publicly they have a non-interference policy,” he said.

China’s claims of non-interference fall short when you examine the bilateral agreement between Myanmar and Bangladesh excluding international governments from repatriation talks. “This was proposed and advanced by China. Bangladesh thought that even given China’s interests in Myanmar and Southeast Asia they would be an honest broker, but they weren’t,” Riaz said.

The regional countries Naing said are speaking up for the Rohingya and making a real effort are Malaysia and Indonesia. He said Turkey is another country that has been ”good to us” in terms of donations but has fallen short of a real solution. “[Turkey] says they can help us with charity. I say we don’t want charity and to be begging for the rest of our lives. We need a sustainable solution: our rights back.”

Jackson Stephens is a USC graduate student participating in a foreign affairs reporting class taught by Professor Phil Seib, a collaboration between the Pacific Council and the Annenberg School of Communication and Journalism.