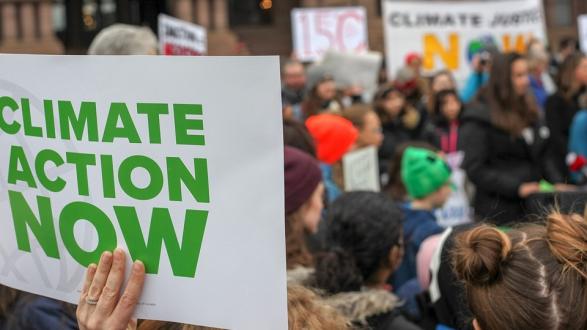 On September 20, millions around the world took to the streets to demand action on climate change. With the news cycle having generally moved on since then, it remains unclear what the long-term impact of the strikes will be.

Hundreds in Los Angeles participated in the protests, with many young students calling on leaders to take immediate and drastic action. Though California has been known to lead the way when it comes to fighting climate change, it is also a top air polluting state, with seven cities making the top 10 list of the most polluted cities in the United States, according to a 2019 report by the American Lung Association.

Efforts to fight climate change are not new, with many organizations having spearheaded environmental consciousness and sustainability measures in the 1990s. However, some say that a new approach is in order.

Efforts to fight climate change are not new. However, some say that a new approach is in order.

“When you think about 30 years of organizations like Greenpeace and all the people who have been lobbying and working within the system, in those 30 years carbon emissions have actually increased 60 percent,” said Dylan Kidd, who is part of the Outreach Working Group at the LA chapter of Extinction Rebellion, a global movement that uses civil disobedience and nonviolent resistance to urge governments to take action on climate change. “You just have to conclude, with full respect for people who have been working in these organizations, that [it’s been] an absolute catastrophic failure. So we can no longer rely on tactics that don’t involve mass disruptions.”

Speaking to a USC journalism class, Somini Sengupta, the international climate reporter for The New York Times, said that this youth-driven climate change movement is different from ones in the past.

“It spans rich countries and poor countries,” she said. “It’s really global in scale. The internet has allowed young organizers to connect with each other in ways that they weren’t able to organize before.”

LA grapples with a unique set of challenges when it comes to organizing any kind of a collective and sustained effort.

She added that there is one other critical difference in the approach being taken this time around.

“Scientists project that this could happen in the future,” she said. “There could be mass coral die-offs by 2050 if we don’t [take action]. 2050 is very real in the life of a 16-year-old. So they’ve been able to very effectively personalize the future, something that is kind of abstract.”

Extinction Rebellion was founded in the United Kingdom in May 2018 and observes the “3.5 percent rule”—the concept that it takes 3.5 percent of the population to challenge the government for change to be effected. However, some say that LA grapples with a unique set of challenges when it comes to organizing any kind of a collective and sustained effort.

“We don't really have an urban center because of the way in which our city is laid out,” said Melanie Winter, who is the founder and director of the River Project, a non-profit organization dedicated to watershed planning in LA County. “It makes it challenging for people to gather, and people being together in person consistently is a key to this. We’re a larger place. It’s difficult to organize.”

"I worry that people aren’t really connecting the dots between their own behavior and their own lifestyles and the message of the protests."

Lisa Hart, who serves on the steering board at the LA-based Neighborhood Council Sustainability Alliance, said that the protests in September were “galvanizing and cathartic” for her, and that it had felt good to be surrounded by people who shared her concerns about climate change. But she added that the protests do not go far enough.

“The truth is, we have to keep pushing, and we have to make changes in our lives,” she said. “I worry that people aren’t really connecting the dots between their own behavior and their own lifestyles and the message of the protests.”

Hart added, however, that she believes the momentum around climate action will sustain. She is hopeful that residents of LA will make lifestyle changes that she believes to be tangible for many, like buying electric vehicles instead of gas ones. While affluent buyers still largely dominate the demand for electric vehicles, manufacturers like Nissan, Kia, and GM are introducing more affordable options into the market.

Big, democratic countries like the United States can serve as a good test for whether the street protests will ultimately translate into electoral pressure.

“These are things that we all need to start doing,” she said. “And if enough people do it, then all of a sudden it’s just the way things are done, and everybody gets on board.”

Sengupta said that sociologists and political scientists have told her that big, democratic countries like the United States can serve as a good test for whether the street protests will ultimately translate into electoral pressure.