The Mekong River: A Natural Resource As Strategic Terrain 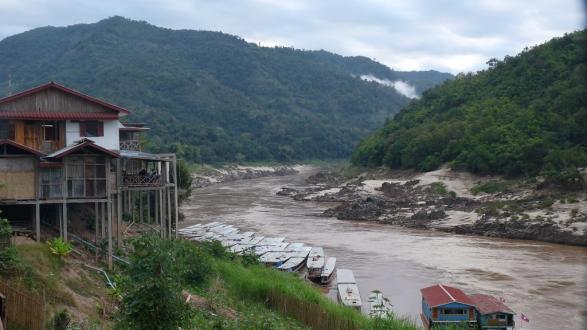 This article is an advance reading for our inaugural Water Conference on December 1, 2017, a special program exploring global water scarcity challenges and solutions, presented in partnership with O'Melveny & Myers LLP. Learn more about the conference here.
____________________

For millennia, Southeast Asia has been a battleground for the competing interests of diverse peoples: Khmer, Lao, Thai, and Viet as well as others. To complicate matters, foreign powers have become embroiled in the politics and balance of power of Indochina for their own economic or political gain. The 20th century saw the region (including the countries of Cambodia, Laos, Thailand, and Vietnam) throw off the yoke of French occupation and defend itself from American and Chinese incursions. The 21st century sees the advent of new, quieter, but perhaps more insidious attention from foreign powers, particularly China.

As recently reported by the BBC, China has embarked on an international program of entrenchment with the governments of this region of monumental proportions, masking nation-state capital improvement obligations as financial assistance in an effort to apparently make developing countries subservient to their newly acquired obligations. All of this is, of course, a state secret in China.

Researchers at AidData discovered that China had inured itself in Africa, Southeast Asia, and South America through project investments (mainly infrastructure improvements) that generated hard currency obligations and burdened developing countries with long-term debt. This is in sharp contrast to most Western countries who typically provide aid without requirement for repayment, or who finance assistance through accepted, nominally independent mechanisms such as multilateral development banks.

Is China simply executing long-term strategies to support its own economy? Or are there further strategic benefits for which the Asian leader is posturing?  Here we consider China’s current influence on the hydrology of the Mekong River and what it could potentially do to influence rivals through manipulation of the river.

The ultimate advantage for China is that all of its control over the Mekong River means that it can impact Vietnam, an ancient rival in this area, by lowering or increasing the Mekong’s flow.

China already has seven dams on the Mekong upstream in territory it controls, and is financing further development of dams or dramatic changes to the river itself in Cambodia, Thailand, and Laos. China ostensibly desires to assist these countries in the production of hydroelectric power, but likely also desires to increase the navigability of the river throughout in order to increase its trade network. To do so it needs to dynamite rapids and free physically or politically constrained areas of the river in order to accommodate ships up to 500 tons.

It is important to understand the geopolitical context of China’s assistance to the region. In 2016, as a member of the Association of Southeast Asian Nations (ASEAN), Cambodia vetoed a statement by the organization calling for China to recognize the assertions of joint or sole ownership of its member states and to stop militarizing the South China Sea. China’s ability to support and stabilize Cambodia, particularly its long-time ruler, Hun Sen, guarantees that its position is protected in this important international forum. Beyond cash aid and donations in-kind, China likely also views hydropower as an important tool to maintain Hun Sen’s grip on power.

China has supported Laos in much the same way, and enjoys historic ties with its government. Both Cambodia and Laos are able to engage in these massive projects through loans offered by Chinese banks, obligating the people of these countries to pay the Chinese a modern tribute for the foreseeable future. The ultimate advantage for China, however, is that all of its control over the river means that it can impact Vietnam, an ancient rival in this area, by lowering or increasing the Mekong’s flow.

Lowering the flow increases the Mekong Delta’s salinity rate and causes it to subside by depriving it of siltage, which would likely result in the degradation of one of Vietnam’s principal sources of food. Alternately, floods beyond the norm or that occur after crops have been planted can destroy the crops, as well as local infrastructure, and could potentially result in loss of life.

China can use its influence on the Mekong River to realize its political goals.

Additionally, if political leadership in Cambodia transitioned from the Cambodia People’s Party, one could only assume that China would, in turn, remind the government of their political and economic obligations. If the government of Cambodia were to begin to act independently of the interests of China, China could "forget" to manage upstream dams, particularly in the sensitive monsoon season, when Cambodia needs the Mekong to reverse the flow of the Tonle Sap to irrigate its rice basket area in the center of the country. In this way, Cambodia is now perfectly positioned to be threatened or cajoled by its big brother to the north, with no possibility of independent foreign policy.

China’s record shows that it does not place a high value on environmental sustainability unless it is in concord with the survival of the Communist Party and its elites rather than the survival and well-being of its own citizens. However, China’s economic and political power is great in an area of the world with endemic poverty and rampant corruption.

China can use its influence on the Mekong River to realize its political goals, and it will likely continue to contribute to projects such as hydropower. It will do so because, regardless of the secondary or tertiary effects of wielding such influence, projects such as these are a way to generate new customers for Chinese products. These projects also tie ruling elites of impoverished countries to China politically and ensure economic kowtowing from developing countries for decades to come.

Most importantly, the installation of new infrastructure gives China a strategic lever to control the countries of Indochina by threatening them with twin wraths of flood or drought if they are not in line with its politics—turning a natural resource into strategic terrain, able to be wielded against the willful or rebellious.
____________________

Sam H. Casella is a Pacific Council member and a Captain in the U.S. Army.

The views and opinions expressed here are those of the author and do not necessarily reflect the official policy or position of the Pacific Council nor of the U.S. Army, Department of Defense, or U.S. government.