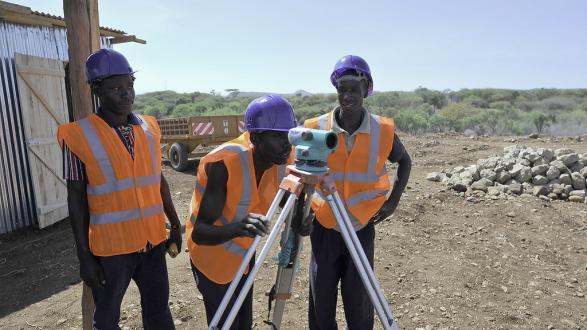 Although Africa has been experiencing economic growth through exports of commodities, the continent needs to increase investments in its labor force in order to sustain its economic growth.

The labor force, which is one of the major determinants of economic growth, is growing at a fast rate in Africa. Every year, Africa has to create about 18 million jobs to contain new entrants in the workforce. However, Africa is currently creating only 3 million formal jobs annually. The African labor force is growing much faster than jobs are being created; thus, Africa needs to invest in technical education programs, entrepreneurship, and women in order to catch up with the surge of the new working-age population and increase productivity.

Africa needs to invest in technical skills through vocational education and training programs, in addition to technology and innovation. Africa has the highest rate (57%) of low-skilled workers in the world. Besides, most skilled trade workers are handymen and operate in the informal economy. Branding technical and vocational education will attract potential students and investors. For example, Egypt has established a technical education development program as part of a new strategic plan that aims to reform the Egyptian education system.

Africa’s investment in its labor force through the branding of technical education, the promotion of entrepreneurship, and the inclusion of women will increase the continent’s productivity.

The Egyptian technical education development program operates under a public-private partnership with German Quality Control agencies. At the end of the three-year-program, German Quality Control agencies provide graduates with a certificate through an international education degree. In 2018-2019, Egypt assessed 55 percent of enrollments in technical and vocational schools. African leaders’ investment in technical skills will attract foreign investments and enhance the continent’s labor force productivity.

Africa’s investment in entrepreneurship is also critical for the sustainability of the continent’s economic growth because entrepreneurship constitutes a very effective tool for job creation. According to the African Development Bank, 22 percent of the African working-age population run businesses. Moreover, small businesses with less than five years of existence are responsible for one-third of job creation in the formal sector on the continent.

Many African entrepreneurs have started their businesses because of their inability to find a job. Thus, Africa needs policy reforms that will facilitate access to funds and business training in order to incentivize potential entrepreneurs, who will increase the productivity of the continent’s labor force.

A more inclusive and productive labor force will put Africa on the path toward sustainable and balanced economic growth.

Finally, Africa needs to invest in women. In Africa, women’s labor productivity is reduced to the care of their households and children. Moreover, about 75 percent of women with non-agricultural jobs in sub-Saharan Africa operate in the informal sector. Since half of the African population is female, women’s exclusion from labor markets has a negative impact on the continent’s economy.

Women’s full and equal participation in the African labor force would lead to an increase in gross domestic product (GDP) of about 15 percent in Côte d’ Ivoire, 20 percent in Mali, and almost 50 percent in Niger. Policy reforms that impede gender inequality in the formal sector, along with government support to women’s education programs, will increase women’s chances to fully and equally participate in the African labor force. As a result, the continent’s labor productivity will increase and economic growth will sustain.

In conclusion, Africa’s investment in its labor force through the branding of technical education, the promotion of entrepreneurship, and the inclusion of women will increase the continent’s productivity. Africa’s current economic growth mainly derives from exports of commodities. Therefore, a more inclusive and productive labor force will put Africa on the path toward sustainable and balanced economic growth.

Aurelie Ngo Mambongo is a Pacific Council member and a graduate of the Emerging Leaders Program at the Harvard Kennedy School of Government.