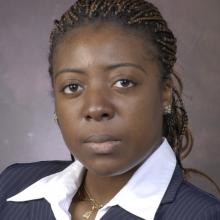 Aurelie Ngo Mambongo is an Economist and an international development practitioner. Her area of interest is economic development in Africa and foreign policy. She holds two Master’s Degrees in Economics and Public Policy from Georgia State University and an Executive Certificate in Public Leadership from Harvard University’s Kennedy School of Government.

Aurelie is a Senior Executive Fellow from Harvard University’s Kennedy School of Government. She is also a Sustainable Development Goals (SDGs) Leader and a former Ambassador at the United Nations Association in the United States (UNA-USA). She is a member of various networks, including the Women's Foreign Policy Group and the African Leadership Network.

Aurelie is Fluent in French and English.