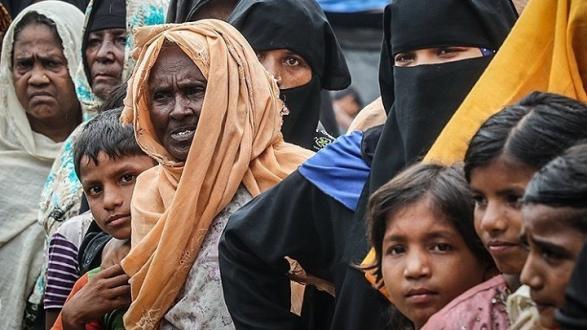 During a teleconference about the ongoing humanitarian crisis in Myanmar and Bangladesh that has displaced the Rohingya Muslim minority, experts disagreed about how the international community should respond.

The call featured Mr. Simon Billenness, executive director of the International Campaign for the Rohingya; Ms. Priscilla A. Clapp, senior advisor at the U.S. Institute of Peace; and Dr. Ali Riaz, university professor in the Department of Politics and Government at Illinois State University. The discussion was moderated by Dr. Parveen Parmar, associate professor of clinical emergency medicine in the Keck School of Medicine at the University of Southern California.

In recent months, nearly half a million Rohingya Muslims have fled from Myanmar’s western Rakhine State into Bangladesh to escape abuse and death at the hands of Myanmar’s army. The crisis, which both the UN and the United States are referring to as ethnic cleansing, has now become the worst contemporary humanitarian disaster in Southeast Asia.

"The sanctions on the Myanmar army have been one of the more important contributions the international community has made to support the civilian government."

While Billenness argued for the extension of Western sanctions against the Myanmar army, Clapp disagreed and said sanctions will not help any of the parties involved.

"The sanctions on the Myanmar army have been one of the more important contributions the international community has made to support the civilian government," said Billenness. "The United States could be doing a lot more to help resolve the Rohingya crisis situation in Myanmar and Bangladesh. It can sanction individuals in the Myanmar army as well as business interests. Sanctions do effect Asian business in Myanmar."

Clapp argued that sanctions actually do more harm to western nations than they help the Rohingya.

"The West’s sanctions against the Myanmar army won’t turn anything around for the Rohingya, it will just cut us out of the situation," she said. "We need to keep engaged."

Billenness countered by saying it is "fundamentally misguided" to say sanctions didn’t work. "Sanctions essentially brought the army to the negotiating table," he added.

"It is counterproductive to put the blame for the Rohingya crisis on Aung San Suu Kyi. She cannot afford, politically, to be speaking out against the military in favor of the Rohingya."

They also had different perspectives on where the responsibility for these human rights abuses in Myanmar ultimately lies. While they both singled out Myanmar’s army, they differed on how much blame should be laid at the feet of Myanmar’s leader, Aung San Suu Kyi.

"The problem in Myanmar is the army, which has considerable political and economic power," said Billenness. "The solution to problems such as the violence against the Rohingya is to dramatically curtail Myanmar’s military power and put the army under civilian oversight. It is the army that is carrying out the vast majority of grave human rights abuses. There needs to be consequences for them."

Clapp agreed with that point, adding that there are essentially two governments in Myanmar: civilian and military.

Riaz argued that ultimate responsibility for the ongoing humanitarian crisis lies with Kyi.

"The Rohingya crisis is an abject failure from Aung San Suu Kyi," he said. "Perhaps we put too much hope in her in the beginning, because of the structural constraints. But that doesn’t mean she couldn’t do anything."

Clapp pushed back against Riaz’s argument, saying that it’s "counterproductive to put the blame for the Rohingya crisis on Aung San Suu Kyi. She doesn’t have control of the situation. She tried to turn things around for the Rohingya. But she cannot afford, politically, to be speaking out against the military in favor of the Rohingya."

With or without sanctions, Riaz said that the international response to this crisis has been severely lacking.

"The camps that more than 700,000 Rohingya are living in look like concentration camps," he said. "The conditions are terrible, and monsoons are coming. I am worried about public health. Where is the action from the international community regarding this crisis? A coordinated international response is necessary. Without it, this crisis isn’t going anywhere."

Billenness also discussed the potential involuntary repatriation of the Rohingya back to Myanmar, a plan that has since been postponed.