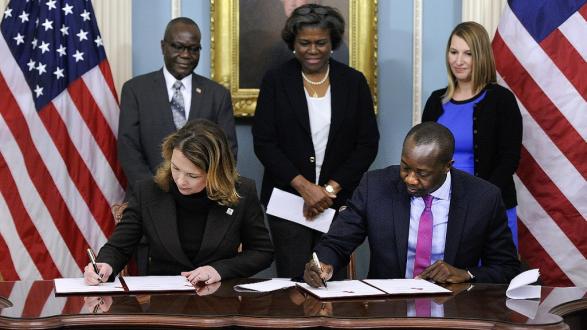 Development organizations must help support countries who want to lead their own sustainable development efforts, Dana J. Hyde told Pacific Council members during a discussion on how innovative approaches to delivering U.S. foreign assistance can aid the global fight against poverty. The discussion was moderated by Dr. Shaheen Kassim-Lakha, director of the Conrad N. Hilton Foundation.

Hyde most recently served as the Chief Executive Officer of the Millennium Challenge Corporation (MCC). MCC is a development program that was established by Congress in 2004 with strong bipartisan support. It aims to reduce poverty in developing nations through promoting economic growth. As CEO, Hyde oversaw a portfolio of roughly $4 billion in economic assistance programs aimed at reducing poverty, spurring growth, and advancing America’s interests around the globe.

"At any given time, MCC will only be in about 20 countries," said Hyde. "We focus on those low and lower middle income countries that are relatively well-governed and that they themselves are trying to lift themselves out of poverty."

"We all need to be ambassadors for why U.S. engagement in terms of global development is important for our own interests."

Hyde explained that the MCC is essentially a competitive program. Countries are ranked every year on the basis of 20 transparent indicators of major international institutions, then clustered in three categories: governance (including the rule of law, transparency, the fight against corruption, democracy); economic freedoms (how long it takes to start a business, the participation of gender in that economy); and the degree to which the countries themselves are investing in their own resources and people (including their education and immunization rates).

"MCC is unique in a number of specific ways," she said. "It is purposefully made to be a different model of assistance. For example, USAID manages about $20 billion a year and has around 10,000 people. MCC is a boutique; it has about $1 billion a year and a staff of 350. MCC is different in that it only has one mission. It is not meant to be a food program or health or education sector specific. It’s focused on how to alleviate poverty through economic growth."

About 65 percent of MCC’s investments are in Africa. They also have a presence in the three Northern Triangle countries (Honduras, El Salvador, and Nicaragua), and are increasingly moving into Asia, including in Indonesia, the Philippines, Nepal, Mongolia, and most recently Sri Lanka.

Through its investments, MCC is building infrastructure, roads, transmission lines, large-scale irrigation, and educational facilities. It is based on what the data from their research says is a priority, as well as what the partner country wants them to focus on.

"First in the door is our economists," she said. "They work with the finance ministry and undertake a ‘constraints to growth’ analysis. Then we ask the country’s core team to come up with proposals of what our investment will look like."

They spend the first two years working on the initial analysis and then they expand their outreach to include civil society and the private sector. On average, their investments have been about $350 million in grant form over a five year period.

"As a development organization today, you have to think in terms of how you leverage other existing resources [besides your own limited capital]," said Hyde. "Leverage typically means public/private partnership, foreign direct investment, domestic private capital, domestic resource mobilization, and remittances. For MCC, leverage can also relate to policy reform. It has been shown that countries in Africa are changing their laws in order to pass an indicator to be able to get an MCC award."

"If empowered and given rights, women have been shown to bolster their communities and put money back into their local economies."

Hyde said that MCC believes they can add value to a country’s situation by looking at the "cross cutting enablers of development," especially gender.

"If empowered and given rights, women have been shown to bolster their communities and put money back into their local economies," said Hyde. "As Christine Lagarde likes to say, ‘Investing in women is an economic no-brainer.’ So while MCC has its sights on our contribution and how far we can punch above our weight in terms of delivering in many respects, we’re also focusing very much on our gender efforts."

Despite such potential setbacks, Hyde said that there is strong, bipartisan support for development in Congress.

"Over the last two years, to everyone’s surprise, Congress has come together to pass bills such as the Electrify Africa Act and the Global Food Security Act," she said. "The coalition that existed 12 years ago under President Bush, who brought us [the President's Emergency Plan for AIDS Relief] and MCC, is still very strong. There are lots of reasons to be hopeful. At the same time, we all need to be ambassadors for why U.S. engagement in terms of global development is important for our own interests in three ways: it is an expression of our values, it creates stability around the world, and it helps grow the global economy. It’s incumbent upon all of us to be ambassadors for those messages."