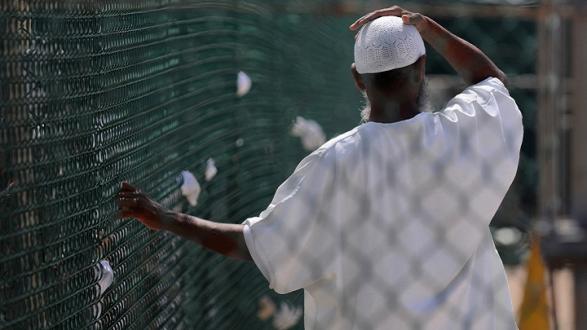 During the week of November 16-20, I acted as an official NGO hearing observer representing the Pacific Council to the Military Commission Hearings of Abd al-Hadi al-Iraqi (hereinafter “al-Hadi”). The al-Hadi hearings were unique in that they received less national attention and attendance than some of the other hearings. There were thirteen NGO and law school student observers, but no families of victims and, of the press, only the hardy Miami Herald reporter Carol Rosenberg was on hand to cover the proceedings.

The fifty-three year old al-Hadi was captured by the CIA in 2006 and brought to Guantánamo Bay in April 2007 after several months at a CIA black site. Al-Hadi was allegedly a high-ranking member of the Taliban and al-Qaeda. He is charged with five classic war crimes offenses related to his alleged role in attacks against medical workers, civilians and foreign troops carried out in Afghanistan, Iraq, and Pakistan between 1998 and 2005. In court he appeared thin but healthy and in good spirits. He actively and frequently conversed with his counsel.

During the course of three days of hearings, the Commission heard arguments related to four motions: 1) a motion to dismiss charges for lack of subject matter jurisdiction and to compel a status determination under Article 5 of the Geneva Convention; 2) a motion to strike a series of common allegations in the charge sheet; 3) a motion to compel discovery; and 4) a motion seeking to prevent contact between al-Hadi and female guards.

The first three motions were argued in a standard similar to what one would witness in a U.S. federal court. Each motion was brought by the defendant and each was ultimately denied by the judge, but not without appropriate arguments and discussion both oral and written. Each of these oral arguments lasted about two to three hours. I was impressed with the quality of representation from the attorneys for both the defense and prosecution.

Al-Hadi’s motion to prevent contact with female guards was the most interesting motion heard during this set of hearings and lasted over the course of two days. The motion was not discussed on its merits, instead devolving into a prolonged debate over discovery. In essence, the prosecution had failed to hand over videotapes of an incident involving al-Hadi and a female guard until a few hours before the hearing was set to begin. In addition, defense attorneys had been denied interview access to detention guards who were present during the incident.

These issues, while admittedly small in the grand scheme of things, lend support to those who are more skeptical of the government’s assertions of fairness. However, I found the judge to be resolute in his protection of defense counsel’s evidentiary rights and he ordered a hearing continuation until defense counsel had proper time to consider the new evidence and prepare arguments. In addition, despite strong objections from the prosecution, the judge ordered an injunction on female guards handling al-Hadi until the motion had been ruled upon, which would not occur for many weeks.

While I found the Commission’s hearing procedures to be generally fair, my overall impression was that the hearings and trials are little more than a formality. That is, regardless of whether the Commission finds a defendant guilty or not guilty, individuals who are tried will remain in detention for years to come if not for the rest of their lives. As several of my colleagues have observed, the deliberate pace of the Commission’s hearings borders on dawdling. Clearly al-Hadi will not be leaving Guantánamo Bay without a congressional order that either allows for his release or moves his proceedings to federal court.

It is difficult to leave Guantánamo Bay without concerns about indefinite detention. As of this writing, over eighty detainees at Guantánamo Bay have been cleared as a threat to U.S. national security and will never be tried by the Commission. Prior to his resignation, Special Envoy for Guantánamo Closure Cliff Sloan was circling the globe searching for countries that would accept these individuals. Congress is currently considering a bill that would prevent further release of detainees cleared of wrongdoing.

According to Brigadier General Mark Martins, the Commission’s Chief Prosecutor, there are twenty detainees who are currently in some stage of Commission proceedings or are soon to be charged. In addition the Pentagon has identified another thirty-eight detainees as a threat to national security, yet the Commission does not have adequate evidence to initiate legal proceedings. The evidence used to retain these individuals at Guantánamo Bay is classified.

If the United States continues to hold individuals at Guantánamo Bay without any hearing or trial, I believe that observers should be permitted to report on the detention conditions. While we were provided with an emotional and enlightening tour of Camp X-Ray (the site of the original outdoor detention center) as well as the courtroom’s detention facilities, no observer groups are granted access to the three current detention centers. Without first-hand knowledge of detention conditions, observer conclusions on the efficacy of the Guantánamo Bay Commissions will be incomplete.

Charles Gillig is Chief Executive Officer at RemitRight LLC, and a member of the Pacific Council on International Policy.