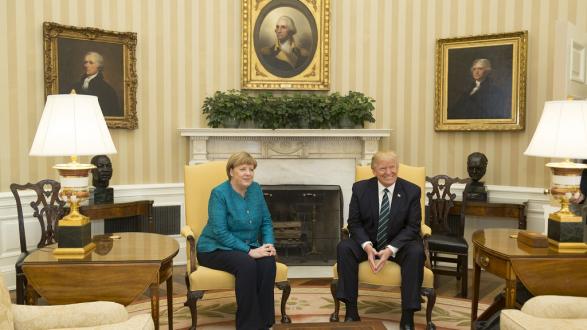 This week, President Trump announces tariffs on Canada, Mexico, the EU, and China; India and Pakistan restore their ceasefire on the Kashmir border; Israel and Gaza trade fire and agree to a ceasefire; and more.

Commerce Secretary Wilbur Ross announced the Trump administration would move forward with imposing tariffs on Canada, Mexico, and the European Union, the closest allies of the United States, citing national security. The tariffs will be placed on imported steel and aluminum at 25 percent and 10 percent, respectively. European Commission President Jean-Claude Juncker said he would bring the matter before the World Trade Organization, and added that the EU is hurt by overcapacity in the steel sector just as much as the United States. Mexico and the EU vowed to retaliate immediately with tariffs of their own on culturally, politically, and economically sensitive goods originating in the United States. The EU will place tariffs on Harley Davidson motorcycles, Kentucky bourbon, blue jeans, and some agricultural products. Mexico will place tariffs on steel along with agricultural products such as apples, blueberries, cheese, grapes, and pork. Republican members of Congress criticized the Trump administration’s new tariffs. Fears of a global trade war continue to weigh on investor confidence and could slow global economic gains.

Pakistan and India agreed to reinstate a 15-year-old truce over the Line of Control in the contested Kashmir region after months of shelling one another. Each side has accused the other of starting the hostilities and violating the 2003 accord. Since partition in 1947, the conflict has claimed over 70,000 lives. This recent violence has left 25 Indian civilians and 18 Indian soldiers dead according to Delhi, and 28 Pakistani civilians dead and 117 wounded, along with 100 Pakistani soldiers killed, according to Islamabad. The Kashmir region has been the basis for all but one of the four wars India and Pakistan have fought against one another.

President Trump announced on Tuesday that he would move forward with 25 percent tariffs on $50 billion worth of Chinese goods. The move is an aggressive step toward balancing the $337 billion trade deficit between the United States and China, a major priority of President Trump. The final list of tariffs will be announced by June 15, and investment restrictions will be announced by June 30. The initial Chinese reaction was restrained, citing surprise and willingness to defend "national interests." Two full days of talks held in Washington earlier in May between the two governments resulted with a vague promise by the Chinese to buy more agricultural and energy products.

A Belgian prisoner on a temporary release killed two police officers and a bystander in the city of Liege on Tuesday. The man was subsequently killed by police officers after he attempted to take hostages in a nearby school. The prison inmate was suspected of becoming radicalized while in prison, and ISIL has claimed responsibility for the attack, though there is no hard evidence to back up that claim. Authorities are now facing questions as to why a prisoner suspected of being radicalized was allowed to leave on his own for the day. Belgian authorities are continuing to investigate the murders as an act of terror.

Israel and Hamas reached a ceasefire after the most intense exchange of fire since the 2014 war. The Israeli Defense Forces claim that over 100 rockets and mortars were launched by Hamas, and responded with airstrikes hitting over 60 Hamas and Islamic Jihad targets. U.S. Ambassador to the United Nations Nikki Haley called for an emergency meeting of the UN Security Council to discuss the uptick in violence between Israel and Gaza.

Philippine President Rodrigo Duterte said the country will go to war in the South China Sea if any of its troops stationed in the region are harmed or if Beijing tries to extract resources from the South China Sea-West Philippine Sea on their own. Manila is currently pursuing a joint agreement with Beijing on oil and gas exploration in the region. The waters host an economically vital, yet threatened, fishing industry relied upon by all regional actors. China’s military buildup in the South China Sea has been condemned by many across the region and around the world, and they were recently disinvited from the U.S.-led Rim of the Pacific military exercise.

An attack, allegedly carried out by an armed Islamist group in Mozambique, left 10 people dead, including two children. Victims were allegedly abducted from their homes near the coastal town of Palma and beheaded, after which their remains were dumped in nearby bushland. The northern province of Cabo Delgado has seen a spate of Islamist violence since October 2017 when militants carried out a string of attacks in the town of Mocímboa da Praia.