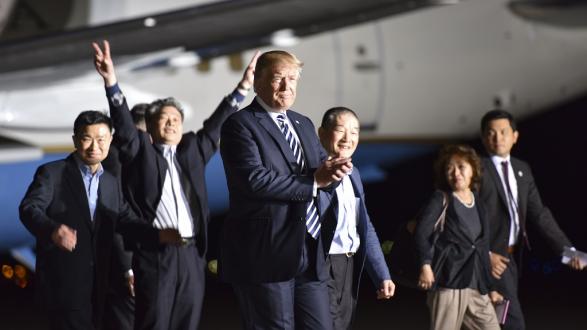 This week, North Korea frees three U.S. citizens in its custody; President Trump pulls the United States out of the Iran nuclear deal; the Pentagon releases a report detailing failures that led to the deaths of four U.S. soldiers in Niger; and more.

In NAFTA talks this week, Mexican officials for the first time said they may be willing to be flexible on the rules of origin level for automotive content. U.S. officials made clear their intention to penalize the Mexican auto industry unless it increases wages to $16 an hour. On Thursday, Mexican Economy Minister Ildefonso Guajardo said they will know within the next couple of days whether a new, short-term NAFTA deal will be possible.

Another series of attacks in Kabul, Afghanistan, this week killed at least 15 people. Gunmen and suicide bombers carried out three simultaneous attacks on Wednesday, just one day after the Taliban took control of two rural northern districts. ISIL claimed responsibility for two of the attacks, and the Taliban claimed responsibility for the third. Last week, a pair of suicide bombings in Kabul killed at least 25 people, leaving residents in the capital on edge as violence escalates.

On Thursday, President Trump and Vice President Pence greeted three U.S. citizens released by North Korea to Secretary of State Mike Pompeo’s custody during his second trip to the country this week. The three men had been held prisoner for up to two years. The president also announced that his highly anticipated meeting with North Korean leader Kim Jong-un will take place on June 12 in Singapore.

On Wednesday, German Chancellor Angela Merkel’s cabinet approved legislation allowing refugees with "subsidiary protection" to bring their direct relatives to Germany. The move will resettle an additional 1,000 migrants per month, starting August 1. Those with full refugee status were already allowed to bring their families. The move is expected to draw heavy opposition from both the left—which thinks it doesn’t go far enough—and the right—which wants to abolish reunification altogether.

President Trump announced on Tuesday that the United States will withdraw from the Joint Comprehensive Plan of Action (JCPOA), also known as the Iran nuclear deal. "This was a horrible one-sided deal that should have never, ever been made," he said. "It didn’t bring calm, it didn’t bring peace, and it never will." The president also announced that the United States would reimpose sanctions on Iran. The move puts the United States at odds with its European allies, China, and Russia, who are all party to and committed to staying in the deal. Read what Pacific Council President and CEO Dr. Jerrold D. Green has written about the Iran deal.

The Pentagon released a report saying "individual, organization, and institutional failures" led to the deaths of four U.S. Special Forces soldiers in Niger in 2017. The soldiers were ambushed by ISIL-affiliated fighters in a remote village. More troops would have been lost in the ambush were it not for the assistance of French and Nigerian soldiers. Maj. Gen. J. Marcus Hicks, the general in charge of U.S. Special Operations forces in Africa, issued an order this week to U.S. troops to "plan missions to stay out of direct combat or do not go."