Examining the State of U.S.-ASEAN Relations 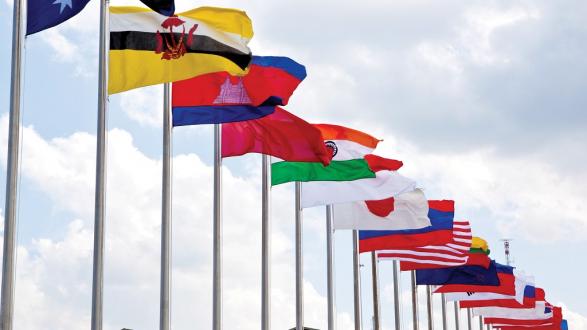 The U.S. ambassadors to Indonesia, Laos, and Thailand recently discussed America’s trade and investment relations in Southeast Asia and the future of U.S.-ASEAN relations with Pacific Council members and others.

The discussion was part of "The U.S. Ambassadors’ Tour," a US-ASEAN Business Council initiative aimed at forging economic and people-to-people connections between U.S. government, business, and academic leaders and ASEAN markets. It was presented in partnership with the Asia Society Southern California, the US-ASEAN Business Council, the USC Marshall School IBEAR MBA Program, USC’s U.S.-China Institute, and the Pacific Council.

Today, the 10 countries of ASEAN—Brunei Darussalam, Cambodia, Indonesia, Laos, Malaysia, Myanmar, the Philippines, Singapore, Thailand, and Vietnam—are the fourth largest export market for the United States, and the number one destination for U.S. foreign direct investment in Asia. Trade with ASEAN supports almost 550,000 American jobs. Each of the ambassadors spoke about the state of U.S. relations with the country they interact with.

"We’re not competing with China, but we do want Laos to be able to voice their concerns through ASEAN."

"Laos borders four ASEAN countries and China, so it has a history of being pretty insular," said Bitter. "Being part of a bloc in Southeast Asia is important to them, so they’re putting their hopes in the Trans-Pacific Partnership (TPP) and ASEAN. Ever since President Obama visited in 2016 and pledged $90 million to help clear unexploded ordnance, U.S.-Laos relations have been on an upward trajectory. The Trump administration’s posture toward Southeast Asia as an important regional partner has not changed very much."

She also pointed out that China is investing in infrastructure projects in Laos, including a major railroad.

"We’re not competing with China, but we do want Laos to be able to voice their concerns through ASEAN," she said. "Laos is concerned about the impact of Chinese loans, and they’re seeking to diversify."

Davies said the United States has a variety of important, strategic interests in Thailand, including health research, the Peace Corps, law enforcement exchange programs, and of course trade.

"One of the coolest things about our relationship is that it’s old," he said. "This is our oldest friend in Southeast Asia. This year we’re celebrating 200 years of friendship. I’m very proud of the extensive, grassroots programs we’re doing with the people of Thailand."

"Since Thailand is so embedded in the supply chain in China, Japan, and the United States, they’re concerned about this talk of trade tensions rising."

He pointed out, though, that the situation in Thailand has not always been smooth.

"There was a coup d’état four years ago, which led to a downward turn in relations, but since the passage of their new constitution things have gotten a lot better," he said. "We’re all hopeful that Thailand gets back to democracy. Elections have been promised in February 2019."

Davies also said that Thailand is concerned about rising trade tensions in the region, particularly between China and the United States.

"They’re asking, ‘Where is the United States going on trade?’ Since Thailand is so embedded in the supply chain in China, Japan, and the United States, they’re concerned about this talk of trade tensions rising and actions potentially being taken," he said.

Donovan said Indonesia is "an incredibly important country for the United States," in terms of both trade and counterterrorism efforts.

"A prosperous, democratic, and secure Indonesia is good for us, the ASEAN region, and the world."

"I often joke that Indonesia is the largest country that Americans know so little about," he said. "There’s an awful lot at stake in terms of our interests in Indonesia. It’s the third largest democracy in the world and the world’s largest Muslim majority country. Our trade relationship and counterterrorism cooperation efforts are very important. A prosperous, democratic, and secure Indonesia is good for us, the ASEAN region, and the world."

He added that Indonesia has lately made good strides to open up foreign investment and make it easier to do business there, but that they still have a long way to go.

Feldman spoke about how successful ASEAN has been, despite the challenges it faces.

"Southeast Asia is one of the fastest growing economic regions of the world," he said. "It is also one of the youngest, and it is very tech savvy."

"The US-ASEAN Business Council welcomes competition from Europe in the ASEAN region. Let the games begin."

He pointed out that although the Regional Comprehensive Economic Partnership (RCEP) is commonly known as China’s version of TPP, just like TPP it was started by ASEAN. When asked about European investment in the region, he said the US-ASEAN Business Council "welcomes competition from Europe in the ASEAN region. Let the games begin."

Davies said that ASEAN has been very successful in its main pursuit: resolving conflicts among member states.

"They’re committed to making ASEAN work," he said. "So is the United States."