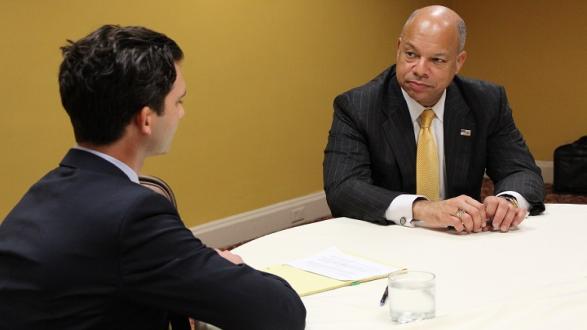 What can we expect from executive action regarding immigration? Does the evolution of security technology – drones and beyond – make us more safe but less free? Event Envoy Jordan Teti pressed for answers to these questions and more in his interview with Secretary of Homeland Security Jeh Johnson last week.

Review the full one-on-one interview below to learn more about Secretary Johnson’s take on balancing freedom and safety, immigration, and more.

Jordan Teti: I’ll begin with the Pacific Council “hallmark question”: What is the most pressing global issue that is not receiving enough attention?

Secretary Johnson: I’d like to see us all devote more attention to information sharing between and among nations about individuals of suspicion who are traveling between and among those nations. There are a lot of issues that are getting a lot of good attention right now, like cybersecurity and basic counter-terrorism, but that’s where my focus is right now.

Teti: You mentioned earlier today that your favorite part of your job is attending naturalization ceremonies where people are given the benefit of American citizenship. The many rights and opportunities that come with being a citizen aside, what duties and obligations are there?

Johnson: Of course there are certain basic civic participations like jury duty and voting. But then there are other, less formal responsibilities I think we have as Americans: like lending a helping hand to others—charity in one form or another, not necessarily monetary. Being a good citizen means a lot of things. At almost every ceremony I go to many of the people being naturalized are already in our military. Of the 1,020 people who were naturalized this morning, 17 were already in uniform in the Marine Corps, Navy, and Army. They signed up to serve our country even though they were not yet citizens. These are lawful permanent residents who signed up to defend the country. That’s civic responsibility at its best.

Teti: Should there be some kind of obligation to serve, if not in the military then some kind of community service? Is that something that the American government should encourage more actively?

Johnson: Yes, I believe that it’s something the American government should encourage, and I’d like to encourage young people and young professionals to think about a career in public service. It doesn’t have to be permanent; it may be a revolving door career like my own. I’ve been in public service now four separate times. I practiced law for most of my career once I finished law school. But, I’ve been in public service now four separate times. I left after the third time at the end of 2012 because I thought I was done, and then the president asked me to come back. And I did, even though I have two kids in college with two separate tuitions. I did it because I believe in public service. I think for a young lawyer, or a young professional of some sort, part of being a good citizen ought to be thinking about serving your country in one way or another.

Teti: You spoke earlier about executive discretion within the law with regard to immigration reform. Is there a limit to what the President can do when taking executive action?

Johnson: There are certain things you can’t do except through an act of Congress. For example, you can’t expand the category of people who can get citizenship. You can’t grant privileges and immunity in a treaty – this requires ratification by the Senate. You can’t appropriate money. But there are a number of things that you can do. For example, DACA, which was enacted two years ago, is an act of deferred action. Deferred action from prosecution or enforcement of the law in some respect has been around for generations. When I was a young prosecutor we routinely entered into deferred prosecution agreements with people because, in an exercise of prosecutorial discretion, we determined our resources were better spent in another direction. It’s a judgment made on a case by case basis, but deferred action is a very traditional form of prosecutorial discretion.

Teti: How big can the class given deferred action get?

Johnson: That’s a very good question. There’s no firm bright line answer. But, you can have a policy where a class of people is eligible for deferred action so long as they come forward on a case by case basis to be screened and, in an exercise of discretion, you can decide each person should be given deferred action for a period of time. That’s how it works for DACA:  an eligible class of people that came into this country below a certain age, within a certain window, and who haven’t committed any crimes. They can be granted deferred action for two years. This is a fairly traditional form of executive action.

Teti: What are the limits of such executive action?

Johnson: They operate like prosecutorial discretion in terms of what our priorities are, and what they are not. So, our top line priorities are those who represent threats to our national security and public border security, and because we have a limited amount of resources we have to decide, as a matter of policy and prosecutorial discretion, where we want those resources focused. For example, when I was an AUSA (1989-1991) enforcing federal narcotics laws, we had a crack epidemic in New York City. So I wasn’t prosecuting many marijuana cases, I wasn’t prosecuting many powder cocaine cases, it was all crack cocaine. That was where our resources were focused; it was an act of prosecutorial discretion.

Teti: 20 years from now we may very well see police drones fill the skies and retina scanners track the movement of everybody in every public space. As technology changes, government changes with it. In the future we may be safer, but less free. Is this a reality that we have to cope with, or one that we can avoid?

Johnson: No, I don’t accept that. I don’t know that society will look that way in 20 years. Your question, however, takes me back 40 years ago to the mid-60s. I’m old enough to remember that you could drive right up to the Capitol steps. One day my family decided that since we were in Washington we wanted to take a tour of the Capitol. My dad drove us there and we parked in the parking lot on the eastern front of the Capitol and the steps were just feet away. We parked our car and got out and walked up the steps into the Capitol. You can’t do that anymore because the security around the Capitol is so tight right now. Those days are probably gone forever and that’s too bad that we’ve lost that transparency and access to government installations. We’re going to need added security around the White House now as a result of the fence-jumping incidents. And those are things that you probably never crawl back from. That’s unfortunate in an open democracy like this. I dread the day when the Capitol is no longer open to the public for basic public visits except by appointment or reservation. I hope we don’t get there.