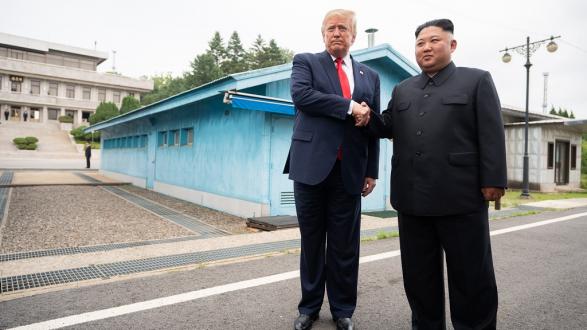 Although Kim Jong-un’s latest words on New Year’s Eve are a cause for concern, they seem to be aimed at gaining negotiating leverage rather than indicative of a real change in North Korea’s trajectory. The global community needs to encourage North Korean leader Kim Jong-un’s efforts to improve his country’s economy and make his country more of a “normal country.”

Instead of giving a New Year’s speech as he has previously done annually, Kim delivered a report concluding a four-day Workers’ Party Central Committee plenum. About 70 percent of the report focused on the economy, showing that improving the economy was of paramount importance to Kim. Kim candidly admitted that the economy was in trouble, revealing that a lack of economic progress in the past year was a major frustration for him. Kim highlighted areas that needed reform and declared that the global sanctions on his country were choking its economic potential.

Indeed, the economic damage of sanctions apparently drove Kim’s statements in the national security arena. Alleging that his country has received no economic benefit from dismantling a nuclear testing site and putting a moratorium on nuclear and long-range missile testing, Kim questioned his country’s all-out focus on economic development since the shift from the previous byungjin strategy (simultaneous development of the economy and military).

The onus is now on both Pyongyang and Washington to work out their differences if they are to avoid a reversion to the days of nuclear brinkmanship and high tension (so-called “fire and fury”) before the Pyeongchang Winter Olympics in 2018.

Claiming that the United States has not made any concessions despite his unilateral concessions on denuclearization, Kim implied that Pyongyang would resume nuclear and long-range missile testing and even unveil a “new strategic weapon” unless the sanctions were lifted.

Although these statements are disconcerting, they are clearly intended to maximize Pyongyang’s negotiating leverage, as Kim added that the extent and scope of his military response would depend on Washington’s response to his statements, making it clear that he was open to further negotiation. In a further demonstration of his openness to negotiation, Kim did not name Trump even as he criticized the United States and did not stage any military provocation despite the previously-announced “Christmas gift.”

The onus is now on both Pyongyang and Washington to work out their differences if they are to avoid a reversion to the days of nuclear brinkmanship and high tension (so-called “fire and fury”) before the Pyeongchang Winter Olympics in 2018. Apparently, North Korea has called for a gradual step-by-step denuclearization in exchange for the relaxation of sanctions, while Washington has insisted on a comprehensive roadmap that starts by defining the final denuclearized state and then spells out the steps leading to that state.

Whatever may have been the exact negotiating positions of the two sides, there was a difference between the two sides serious enough to cause a breakdown in the talks. This current impasse has resulted in Pyongyang’s demand for a new approach from Washington and Washington’s promise of a new flexibility.

Washington, Seoul, and Tokyo would do well to consult closely with Beijing and Moscow to discuss a common, gradual approach to denuclearization accompanied by partial easing of sanctions.

The two sides must now show real flexibility in their actions, not merely in their words. Pyongyang must take more tangible steps for denuclearization beyond the symbolic dismantling of an old testing site, and Washington must seriously consider partial relaxation of sanctions in response.

Perhaps a way to start would be finding a path forward on reconnecting rail and road links between the Koreas without explicitly violating the sanctions regime. Such an endeavor could help build the mutual confidence necessary for further progress in denuclearization and may eventually lead to the construction of a gas pipeline across North Korea carrying Russian gas into South Korea.

Although China and Russia’s recent proposal at the UN for partial relaxation of sanctions has gone nowhere, Washington, Seoul, and Tokyo would do well to consult closely with Beijing and Moscow to discuss a common, gradual approach to denuclearization accompanied by partial easing of sanctions.

Jongsoo Lee is a Pacific Council member, Senior Managing Director at Brock Securities, and Center Associate at the Davis Center for Russian and Eurasian Studies, Harvard University. He is also Adjunct Fellow at Hawaii-based Pacific Forum. He can be followed on Twitter at @jameslee004.

This article was originally published by the Council on Foreign Relations.