A Diplomatic Reality Check on U.S. Expectations in Iraq 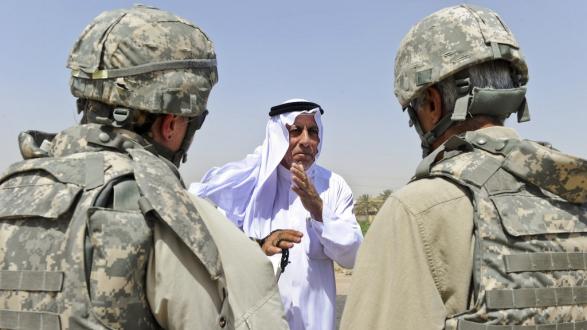 Arriving for my year-long stint as a U.S. diplomat in southern Iraq, I was forced to quickly come to terms with the nation’s powerful neighbor only miles away from my post in Basrah.

Iranian influence was everywhere: portraits of Supreme Leader Ali Khamenei were displayed throughout the city, Iranian businesses were deeply entwined in the local economy and Iranian pilgrims flowed into the region by the thousands during the Shia commemoration of Ashura.

Add to this a propaganda machine that delivered its message through dozens of TV channels and on social media, not to mention strong Iranian influence on local politicians and armed groups. In light of Iran's power, I had to adjust my expectations of what I could achieve. U.S. policymakers need to do the same – but that doesn’t have to mean defeat or disaster.

While the past 13 years of U.S. entanglement in Iraq have been characterized by competition and acrimony, Tehran and Washington do have shared goals and interests in Iraq today. Both want to defeat ISIL, which is already on the run in much of the country and facing a major offensive in Mosul.

Both want the current Iraqi government, led by Prime Minister Haider al-Abadi, to hold together at least until the fight to liberate ISIL-controlled territory is over. And in the long term, both America and Iran want Iraq to survive as a single state.

Beyond that, of course, there are sharply differing visions for a post-ISIL Iraqi state. Iran is cultivating influence among Shia clerics who subscribe to its theocratic vision of governance. It controls numerous militias that undermine the authority of the state and pursue sectarian aims. The United States would prefer a pluralistic, secular, and democratic Iraq with a foreign policy independent of Tehran.

Tehran and Washington do have shared goals and interests in Iraq today.

The sobering truth, though, is that there is little the United States can do about Iranian influence in Iraq, which has increased multifold since the emergence of ISIL. Despite the U.S.-led air campaign against ISIL, most Iraqi Shia, the majority of the population, see Iran as a more favorable and stable security partner.

During my time in Basrah, Iraq’s second city and center of the southern Shia heartland, I was shocked to discover that many Shia actually believe that the United States secretly supports ISIL. Such views reflect a deep deficit of trust, stemming from what many Iraqis, especially the Shia, perceive as inconsistency in U.S. engagement in Iraq over three decades.

Memories run deep: of U.S. support for Saddam Hussein in the 1980s, of U.S. failure to support the Shia uprising in the early days following the first Gulf War in 1991 (despite encouraging the uprising), of U.S. support for sanctions in the 1990s that hurt many ordinary people, and of U.S. disengagement after 2011.

My Iraqi interlocutors would incredulously ask how it is possible that the United States could defeat Saddam’s armies in a matter of weeks in 2003, but cannot defeat ISIL’s ragtag forces. There must be secret agenda, they concluded.

Iran, by contrast, is seen to have come quickly to Iraq’s aid as ISIL overran large swaths of Iraqi territory, just as it sheltered Iraqi Shias fleeing Saddam’s repression two decades ago. Many leading Iraqi politicians spent decades in Iran and have close ties there. Thousands of Iraqis even fought on the Iranian side in the Iran-Iraq War in the 1980s. Today, hundreds of thousands of Iranian pilgrims cross the border every year to visit religious sites in Iraq. Iraqis reciprocate for business and pleasure.

The sobering truth is that there is little the United States can do about Iranian influence in Iraq, which has increased multifold since the emergence of ISIL.

While ISIL has controlled some Sunni areas of Iraq for two years, Iran-linked Shia militias have been the effective security sector in many parts of southern Iraq for over a decade now. Liberating Mosul from ISIL will not solve this problem.

In looking to Iran, many Iraqis are making a perfectly rational choice. Iran, however imperfect, is likely to be there in 10 years. The United States' future in Iraq is uncertain.

So what does this all mean for U.S. interests and engagement in Iraq after ISIL is defeated?

Washington policymakers need to disavow themselves of the notion that we can somehow beat Iran at influencing Iraqi hearts and minds. This will mean swallowing some bitter pills, because the influence of Iran has been truly destructive to U.S. goals in Iraq in the past.

Iran needs a seat at the table when the post-ISIL bargain is negotiated. Encouraging a unified, legitimate Iraqi state will depend on political reconciliations among Sunnis, Shias, and Kurds. Tehran has influence over the Shia groups that are key to this. The experience of the nuclear deal, and the added lines of communication and leverage it afforded, would enable such engagement between the United States and Iran over the future of Iraq.

Even as Washington needs to accept the reality of Iranian influence, America can still offer things that Iraqis want: technology, investment, and higher education. Iraqis are hungry for English language schools. They would love expanded scholarship opportunities for study in the United States. And though the climate is difficult, there are opportunities for investment by U.S. firms in areas such as franchising. These are all areas where Washington could increase its post-ISIL engagement with Iraq.

Finally, there is a force beyond the reach of both the United States and Iran, but one that may now work to our advantage. Iraqi nationalism is not dead. Even those Iraqis I met who saw Iran as a more stable partner would also quietly admit that they do not favor the Iranian model of rule. They do not appreciate heavy-handed Iranian meddling in Iraqi affairs.

Much of the Iraqi Shia clerical establishment feels the same way. On top of this, protests over the past year show there is much pent-up popular frustration with the religious parties and groups Iran prefers.

Just like the United States did with the 2003 invasion, there is a point where Iran may overreach, offering a wider opening for American diplomacy – as long as we don’t simply walk away after ISIL is gone.

Dr. Mieczyslaw P. Boduszynski is an assistant professor of politics at Pomona College and a former U.S. diplomat. Read more about his background.