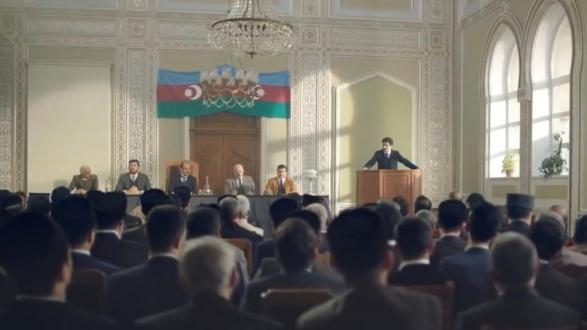 The establishment of the Azerbaijan Democratic Republic two years earlier, on May 28, 1918, had been an event of historic magnitude. Not only was it the first secular and parliamentary republic in the Muslim world, but also the first majority-Muslim nation granting women the right to vote and to run for election, with a law passed in July 1919.

That law on equal voting rights to all men and women upon the age of 20, regardless of their racial, ethnic, religious, or other background, was fascinating in many regards, making Azerbaijan one of the first countries in the world to ensure such inclusive voting and election rights for all its citizens.

The Parliament and Cabinet of Ministers of Azerbaijan reflected the multiethnic and multi-religious mosaic of the country, including the representatives of various religious and ethnic minorities, such as Jews, Armenians, Russians, Germans, Poles, and others. 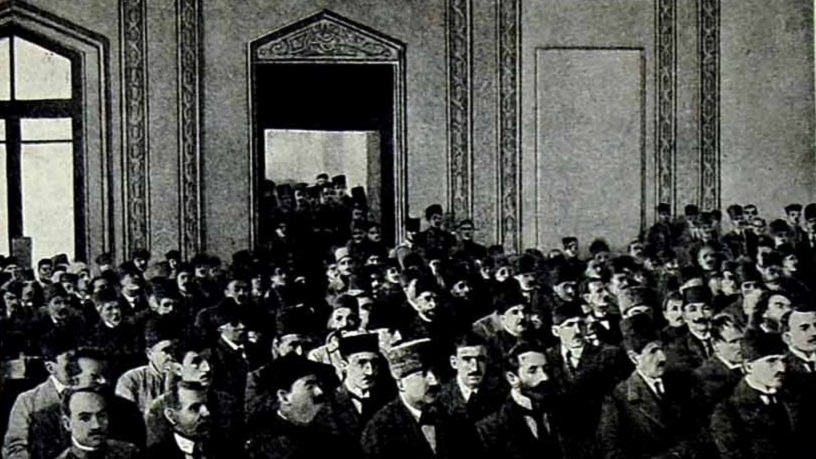 The first meeting of the Parliament of Azerbaijan, 1918

The new republic, located between Soviet Russia and the Persian Empire, also managed to pursue a very active diplomacy aimed at achieving international recognition for this young democracy. One of the first acts of the new state was to send a diplomatic mission to the Paris Peace Conference, led by Alimardan Bey Topchubashov, Speaker of the Parliament.

On May 28, 1919, the Azerbaijani delegation met with the U.S. President Woodrow Wilson in Paris, what marked the first high-level Azerbaijani-U.S. diplomatic meeting. President Wilson was so impressed by the meeting that upon his return to the United States he referred to it several times in his public speeches during the tour of western and southern U.S. states in September 1919.

Until two years ago, the only known reference to meeting the Azerbaijani delegation was the one he made in his speech in San Francisco. However, while researching the U.S. historical archives, I discovered another reference—the one that President Wilson made in his remarks in Bismarck, North Dakota, on Sep. 10, 1919. Here is an abridged version of what President Wilson said:

“I have told many times...of the experience that I had in Paris. Almost every day of the week...I was receiving delegations. Delegations...from some parts of the world... I do not think they were in geography when I was at school...Did you ever hear of Azerbaijan, for example? A very dignified group of fine looking men came in from Azerbaijan. I...found that it was a very prosperous valley region lying south of the Caucasus and that it had a great and ancient civilization..."

“Do you know where Azerbaijan is? Well, one day there came in a very dignified and interesting group of gentlemen who were from Azerbaijan. I was talking to men who talked the same language that I did in respect of ideas, in respect of conceptions of liberty, right and justice.”

Interestingly, out of all delegations, especially from the new republics, President Wilson met in Paris, he only mentioned the Azerbaijani delegation—and not once, but several times—which shows a deep impression the Azerbaijani diplomats as well as the nation they represented left on the U.S. president.

As a result of this meeting, as well as many other meetings and efforts of the Azerbaijani diplomats in Paris, in January 1920, the Azerbaijan Democratic Republic was recognized de-facto by the United States and other democracies.

An independent, strategically located and rich Azerbaijan was obviously a major target for Bolsheviks, as it possessed one of the world’s largest reserves of oil, to the extent that Vladimir Lenin famously said that “without Baku’s oil the Soviet state cannot survive.”

So, on April 28, 1920, the independence of Azerbaijan was cut short by the 30,000 strong Red Army invasion, followed by its forced incorporation into the USSR in 1922.

Former LA Times reporter Hugh Pope notes in his book that “the Azeris did not surrender their brief independence of 1918-20 quickly or easily. As many as 20,000 died resisting... the reconquest.”

The fall of Azerbaijan’s first republic paved the way for the swift invasion and Sovietization of other independent republics like Armenia, Georgia, and Ukraine.

Based on its own experience of multiculturalism and interfaith acceptance, where Shia and Sunni Muslims, Christians, Jews, and others continue to live in harmony and mutual respect, Azerbaijan is deeply engaged in promoting these values in the region and beyond.

Ironically, almost all leading Azerbaijani communists who betrayed their independent nation and championed the Soviet invasion were later executed by firing squads on “counter-revolution” charges during the Stalinist purges of 1930s, in the best example of Jacques Mallet du Pan’s adage: “Like Saturn, the revolution devours its own children.”

One hundred years later, Azerbaijan, which restored its independence from USSR in 1991, is today the largest economy in the region, implementing major transnational energy and transportation projects, like the newly launched railroad connecting Asia with Europe or vastly contributing to the energy security of European nations.

But most importantly, based on its own experience of multiculturalism and interfaith acceptance, where Shia and Sunni Muslims, Christians, Jews, and others continue to live in harmony and mutual respect, Azerbaijan is deeply engaged in promoting these values in the region and beyond.

Nasimi Aghayev is a Pacific Council member, the consul general of Azerbaijan to the Western United States, and the dean of the Los Angeles Consular Corps.