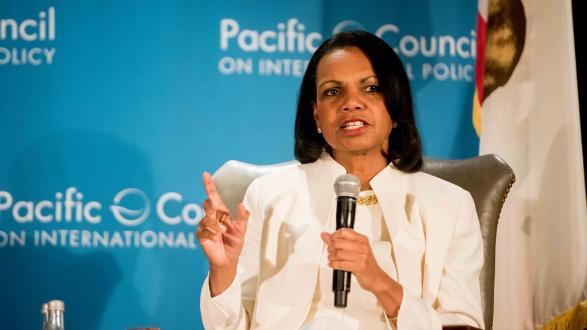 Former Secretary of State Condoleezza Rice recently joined the Pacific Council for a discussion on the transitional period following the Cold War and her new book with co-author Philip Zelikow, To Build a Better World: Choices to End the Cold War and Create a Global Commonwealth.

One of the lessons the United States learned during that time was about the effectiveness of U.S. foreign aid. A particularly successful example of this type of aid cited by Rice was the reconstruction of Poland. The United States’ intent was to dismantle the economy already in place, which was successful because it had the support of Polish leaders.

These leaders wanted to see the market value of the country’s currency increase, and the U.S. response was to offer $1 billion as a token of faith in the Polish effort. The United States also pledged $100 million to the Entrepreneurship Fund to give mini-loans to Poles who wanted to start their own businesses. The aid program was so successful that Poland made a profit. The fund doubled in value and the United States agreed to split the proceeds.

After the collapse of the Soviet Union, Russia’s reforms towards improving the economy were both too rapid and too slow.

Among other Eastern European countries whose economies were structured similarly to Poland’s before the U.S. aid package, Rice said that there were two key advantages setting them apart from their Eurasian neighbor, Russia. First, most of these nations were experiencing indigenous movements for democracy, with a majority of their citizens in support of a transition.

Second, in countries such as Czechoslovakia and Poland, their populations were largely homogenous, whereas in Russia there was and is a large blend of nationalities and ethnicities and one Communist Party which made it much more difficult to enact change in the same way. After the collapse of the Soviet Union, Russia’s reforms towards improving the economy were both too rapid and too slow. Problems abounded when oligarchs privatized public assets, essentially taking everything and leaving the state in disarray with no protection for its citizens. The pension system collapsed and people felt unsafe and insecure.

Russia as we know it today was largely shaped by Boris Yeltsin’s decision to appoint the up-and-coming former KGB agent Vladimir Putin to lead the country. Had another leader been chosen, the country’s path could have been radically altered, because Putin made the path to democracy a difficult one for the country.

Gorbachev admitted to President George H.W. Bush that one of his biggest mistakes was lying about the Chernobyl disaster in the first year of his presidency.

Looking back, reasons why the collapse of the Soviet Union came about as it did could be found in the fall of the Berlin Wall. World leaders at the time, including Mikhail Gorbachev, wondered if they should quash any rebellion at the outset, like China did in Tiananmen Square in 1989.

At the time of the Wall’s fall, Gorbachev likely believed that Russia could in fact become a normal country, and pursuing that goal was connected to many actions that he perceived to be his biggest mistakes. In fact, Gorbachev admitted to President George H.W. Bush that one of his biggest regrets was lying about the Chernobyl disaster in the first year of his presidency.

Moving on to a discussion about the George H.W. Bush’s administration and its support for the reunification of Germany, Rice said that President Bush managed to help reunify the country in a way that allowed for German dignity and autonomy, as well as leaving room for the USSR’s dignity to remain intact.

While the EU was founded on good intentions of mutual support and regional unity, Rice said there are “four horsemen of the apocalypse” that threatened and continue to threaten its unity: populism, nativism, protectionism, and isolation.

Meanwhile, Eastern Europe did not have the same experience as Germany, which has had lasting consequences for the European Union (EU) today. While the EU was founded on good intentions of mutual support and regional unity, Rice said there are “four horsemen of the apocalypse” that threatened and continue to threaten its unity: populism, nativism, protectionism, and isolation. However, Rice said she believes that the arc of democracy looks promising, even in a place like Russia.

Rice also discussed Russian election interference, a practice Russia commonly uses to stir up disaffected populations and divide nations. Election interference is largely something that world leaders have come to expect. However, Rice explained there is a need for a better public-private relationship when it comes to the internet, because it is the first giant and powerful entity not owned by governments. The only way moving forward is to find new mechanisms to ensure electoral fairness.

Check out photos from the event on our Flickr page.