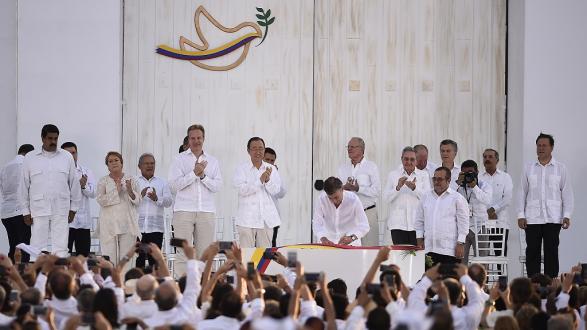 The peace agreement between the Colombian government and the Revolutionary Armed Forces of Colombia (FARC) will likely move forward, but there are challenges left to overcome, Ms. Katja Newman and Dr. Abbey Steele told Pacific Council members during a Situation Briefing teleconference on the prospect of peace between the government of Colombia and FARC.

Newman is the founder and president of KSN Consulting, Inc. Steele is a professor of social and behavioral sciences at the University of Amsterdam. The discussion was moderated by Dr. DJ Peterson, president of Longview Global Advisors.

After Colombian voters rejected the peace deal President Juan Manuel Santos struck with FARC rebels in October 2016, negotiators went back to the drawing board. An amended agreement was recently approved by Colombia’s Congress. The deal cleared a critical hurdle on December 13, 2016, when Colombia's Constitutional Court ruled in favor of the government's plan to fast track the accord.

"This new peace deal is quite successful in comparison to previous attempts because there is a plan in place to demobilize the rebels, which is a clear distinction from previous peace attempts," said Steele. "FARC formed in 1964 and has been fighting the Colombian government since. This is the first time in all those years that the Marxist-Leninist organization has recognized Colombia's government and economic system."

"This is the first time in [since 1964] that the Marxist-Leninist organization [FARC] has recognized Colombia's government and economic system."

Steele added that there are still some existing risk factors involved with the new peace agreement.

"One is that the [National Liberation Army or ELN] has not begun peace talks yet with the government," she said. "In previous demobilizations, combatants simply join other armed groups. Some FARC fighters may join ELN."

Newman said that the rejection of the original peace deal by voters was surprising but small. The margin was less than one percent.

"There are several reasons it wasn’t approved, including low voter turnout and terrible weather that day," said Newman. "Also, although he’s popular internationally, President Santos’ popularity at home is quite low. And like we’ve seen in the UK and the United States, there are these latent feelings of frustration that just didn’t show up in the polls."

Peterson noted that one of the lessons learned this year is that referendums should not be used to decide very important issues.

"There is a lot of opposition from Republicans in the United States to the peace agreement with FARC rebels, so it’s something to keep an eye on."

Newman also said that there is a lot of concern in Colombia right now about what will happen next under the Trump administration.

Steele pointed out that the cocaine trade in Colombia will continue despite the peace agreement between the government and FARC.

"Some of the rebels have specialized knowledge of the trade, so we can expect some of them to continue with the cocaine trade," she said. "As part of the deal, FARC is supposed to help transition farmers from coca to other crops, but cocaine is quite lucrative. As long as it remains illegal, illegal organizations in Colombia will regulate it."

Newman agreed, adding, "If demand for cocaine stays the way it is, other illicit actors than FARC will pick up the trade."