CIA Director: Scourge of Terrorism Affects Us All 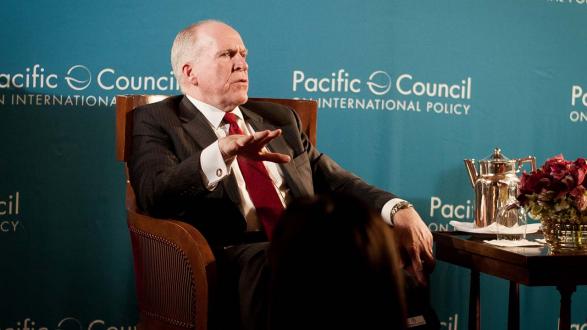 Following a recent meeting of the National Security Council, President Obama told press that there will be “no letup against the Islamic State of Iraq and the Levant.” The United States, he said, remains “relentless in going after them.” What began as an al Qaeda splinter group has burgeoned into a terrorist network spanning multiple countries with affiliates that carry out attacks beyond the borders of their so-called caliphate. What will it take to finally defeat the group?

According to the Director of the CIA, long-standing adversaries like the United States and Russia have a common interest to work together.

“The scourge of terrorism affects our collective interest,” explained John Brennan, Director of the Central Intelligence Agency, at a Pacific Council event on February 23. “There are things we can do and should do with Russia.”

Among America’s top intelligence adversaries, said Brennan, the Russians are “right up there as far as being the most formidable.” Even still, he has had “a number of conversations over the last couple of months with Alexander Bortinikov, who is the head of the FSB, about the terrorist threat.”

Still, Brennan did not mince words when it came to the consequences of Moscow’s intervention in Syria, telling the audience: “Russia’s support for President Assad of Syria is what’s keeping that conflict going.” Russian airstrikes in Syria, which began in September 2015, overwhelmingly target anti-Assad rebels.

“Clearly Russia, under President Putin, is trying to assert itself more and more on the world stage,” Brennan remarked, “in terms of wanting to make sure that Russia’s voice is heard and its influence is felt, not just in the near abroad of Russia, but also in the Middle East.”

When asked to comment on the U.S. ability to counter the social media prowess of ISIL, Brennan lamented that the terrorist organization has “been able to exploit that social-media environment to propagate, to recruit, to have their narrative carry the day with so many individuals around the globe.”

“You would think that the United States, which is the leader in communication and entertainment and media, would be far ahead of our adversaries in representing the truth and the American way,” he said. “The truth is elusive at times, and there is a lot of debate about what it is that we are doing.”

On China’s aggression in the South China Sea

Located between the Pacific and Indian oceans and encompassing an area of 3.6 million square miles, the South China Sea has in recent years become a source of considerable tension between China and other countries in the region.

Where does China’s aggression in the area originate? According to Director Brennan, it starts at the top: “President Xi Jinping has a clear strategic vision about what he wants to accomplish during his time as President of China – both on the economic world stage and in terms of the influence China has, particularly in its geographical neighborhood.”

“We don’t want smaller states there to be cowed by China’s dominance in the region."

China’s activity in the South China Sea has been predicated on “a very deliberate and methodical strategy,” he argued. “They believe that this is their area, and they are interested in seeing if they can reduce U.S. influence there.”

President Obama’s “pivot to Asia” was a direct response to their strategy, Brennan said. “We don’t want smaller states there to be cowed by China’s dominance in the region,” he said.

Brennan defended the use of drone technology, both in terms of intelligence gathering and as a tool of war.

“Drones have multiple uses,” he stated. “They are tremendously capable in terms of intelligence gathering because you can get them to places that you may not be able to get manned aircraft or people.”

“As instruments of war, they have been embedded within the U.S. military’s array of aircraft for a number of years. They have tremendous capability to go after the targets they are meant to go after.”

Brennan also responded to a comment about the humanitarian reports of civilian casualties caused by drones, saying: “I can tell you that a lot of these reports very much misrepresent the facts. Have civilians been killed? Yes. It’s very unfortunate when that happens, but in war sometimes these things happen. This is a weapon that can be used in a manner that really does minimize civilian casualties.”

When asked by a Pacific Council member to address the issue of cybersecurity, the CIA Director responded that Americans “should be very concerned.”

“What is it that keeps me up at night? It is the increasing vulnerabilities of our infrastructure of our society, because of the emergence and growth of the digital domain.”

How is the CIA responding to this issue? “We set up a new Directorate of Digital Innovation last October, because we need to master that environment,” Brennan replied. “We need to understand not just the vulnerabilities, the challenges there, but also the opportunities. We need to embrace the digital wave, but we also need to be ahead of it.”