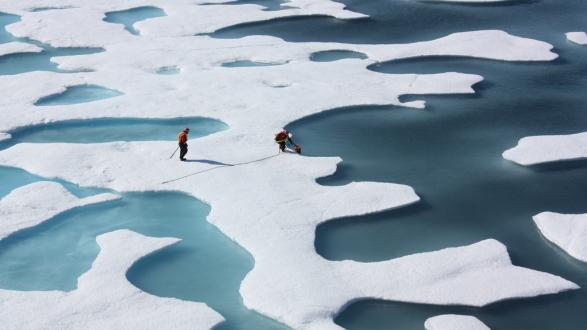 I recently returned from the United Nations climate talks in Bonn, Germany, where international leaders wrestled with how to collectively prevent global temperatures from rising to a catastrophic level.

Ceres, WWF, and Climate Nexus spearheaded the U.S. Climate Action Center, a 27,000-square-foot pavilion where 44 events drew tens of thousands of attendees, assuring the world that "We Are Still In" as an American society. Representatives from U.S. states, cities, businesses, and investors came out in force to discuss the climate impacts the United States is already experiencing and share what they are doing—and what still needs to be done.

Amid the talk of mitigating greenhouse gas emissions, I couldn’t help but notice how often water resources came into the equation—and rightfully so. In fact, at the 23rd Conference of Parties (COP23), there was an entire day devoted to Water Action and a buzz on Twitter around #bluelineBonn. It was fitting that the climate talks were situated on the banks of the Rhine River where engineers are grappling with how to design solutions to prevent the more frequent floods resulting from climate change.

"Water and climate change are directly related," said Paulo Sergio Bretas de Almeida Salles, the director of ADASA in Brazil (a regulatory agency for water and sanitation), speaking at the COP23 Water Action Day. "Everything that happens on earth based on climate has some relationship with water."

Many of the water management solutions agreed upon by stakeholders at COP23 are ones that we have been debating and advancing in California.

We definitely know the truth of that statement in California. Gov. Jerry Brown, California businesses, and others highlighted to the global community that California is still reeling from the most severe drought in state history, the length and intensity of which scientists link to a changed climate; and that we are literally still tinged by last month’s wildfires, whose virulence, scientists say, was because the drought was followed by a one-two punch of the wettest winter on record, then the hottest summer on record, creating new kindling for fire. There were similar stories shared from around the globe.

As the climate gets warmer, smart water management grows more important. At COP23, the parties attending the UN Convention on Climate Change recognized that. In fact, the UN has warned of worsening water scarcity as the global climate warms, with its World Water Development Report predicting two years ago that the world will face a 40 percent water shortage by 2030 unless we change our ways.

And many of the water management solutions agreed upon by stakeholders at COP23 likely to have the most potential for enhancing water supplies for the future are ones that we have been debating and advancing in California.

Action Plans—Globally and in California

Many participants in COP23’s Water Action program cosigned what they called a "nature-based solution declaration" to encourage the use of natural systems such as wetlands and healthy watersheds to improve water supplies.

Many stakeholders in California have been encouraging nature-based solutions, believing that watershed protection and groundwater replenishment will enhance future water supplies and prevent California from running out of water, as happened in parts of Tulare County during the drought.

In 2016, California passed a bill, AB 2480, which defines source watersheds as part of the state’s infrastructure. As another example, rice and almond farmers have allowed their fields to flood with rainwater in the off-season so the extra water will infiltrate into groundwater basins.

The importance of data on water availability and water use, and the need to integrate various sources of data so they are useful for planning by governments, businesses, farmers, and families, is as true here as it is internationally.

Data gathering and improving data interoperability was a second water management theme discussed at COP23’s Water Action Day as well as a solution pursued in California. The importance of data on water availability and water use, and the need to integrate various sources of data so they are useful for planning by governments, businesses, farmers, and families, is as true here as it is internationally.

In California, water stakeholders and concerned legislators began to address the need for better water data with the passage of two bills in 2015. One authorized the State Water Resources Control Board to develop measurement and reporting requirements for entities that divert or use surface water, including farmers and local water districts. Another, AB 1755, the Open and Transparent Water Data Act, directs the state’s water department to create a statewide water accounting system and an online water transfer clearing house.

Agriculture’s role in improving or damaging water supplies—depending on farms’ water management practices—was a third theme that surfaced at COP23 and is beginning to be tackled in California.

The indisputable connection of water and climate stewardship should continue to be part of our international efforts to stave off global warming.

Agriculture uses 70 percent of the globe’s freshwater supplies and as much as 80 percent of California’s freshwater. A growing number of farmers in California recognize that careful tending of soil health and practicing efficient use of fertilizer can help water supplies since healthy soil retains water and fertilizer optimization reduces nitrate runoff into streams and rivers. A plan to study and promote those practices was also taken up at COP23.

Lastly, the international negotiators discussed the connection between energy and water—that it takes energy to produce clean water and that it often takes water to produce energy.

In California, we’ve learned that energy efficiency is good for our economy and helps us conserve water. We’ve learned that protecting water resources better prepares us for a warming planet.

It was extremely important for COP23 to include water as a main theme. The indisputable connection of water and climate stewardship should continue to be part of our international efforts to stave off global warming.

This article was originally published on Water Deeply.

The views and opinions expressed here are those of the author and do not necessarily reflect the official policy or position of the Pacific Council or Water Deeply.