Is America Still a Champion of Democracy in the Trump Era? 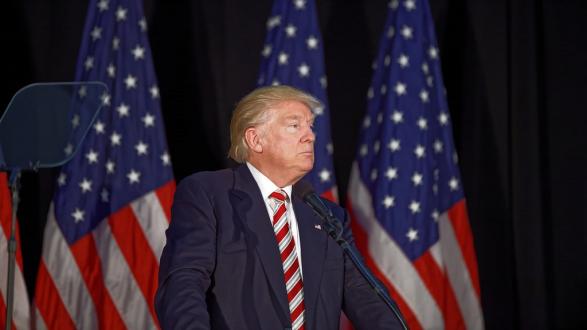 Does U.S. democracy promotion have a future in the Trump administration? The national security strategy released by the White House this week suggests that this president is not ready to abandon values-based foreign policies entirely.

The document states that American democracy "serves as an inspiration for those living under tyranny." It contains an "American values" section that calls for the United States to support those "who seek freedom, individual dignity, and the rule of law" with "words and actions." It continues, "We may use diplomacy, sanctions, and other tools to isolate states and leaders who threaten our interests and whose actions run contrary to our values. We will not remain silent in the face of evil. We will hold perpetrators of genocide and mass atrocities accountable."

Despite these assurances, the Trump administration’s first national security strategy contains far less democracy promotion content than its immediate predecessors from the Obama administration, and is worlds away from George W. Bush’s "freedom agenda." Its focus on great power, economic competition, and "hard" interests over ideals is unmistakable. Its release comes on the heels of months of statements and symbolic actions suggesting that democracy promotion is no longer a U.S. foreign policy priority.

U.S. democracy promotion has been selective and highly inconsistent, often applied only if other interests are not at stake.

Trump’s penchant for "strongmen" such as Abdel Fattah Sisi of Egypt and Rodrigo Duterte of the Philippines sent powerful signals about the Trump administration’s readiness to embrace autocrats. There have been other signals as well, such as Trump’s statement to Arab leaders earlier this year that "America is a sovereign nation and our first priority is always the safety and security of our citizens. We are not here to lecture; we are not here to tell other people how to live."

U.S. democracy promotion has been selective and highly inconsistent, often applied only if other interests are not at stake. In recent years, the United States has vigorously promoted democracy in countries such as Ukraine and Myanmar while remaining silent in the face of repression and human rights abuses in allies such as Saudi Arabia.

In 2011, at the height of the Arab Spring, President Obama dropped U.S. support for a longstanding ally, Hosni Mubarak of Egypt. He subsequently delivered a forceful speech vowing to support the democratic aspirations of the youthful protesters who had filled the streets and squares of Arab capitals during the uprisings. But two years later, when the Egyptian military orchestrated a coup against a democratically elected president, the Obama administration failed to forcefully condemn it, and it also remained largely silent on continuing repression in the Gulf kingdom of Bahrain.

Historically, U.S. democracy promotion has been not only inconsistent, but also cyclical.

Obama’s policy was influenced by his own realist thinking and to some large degree was also a reaction to what he saw as Bush’s messianic rhetoric and overreach. He thus toned down both the rhetoric and scope of U.S. democracy promotion in the first part of his presidency, only to embrace it wholeheartedly during the events of the Arab Spring, before dialing it back yet again by the end of his presidency.

In light of these historical twists and turns in U.S. democracy promotion policies, how concerned should proponents of U.S. democracy promotion be about Trump’s strategy? On one hand, Trump’s proclivities are clear, and the "America first" basis of his foreign policy presents a direct challenge to the ethos of democracy promotion and have emboldened dictators around the world. Words emanating from the most powerful politician in the world, even if they are delivered in tweets, matter. This makes the job of promoting democracy much harder.

At the same time, in the first year of the Trump presidency we have seen many instances where influential U.S. foreign policy actors, from the State Department to the National Security Council to Congress, have vigorously pushed back against Trump’s surrendering of America’s traditional democracy promoting role and won key policy battles. We have observed this in countries such as Hungary and Cambodia, where U.S. pressure continues to check the impulses of authoritarian governments despite the efforts of autocrats in both countries to cozy up to the Trump administration.

We saw it in Egypt, where the State Department recently froze $100 million of U.S. assistance in response to ramped up repression by the Egyptian regime. Moreover, many of the tools of U.S. democracy promotion are embedded and institutionalized in programs, laws, and aid mechanisms.

The Trump administration’s rhetoric and priorities have challenged the credibility of the United States as a champion of democracy, and that damage will not be easily undone.

Congress continues to mandate yearly human rights reports. Foreign beneficiaries of U.S. military training programs are vetted for a record of human rights abuses. Countless U.S.-funded assistance programs to civil society and political parties, many of them established under the Reagan administration, live on under ongoing funding allocations. U.S. foreign service officers continue to advocate for democratic reform and human rights. And dissidents around the world continue to look to the United States for support.

In other words, democracy promotion as a component of U.S. foreign policy is a deeply embedded norm, and the language in the new national security strategy confirms its resilience. Still, the Trump administration’s rhetoric and priorities have challenged the credibility of the United States as a champion of democracy, and that damage will not be easily undone.

Mieczysław Boduszyński, Ph.D., is a Pacific Council member, an assistant professor of politics at Pomona College, and a research fellow at the Center for Public Diplomacy at the University of Southern California. He was a foreign service officer with the U.S. Department of State and a diplomat who served at the U.S. embassies in Albania, Kosovo, Japan, Egypt, Libya, and Iraq. He is author of Regime Change in the Yugoslav Successor States.