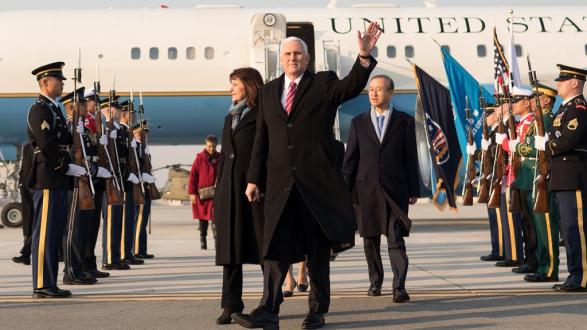 Knowledgeable observers fret less about Uncle Sam’s muscles atrophying and more about a perceived political indifference to Chinese President Xi Jinping’s assertive and authoritarian turn. In recent weeks, the White House has launched an unprecedented counteroffensive against China to quell these anxieties.

But until Asian capitals are convinced Washington is closing the gap between its words and actions, the swashbuckling oratory will provide cold comfort.

The economic arena presents the most conspicuous chasm between rhetoric and reality. Washington has struggled to articulate a viable alternative to China’s monumental overseas infrastructure development program, the Belt and Road Initiative (BRI).

But until Asian capitals are convinced Washington is closing the gap between its words and actions, the swashbuckling oratory will provide cold comfort.

That may now be changing. While much of the focus during Asia’s summit season was on the president’s absence or the dueling positions staked out by Pence and Xi at the APEC Forum, the most interesting geopolitical development might have unfolded last month back in Washington.

Lost amid the political tumult, Republicans and Democrats managed to come together to launch an ambitious foreign aid initiative embracing the private sector.

With scant fanfare, legislators approved a doubling of financial assistance for infrastructure and other projects in developing countries. Their creation, the clunky-sounding United States International Development Finance Corporation, is armed with important new authorities, such as the ability to invest in equity, that make large-scale infrastructure possible. The IDFC will replace the Overseas Private Investment Corporation, which recently had faced elimination from an administration once hostile to foreign aid.

The Center for Strategic and International Studies (CSIS) called the little-known law, named the Better Utilization of Investments Leading to Development (BUILD) Act, "the most important piece of U.S. soft power legislation in more than a decade."

It's time to dial down the rhetoric and display greater confidence in America's unique attributes of openness, transparency, and rejuvenation.

The $60 billion program is just a small fraction of the over $1 trillion promised by China in construction investments to over 100 countries as part of the state-led BRI. But what matters is Washington is starting to show interest in making a more attractive offer. This down payment could catalyze much larger sums of private capital.

The administration must now build on this unheralded but potentially critical cornerstone of its Indo-Pacific strategy or risk China’s economic influence becoming an irresistible force.

Any smart and strategic approach will require additional congressional leadership.

Pence, who delivered a blistering speech railing against China last month for primarily domestic consumption, reportedly intended to present an affirmative vision of U.S. economic leadership to his Asian audience. But rather than lay down a comprehensive plan, Pence couldn't resist criticizing Beijing some more.

It's time to dial down the rhetoric and display greater confidence in America's unique attributes of openness, transparency, and rejuvenation.

While some Asia watchers believe China is gaining ground in this economic competition, the reality may be more complicated. Five years into BRI, basic questions linger over the economic viability of projects, and what they mean for Asia and the world. In Southeast Asia, it’s China that is behind relative to the United States’, Europe’s, and Japan’s much larger investments over many years.

To maintain their edge, U.S. leaders must rapidly explain their ideas to implement the BUILD Act, as part of a broader agenda to partner with other regional democracies and U.S. and foreign companies to offer market-oriented infrastructure options, related jobs, and skills.

The region wants to hear more about how the United States intends to coordinate with Japan and Australia on a recently-announced trilateral infrastructure initiative and to work together with the Association for Southeast Asian Nations and APEC.

Less talk and more action can persuade this vital region that the U.S. is finally getting serious about developing a truly comprehensive strategy for remaining engaged in the Indo-Pacific.

Tokyo is deftly employing an "all of the above" strategy that has also pledged $110 billion to mobilize private sector resources and agreed to cooperate on BRI projects in third countries.  Washington should pay closer attention to its example.

The administration can set a more positive example by practicing democratic values and sincerely promoting them overseas. Such a policy makes both dollars and sense: China faces a recent BRI backlash precisely because unlike the BUILD Act and other Western aid, its financing comes with few strings attached on human rights, corruption, environmental, or financial sustainability.

The administration can set a more positive example by practicing democratic values and sincerely promoting them overseas.

Recent elections in Malaysia, the Maldives, and maybe Pakistan suggest voters may be wary of hidden Chinese influence. U.S. policies that support democratic institutions, good governance, and accountability offer the benefit of waging this competition on terrain far more favorable to the U.S. The regional transparency initiative that Pence announced could be a modest, positive measure.

These early signs offer the promise of a better development model for the Indo-Pacific. Less talk and more action can persuade this vital region that the U.S. is finally getting serious about developing a truly comprehensive strategy for remaining engaged in the Indo-Pacific.

Atman Trivedi is a Pacific Council member and the managing director at Hills & Company, International Consultants.

This piece originally appeared on the Pacific Forum.