7 Facts You Need to Know About Homelessness in L.A.
Global Los Angeles 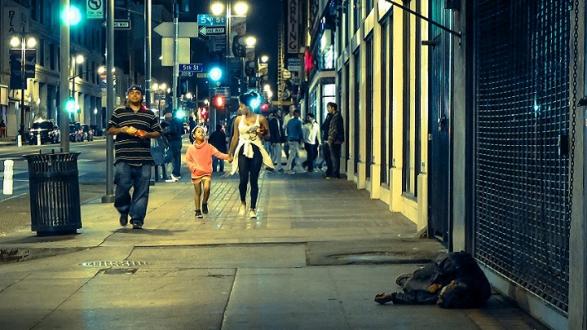 In May, the Los Angeles Homeless Services Authority (LAHSA) released the results of its 2015 Homeless Count. The count represents the largest homelessness census in the nation, and for individuals and organizations at the forefront of tackling the city’s homeless crisis, the results of the report are devastating. More people are displaced in L.A. today than in 2013.

Homelessness is a global issue. The United Nations Commission on Human Rights (UNCHR) estimates that more than 100 million people worldwide are unhoused. And inequality figures in: some of the most prosperous cities in the world are also overwhelmed with extreme poverty and homelessness.

Behind the glitz and glamour of Hollywood and the impressive revitalization of downtown L.A., many Angelenos suffer one of the world’s most overlooked human rights tragedies.

Here are seven important facts about homelessness in L.A.

1. There’s been a 16% increase in homelessness over the last two years

In the Greater Los Angeles area (not counting Pasadena, Glendale, or Long Beach) since 2013, there has been a 16 percent increase in the number of homeless men, women, and children. 41,174 people are now homeless in Los Angeles, compared to 35,524 two years ago. That’s an increase of 5,650 people.

2. Veteran homelessness is actually down 6%

Organizations like the United Way of Greater Los Angeles – seen in the video below – have been at the forefront of efforts to eliminate veteran homelessness in Los Angeles. Since launching the Home for Good Action Plan in 2011, United Way has permanently housed 12,818 veterans.

Over 7,500 veterans have been housed since 2013, but that rate needs to drastically increase to eliminate veteran homelessness in the city. According to United Way, “10 veterans become homeless each day, a rate that has tripled over the last few years.” In order to end veteran homelessness in Los Angeles by the end of 2015, United Way claims it needs to more than double its rate of housing.

3. As rental costs soar in L.A., so does poverty and homelessness

High rental costs are throwing more and more Los Angeles residents into poverty. According to the California Housing Partnership, roughly 1.5 million low-income households — half of which live in Southern California — do not have access to affordable housing. Since 2013, Los Angeles County rents have increased an average of 8 percent. Over 60 percent of Los Angeles residents spend more than a third of their total income on rent alone. “People are out there mostly because they can’t afford a place to sleep,” remarked L.A. Mayor Eric Garcetti in an interview.

This might explain why, according to the Count, the number of tents, make-shift shelters, and vehicles utilized by the homeless increased 85 percent last year. “The sheer number of people living on the streets and out of doors makes L.A. the homeless capital of the nation,” said Jerry Jones, the executive director of the National Coalition for the Homeless.

HUD defines a chronically homeless person as someone who has experienced homelessness for a year or longer, or who has experienced at least four episodes of homelessness in the last three years and has a disability. In 2013, there were 9,137 chronically homeless individuals in Los Angeles County – that number now stands at 14,118. United Way cited “significant declines in resources for rapid rehousing” as one of the reasons behind the 54 percent surge.

5. 44,359 people sleep on the streets and in shelters every night

The results of the Count revealed a 12% increase in the number of homeless people in L.A. County, from 39,461 in 2013 to 44,359 in 2015. On any given night in L.A., 12,226 homeless people are sheltered and 28,948 are on the streets. “Frankly, it’s a disgrace that 44,000 people sleep on the streets and in shelters each night in the County of Los Angeles,” said the Los Angeles Times Editorial Board. “L.A.’s city and county leaders won’t begin to make a dent in these numbers until they declare homelessness a public crisis and prioritize it when it comes to funding and services.”

6. Los Angeles spends as much as $87 million a year on policing the homeless

The City of Los Angeles spends as much as $87 million of its $100 million annual budget on law enforcement efforts targeting homelessness, according to a report released in April by City Administrative Officer Miguel A. Santana. Santana also revealed significant mismanagement and confusion on behalf of the city, stating that “[there] appears to be no consistent process across city departments for dealing with the homeless or with homeless encampments.”

The City Council voted in June to make it easier for law enforcement to break up homeless camps and remove personal property from parks and sidewalks, by decreasing the amount of warning time given to homeless people from 72 hours to just 24 hours. Mayor Eric Garcetti approved of the law at the outset, but has since ordered a moratorium on the policy until better safeguards are added to protect the homeless.

7. Los Angeles is the third most homeless city in the world – beating Mumbai and Mexico City

On a list that no city – especially a global city – wants to be on, Los Angeles ranks just below New York and ahead of Moscow, Mexico City, Jakarta and Mumbai in the size of its homeless population.