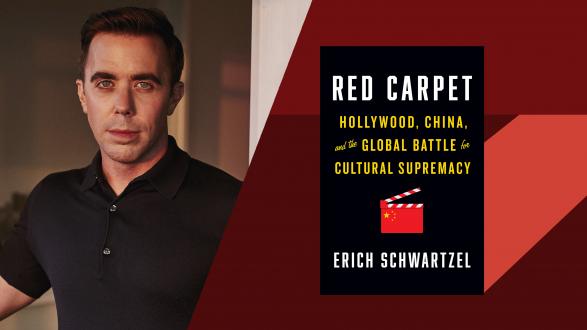 A virtual webcast featuring, Erich Schwartzel, reporter for the Wall Street Journal. Erich will address modern diplomacy through the lens of entertainment and discuss his latest book Red Carpet: Hollywood, China, and the Global Battle for Cultural Supremacy.

Erich Schwartzel's first book, Red Carpet: Hollywood, China, and the Global Battle for Cultural Supremacy, was published in February 2022 by Penguin Press. Red Carpet was a New York Times Editors' Choice, called a "page-turner" by Foreign Affairs, and named one of the 125 best books about Hollywood by Esquire. Schwartzel has reported on the film industry for The Wall Street Journal since 2013. His work on Red Carpet was featured on NPR's Fresh Air, CNN’s “The Lead with Jake Tapper,” and the Bret Easton Ellis podcast. Previously, he covered energy and the environment for The Pittsburgh Post-Gazette, where his work won the Scripps Howard Award for Environmental Reporting. He lives in Los Angeles.

Kimberly Marteau Emerson is a lawyer, civic leader, and human rights advocate. From 2013-2017, she lived in Berlin with her husband, former U.S. Ambassador to Germany John Emerson, where she worked both with the U.S. Embassy as well as independently to drive projects on multiple platforms, including the promotion of German immigration and integration efforts related to the 2015/2016 refugee crisis, and addressing the issue throughout Germany of bringing women to the economic and political decision-making table. Read more.