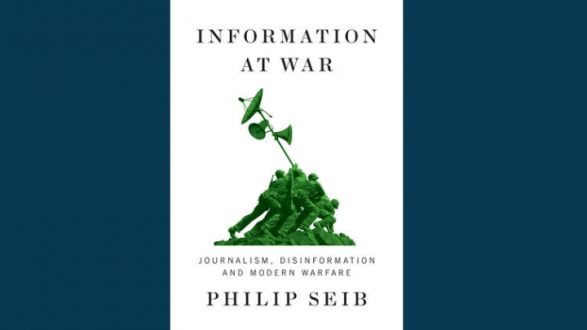 A virtual webcast featuring Professor Philip Seib, Professor Emeritus of Journalism and Public Diplomacy at the University of Southern California, on his new book Information at War.

Information at War offers a probing analysis of the role of information in warfare from the Second World War to the present day and beyond.  He focuses on some of the thorniest issues on the contemporary agenda: When untruthful and inflammatory information poisons a nation’s political processes and weakens its social fabric, what kind of response is appropriate? How can media literacy help citizens defend themselves against information warfare? Should militaries place greater emphasis on crippling their adversaries with information rather than kinetic force?

Professor Philip Seib, Professor Emeritus of Journalism and Public Diplomacy at the University of Southern California

Philip Seib is professor emeritus of journalism and public diplomacy at USC. He served from 2009-2013 as director of USC’s Center on Public Diplomacy, and as vice dean of USC Annenberg during 2015-2016.He is author or editor of numerous books, including Headline Diplomacy; Beyond the Front Lines; New Media and the New Middle East; The Al Jazeera Effect; Toward a New Public Diplomacy; Global Terrorism and New Media; Al Jazeera English; Real-Time Diplomacy; The Future of Diplomacy; and, most recently, Information at War: Journalism, Disinformation, and Modern Warfare.

Madison McAleese is an Associate Consultant with La Piana Consulting, a national management consulting firm focused on strategy, business planning, and strategic alliances. Madison has worked across nonprofit industries, including advocacy and civil rights groups, educational institutions, arts organizations, and more. Madison has a Master’s Degree in Public Diplomacy from the University of Southern California, a Master’s Degree in Christian Studies, and a Certificate in Nonprofit Board Consulting from BoardSource. Prior to consulting, she worked in strategic communications and public relations. She also served as former Communications Associate for the Pacific Council on International Policy, and was a fellow at the USC Center on Public Diplomacy from 2016-2018. She is based in Los Angeles.