WHAT ARE THE GEOPOLITICS OF ILLEGAL, UNREPORTED, AND UNREGULATED FISHING? 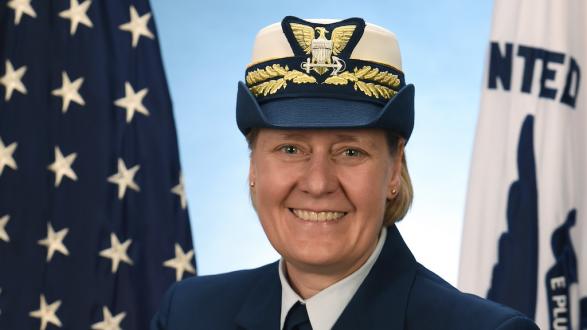 An overview of the global implications of the hollowing out of our ocean's most important and plentiful fish stocks, featuring Vice Admiral Linda Fagan of the U.S. Coast Guard. Learn about the local-to-global effects of illegal, unregulated, and unreported (IUU) fishing on the global environment and local communities.

If you are a Pacific Council member who would like to watch this conversation, reach out to us at engage@pacificcouncil.org.

Vice Admiral Linda Fagan assumed command of the Coast Guard Pacific Area in June 2018 where she serves as the operational commander for all U.S. Coast Guard missions from the Rocky Mountains to the waters off the East Coast of Africa. She concurrently serves as Commander, Defense Force West and provides Coast Guard mission support to the Department of Defense and Combatant Commanders. Vice Admiral Fagan is the Coast Guard’s first-ever Gold Ancient Trident, as the officer with the longest service record in the Marine Safety Field. Read more.

Dr. Green is the President and CEO of the Pacific Council. He is also a Research Professor of Communications at the University of Southern California. Read more.

Piracy long reigned as the leading threat to global maritime security, though it has recently been supplanted by something much more familiar: fishing. Specifically, illegal, unregulated, and unreported (IUU) fishing. IUU fishing is hollowing out our ocean's most important and plentiful fish stocks, and if left unchecked may lead to the deterioration of fragile coastal states, a rise in poverty, and conflict between fish-dependent nations.

Operation North Pacific Guard is conducted each year; originally focused on targeting illegal high seas driftnet fishing, a form of wild capture fisheries that poses a significant threat to living marine resources of the world's oceans. The practice involves the use of miles-long gillnets that indiscriminately catch and kill everything in the water column, including slow-reproducing species like marine mammals, sharks, and seabirds which may require many years to recover. In response to this threat, in 1991 the United Nations General Assembly passed a resolution that placed a moratorium on high seas driftnet fishing. In recent years the operation has been expanded to counter all forms of IUUF in the North Pacific Ocean. Participating nations contribute operationally by providing surface and air patrols, and sharing intelligence that facilitates at-sea inspections targeting IUUF activity. The United States Coast Guard leads the operation with one major surface asset with embarked MH-65 helicopter, and a C-130 aircraft.

Learn more about the U.S. Coast Guard's efforts to combat IUUF by visiting their website here, reading the press release here, and reading their report here.