BEYOND THE HORIZON: A CONVERSATION WITH SECRETARY STEVEN MNUCHIN 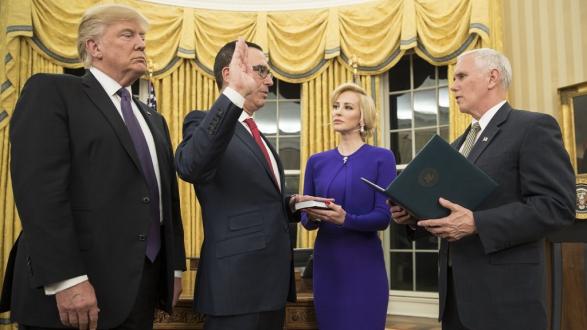 A keynote conversation as part of the Beyond the Horizon summit, featuring U.S. Secretary of the Treasury Steven Mnuchin.

Secretary Mnuchin will address the current challenges facing the United States in the face of the COVID-19 pandemic and the work being done to revive the economy. The Secretary will also discuss ongoing work with Congress to provide much-needed support to Americans, the national debt, and U.S.-China relations.

Please note: This conversation is reserved for summit participants attending at a Sponsorship level. To learn more about Beyond the Horizon sponsorships, contact Amie Kashon at akashon@pacificcouncil.org.

Steven Terner Mnuchin was sworn in as the 77th Secretary of the Treasury on February 13, 2017. As Secretary, Mr. Mnuchin is responsible for the U.S. Treasury, whose mission is to maintain a strong economy, foster economic growth, and create job opportunities by promoting the conditions that enable prosperity at home and abroad. He is also responsible for strengthening national security by combating economic threats and protecting our financial system, as well as managing the U.S. Government’s finances. Secretary Mnuchin has played a pivotal role in advancing the Administration’s economic agenda, including the passage and implementation of its key legislative achievement, the Tax Cuts and Jobs Act. He also leads the Treasury Department’s regulatory reform efforts. Secretary Mnuchin is chair of the Committee on Foreign Investment in the United States (CFIUS) and is a member of the National Security Council. He is responsible for using economic tools to combat terrorist financing and other threats to the United States and our allies. Prior to his confirmation, Secretary Mnuchin was Finance Chairman for Donald J. Trump for President and traveled extensively with the President. He also served as a Senior Economic Advisor to the President in developing his economic agenda. Prior to his confirmation he also served as Founder, Chairman, and Chief Executive Officer of Dune Capital Management. He founded OneWest Bank Group LLC and served as its Chairman and Chief Executive Officer until its sale to CIT Group Inc. Earlier in his career, Secretary Mnuchin worked at The Goldman Sachs Group, Inc. where he was a Partner and served as Chief Information Officer. He has extensive experience in global financial markets and investments. Secretary Mnuchin is committed to philanthropic activities and previously served as a Member of the Boards of the Museum of Contemporary Art Los Angeles (MOCA), the Whitney Museum of Art, the Hirshhorn Museum and Sculpture Garden on the Mall, the UCLA Health System Board, the New York Presbyterian Hospital Board, and the Los Angeles Police Foundation. He was born and raised in New York City. Secretary Mnuchin holds a Bachelor's Degree from Yale University. Read more.

Karen Elliott House retired in 2006 as publisher of The Wall Street Journal, Senior Vice President of Dow Jones & Company, and a member of the company’s executive committee. She is a broadly experienced business executive with particular expertise and experience in international affairs stemming from a distinguished career as a Pulitzer Prize-winning reporter and editor. Read more.