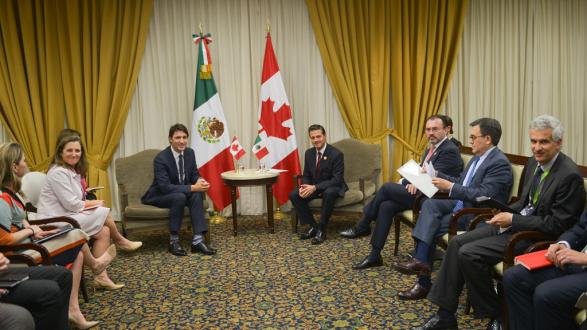 The teleconference featured Ambassador García de Alba and Consul General of Canada, The Honorable James Villeneuve, who discussed the updated version of the North American Free Trade Agreement (NAFTA) that is now known as the United States-Mexico-Canada Agreement (USMCA). The discussion was moderated by the Pacific Council’s Senior Officer for Initiatives, Amie Kashon.

The Consuls General discussed the various opportunities the new deal will provide, in addition to some of its shortcomings. García de Alba specifically highlighted the new focus on the energy industry in Mexico, noting that this sector was not included in the previous NAFTA deal. Investments in energy, which are now encouraged by the Mexican constitution, are expected to make North America completely independent in the future, and possibly competitive enough to overcome the Middle East as the most important energy producing region in the world.

The automobile and auto-parts industry, which makes up a third of North America’s free trade deals, was also subject to some changes under the USMCA. García de Alba emphasized the fact the three countries should put in greater efforts to ensure right adjustment to this rule within a reasonable timeframe, claiming that the $16 minimum wage is very "doable" in Mexico.

Investments in energy, which are now encouraged by the Mexican constitution, are expected to make North America completely independent in the future, and possibly competitive enough to overcome the Middle East as the most important energy producing region in the world.

For Canada, one of the biggest benefits reached by this agreement is the maintenance of Chapter 19, also known as the "Dispute Resolution Mechanism," which allows third party arbiters to assess disputes between the countries. In addition, another victory echoed by Villeneuve was the importance of the preservation of cultural industries, especially as Canada is home to many Indigenous communities and has two main languages – English and French.

NAFTA took Mexico and Canada’s trade industry from $500 million to $16 billion, and so the public is optimistic about the economic benefits of the new deal and of avoiding potential trade conflict.

After García de Alba and Villeneuve’s analysis of the deal itself, Kashon pointed to the long deliberation process and asked about the public reaction to the deal in both Canada and Mexico.

Both Consuls General agreed that the USMCA deal was met with a sense of relief. NAFTA increased trade from $500 million to $16 billion, and so the public is optimistic about the economic benefits of the new deal and of avoiding potential trade conflict.

"Seventy percent of our economy is directly linked to the States. A trade war would have been harmful for both Canada and the States," said Villeneuve.

García de Alba added that when the original NAFTA was created, there were many Mexican officials opposing the deal. But now, "the situation has changed dramatically to the point that both the current and the new elected governments are in favor of the deal."

"Seventy percent of our economy is directly linked to the States. A trade war would have been harmful for both Canada and the States," said Villeneuve.

During negotiations, there were some disagreements in deciding the timeframe of the deal, but ultimately, Mexico and Canada’s negotiators prevailed.

While U.S. negotiators were pushing for a five-year renewal period for the deal, both Canada and Mexico advocated for a more extended timeframe, which was ultimately approved. Under the "Sunset Clause," terms of the USMCA will expire after 16 years, and are subject to review every six years, at which point the United States, Mexico, and Canada can decide whether to extend the deal. Both García de Alba and Villeneuve explained how this motion was vital for the deal since a five-year timeframe is not a viable investment period for business owners.

But both Consuls General also expressed the need to continue the deliberations, especially when it comes to Section 232, which presents opportunities for the United States to exploit loopholes that allow for tariffs on the steel and aluminum industry, stating that it is an "unfair" form of transaction that should be discussed as soon as possible.

In his closing remarks, Villeneuve mentioned that the USMCA was necessary to remind Canadians about the value of this trilateral trade deal and the need to continue advocating for its existence.

While admitting the deal is not completely perfect, García de Alba reiterated that it’s ultimately a "win-win-win," which allows the new generation of North Americans to take part in a more sophisticated and organized deal that will turn the region into a globally competitive trade hub.

Listen to the full teleconference here: