US Policy on China: The Need for Pressure & Multilateralism 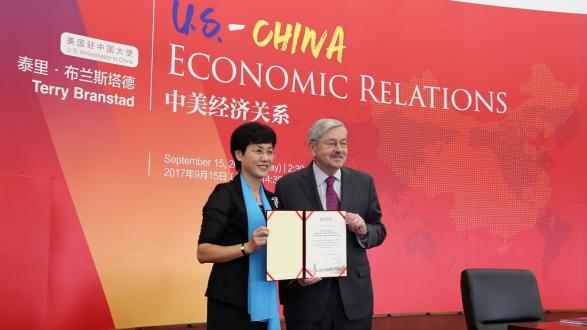 U.S. policy toward China should strongly emphasize pressure and deterrence, while acting multilaterally rather than unilaterally, experts said in the second installment of the Edgerton Series on Responding to a Rising China.

Moderator Ambassador David Lane, president of Sunnylands and former U.S. Ambassador to the UN Agencies in Rome, introduced the panel, noting that “we are at a really critical juncture in U.S.-China relations and it is the most important diplomatic relationship of our time.” Dr. Orville Schell, Arthur Ross Director of the Center on U.S.-China Relations at Asia Society Southern California, agreed right off the bat, stating, “we are now in one of the most unsettled periods of diplomacy between these two enormous and important countries.”

Schell highlighted the stark contrast of present U.S.-China relations with those of the past. “Forty years ago, when Nixon went to China, one was able to imagine that the two countries would slowly become more convergent,” he said. “If we simply put more effort into interaction between them, [including] more trade and cultural and academic exchanges, things would become less divergent and more convergent.” However, in recent years the relationship has gone in the divergent direction, becoming more hostile and skeptical.

The panelists discussed how many things have changed in the last two decades in terms of economics, politics, technology, and more, all contributing to the different relationship between the two powerful nations. According to Dr. Barry Naughton, Sokwanlok Chair of Chinese International Affairs at UC San Diego’s School of Global Policy and Strategy, “[in regards to] economics, everything has changed.”

The United States thought it could handle a rising China and guide it towards a liberalization of its economy and then society. But after the turn of the 21st century, the Chinese commitment to market opening, economic reform faded.

This mutually beneficial relationship continued well into the latter half of the 20th century as China and the United States developed a rich, vast set of economic cooperation. The United States thought it could handle a rising China and guide it towards a liberalization of its economy and then society. But after the turn of the 21st century, the Chinese commitment to market opening, economic reform faded and the country began to roll out a series of ambitious and aggressive industrial polices supporting Chinese firms.

Until the early 2000s, the United States believed that China was going to transform itself into an open, market-based economy, yet this has not turned out to be the case.

Until the early 2000s, the United States believed that China was going to transform itself into an open, market-based economy, yet this has not turned out to be the case. “The commitments China made when it joined the World Trade Organization have not been fulfilled, and China has not begun steps of changes, reforms, and opening,” said Naughton. “This has been a deep shock to not only U.S. interests, but to the way the United States perceived China and the economic opportunities that were in China.”

However, it is not only the United States that is wary of a threatening, rising China. Shirk, who had recently returned from a trip to Beijing, expressed how the leadership in China, the elite, and intellectuals are all worried about the perception of current U.S.-China relations. “In the last year or so, the backlash against Chinese policies has intensified in the United States and other advanced industrial countries,” she said. “Folks in Beijing are aware of this problem and are trying to figure out what to do about it.”

While the Chinese Communist Party deals with their own image and reputation issues, the United States must also figure out how to move forward to preserve U.S. interests and values in the face of a more challenging China. The panel highlighted the need to take a very firm, yet flexible approach and made the following recommendations.

The United States needs to recommit to cooperation with its allies and advocate for a revitalization of a rules-based, economic order.

While the panelists agreed that the Trump administration is correct in speaking publicly and frankly about Chinese policies and the unlevel playing field U.S. businesses face with China, they also pointed out that the administration has made some missteps. Alienating allies, implementing unilateral tariffs, subverting international institutions, and withdrawing from coalitions like the Trans-Pacific Partnership (TPP) are steps in the wrong direction.

Although it is time to take a firmer stand against China on the part of the United States, Shirk noted how pushback alone is not an actual strategy that will get Chinese decision makers to make the changes the United States seeks, such as open markets, less protectionism, and a decrease in military activity in the South China Sea.

A U.S. approach that strongly emphasizes pressure and deterrence, while acting multilaterally rather than unilaterally, would be a step in the right direction.

“We propose an alternative method called ‘smart competition,’” she said, referring to the panelists who worked on the Course Correction report. “Smart competition” is a mixture of competition and cooperation that does not foreclose the avenues for stability. The panelists argue that if the United States invests in American innovation and makes a good-faith effort to negotiate the issues of importance to the United States, it will we be able to continue to test the willingness of China’s leaders to modify their policies.

“Trump has gotten China’s attention,” said Schell. “Now what are we going to do with it?” The panelists argued that a U.S. approach that strongly emphasizes pressure and deterrence, while acting multilaterally rather than unilaterally, would be a step in the right direction.

Gemma Stewart is a Communications Project Fellow at the Pacific Council on International Policy.