U.S. Challenges in 2019: Domestic and International 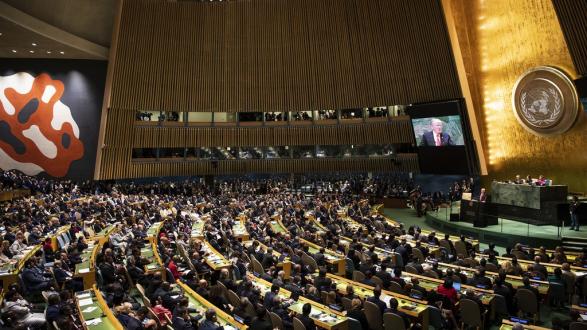 Supporting international institutions and keeping allies close are often seen as opportunities for the United States, but maintaining such relationships is losing priority and proving to be more difficult, experts told Pacific Council members in a teleconference on challenges the United States faces on the international stage in 2019.

As U.S. leadership may be taking a back seat on the world stage, Kimberly Marteau Emerson noted that democratic principles are at risk for “even the world’s most established democracies have shown themselves vulnerable to autocrats using demagoguery and manipulation.”

However, she also pointed out “there’s a growing global trend to confront these abuses, within the EU, UN, and [other] coalitions of states, often backed by civic groups and popular protests, that are starting to push back against anti-rights populace.” Emerson stated the United States has the opportunity to support such pushback against repressive regimes and be a leader in the light of democracy.

While Mietek Boduszynski agreed that the deepening of repression and the rolling back of democracy are great international issues facing the United States, he claimed “the underlying challenge with all foreign policy issues is this tension with Trump’s ‘America First’ instincts, which are to relieve the United States of entanglements, especially in the Middle East, and in some ways that’s not so different from Obama.”

"Even the world’s most established democracies have shown themselves vulnerable to autocrats using demagoguery and manipulation."

Nevertheless, he pointed out that the United States has leverage in ongoing conflicts in the MENA region, specifically Yemen and Libya. “There's a real hunger for U.S. leadership in Libya. [With the Saudis], we have more leverage than we think we do and perhaps congressional anger over Jamal Khashoggi's killing could be channeled in this direction. The United States could use its leverage to push a peace settlement in both cases,” said Boduszynski.

Ambassador Nina Hachigian pointed out how the foreign policy process in the White House and between departments that conduct foreign policy needs to be better preserved. Such relationships between government agencies should be “nurtured on a regular basis… and be on the same page [so the United States] can be prepared to respond [to international issues] in an effective manner.”

"The underlying challenge with all foreign policy issues is this tension with Trump’s ‘America First’ instincts, which are to relieve the United States of entanglements, especially in the Middle East."

In regards to international institutions and alliances, the ambassador said the United States needs to “reserve institutions and treaties that keep us safe. These are imperfect institutions, all of them, but they do benefit us. It matters when we are trying to get countries to do things that help us.”

According to Hachigian, the nations of the world “are more or less permanent fixtures and we have to deal with them on multiple issues over and over again. So if we are alienating them on one issue, we can’t expect them to be eager to help us necessarily on others.” Furthermore, Hachigian claimed that the United States can’t think short term in foreign policy, it needs to think long term.

When speaking about economic and security challenges, the ambassador said the United States needs to focus on developing a holistic economic and security strategy for Asia, including a coherent approach to China. “The name of the game in Asia is economics. But right now we don't have an overarching approach to Asia, so China can play the role of the unifier," said Hachigian.

"International institutions and alliances are imperfect institutions, all of them, but they do benefit us. It matters when we are trying to get countries to do things that help us."

She stated that one way to confront this challenge with China is to unite allies like Europe, Japan, Australia, and other trading partners in a coherent message with the United States. Furthermore, Hachigian said “that whole economic piece needs to be fitted within a broader strategy that includes military and diplomatic strategies, including human rights.”

Panelists agreed that human rights abuses around the globe should not be overlooked as a foreign policy challenge. Emerson said the United States must address China’s detention of Muslims in forced internment camps, which has alarmingly increased under President Xi Jinping’s rule.

“While China has vastly expanded its [repression] and surveillance on ordinary people, the United States should highlight China’s retention of 1 million Uighur Muslims for re-education. It seems like there is a little bit of a shift inside the administration to pay attention to that… and I would love to see the United States put a lot more focus on what’s going on with the Uighurs and that region of China in the coming year,” said Emerson.

The panel concluded that in order for the United States to succeed on the international stage in 2019, it needs to rekindle its relationships with longtime allies, respect international institutions, and be more active in holding repressive regimes accountable.

While the outset topic for the teleconference was to be on foreign policy challenges, by the end all three panelists agreed that internal challenges and reflections within the United States are to be considered as well. According to Hachigian, “the United States has everything it needs to succeed and prosper in this world, including with a rising China. The future is largely in our own hands. We have friendly neighbors, big oceans, an alliance structure, and the best military in the world.”

That said, the panel concluded that in order for the United States to succeed on the international stage in 2019, it needs to rekindle its relationships with longtime allies, respect international institutions, and be more active in holding repressive regimes accountable.

Gemma Stewart is the Spring 2019 Communications Junior Fellow at the Pacific Council on International Policy.