The Similarities and Differences Between Trump and Bolsonaro 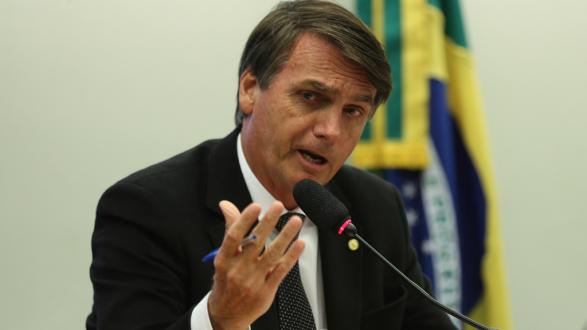 Barely two weeks after his inauguration, Brazil’s new President Jair Bolsonaro is being watched around the world as he makes his first moves. Bolsonaro’s Trump-like personality, far-right message, and identity as a disrupter have naturally encouraged comparisons between him and President Trump, and these similarities will likely translate into a promising future for U.S.-Brazil relations.

Speaking on a Pacific Council teleconference on January 8, Dr. Harold Trinkunas, deputy director of the Center for International Security and Cooperation at Stanford University’s Freeman Spogli Institute, stated, “Brazil’s diplomatic tradition has been one of autonomy on the international stage, somewhat mildly isolationist, not wanting to have permanent allies or friendships.”

Trinkunas referenced Bolsonaro’s about-face on this tradition in his willingness to “name names” of countries he considers rivals, like Cuba and Venezuela. On the other hand, “Brazil has not had such a pro-U.S. administration probably since the first period of the military dictatorship” in the 1960s.

Listen to the full conversation:

Bolsonaro has promised to address a wide range of issues including immigration from Venezuela, pension reform, and political corruption. Similar to President Trump, Bolsonaro has also suggested moving Brazil’s embassy in Israel to Jerusalem, withdrawing from the Paris Accord, and challenging China’s economic dominance in Brazil.

However, one of Bolsonaro’s key agenda items is developing stronger U.S.-Brazil relations “to attract investment and to address regional insecurity,” according to fellow speaker Roberta Braga, associate director of the Atlantic Council’s Adrienne Arsht Latin America Center. Braga believes the countries will work to forge a bilateral trade agreement, “particularly as Bolsonaro is able to address the ease of doing business in Brazil, which President Trump has criticized.” Beyond collaborating with the United States on technology, defense and agriculture, Braga expressed the vast economic potential for Brazil if cooperation with Mercosur-EU and Mercosur-Pacific Alliance increases.

Within the region, Venezuela’s migrant crisis will put increasing pressure on Bolsonaro to act. Although far more migrants have fled to Colombia, Peru, and Ecuador, over 98,000 Venezuelans have entered Brazil since the migrant crisis began. Braga further anticipates Bolsonaro and Trump collaborating on a stronger Venezuela strategy, including the possibility of economic sanctions.

“Certainly when it comes to Venezuela, we’ll see Bolsonaro taking a much harder narrative and we’ll see some, I believe, unification of Brazilian efforts with those of the United States, Colombia, and the Lima Group going forward,” she said.

However, there are some key differences between Trump and Bolsonaro’s situation domestically as Bolsonaro navigates his first weeks in office. Braga shared that Bolosonaro has not yet created a coalition, in contrast to previous presidents, but he has almost 30 years’ experience in the National Congress in Brazil. As he builds his coalition with right and center-right political parties, Bolsonaro will have to rely on compromise, as “the support of parties more to the center, like the Brazilian Social Democracy Party and the Social Democratic Party, are not guaranteed.”

On the other hand, Bolsonaro is coming into office with an approval rating around 70 percent. According to Trinkunas, “he also is taking over from a deeply unpopular president, so there’s a big difference from Trump taking over from the relatively popular President Obama. So Brazilians are willing to give President Bolsonaro a chance, I think, more so than people were willing to give Trump a chance.”

China is Brazil’s largest trading partner and Chinese investment has reached $20 billion in Brazil, so Bolsonaro must find a way to navigate a productive relationship with the United States and China.

Regarding his controversial campaign stances, Braga predicts he will seek to follow through on many of his promises, pointing to the actions he has already taken against the LGBT community. However, Bolsonaro has backed down on withdrawing from the Paris Accord, and Trinkunas underscored the necessity of coalition building and Brazil’s strong, independent judiciary as important checks on Bolsonaro’s power.

“He’s delivering early on some of the higher visibility, but easy-to-deliver promises, things that he can do by decree or just by changing things in the executive branch,” he said. “When he gets to some of the less popular reforms, like pension reform, we’ll see how well he does and how public support holds up for him.”

Another position Bolsonaro may have to walk back is his hard line against China’s economic influence. China is Brazil’s largest trading partner and Chinese investment has reached $20 billion in Brazil, so Bolsonaro must find a way to navigate a productive relationship with the United States and China. As Trinkunas pointed out, “Brazil, in a sense, benefited as agricultural products have increased and exports have increased to China, so that’ll add a dimension to this very complicated relationship” between Brazil, China, and the United States.

Although many disagree with Bolsonaro’s extreme social and environmental positions, Roberta Braga stated that his focus on crime, a slowing economy, high unemployment, and tackling political corruption are far more pressing voter concerns.

The basis for Bolsonaro’s election also presents a complicated story between Brazilian voters and national politics. Although many disagree with Bolsonaro’s extreme social and environmental positions, Braga stated that his focus on crime, a slowing economy, high unemployment, and tackling political corruption are far more pressing voter concerns.

Brazilians “were willing in this scenario, this year to overlook the social side of things” in order to see real change from previous workers’ party policies that were unsuccessful. As Trinkunas referenced, despite an extremely polarizing election, this attitude means most Brazilians want to give Bolsonaro the benefit of the doubt.

Despite Bolsonaro’s positions toward women, minorities, and environmental policy, Braga and Trinkunas expressed hope for the positive impact of coalition building and strong institutions on maintaining a level of balance going forward. Although comparisons between Bolsonaro and President Trump have saturated the media, Bolsonaro will inevitably have to forge his own path in order to navigate Brazil’s challenges at home and abroad.