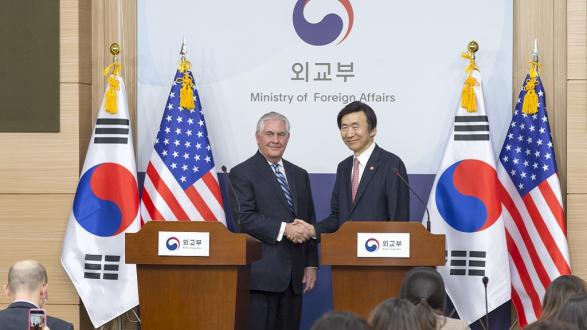 However, President Donald Trump’s decision to withdraw from the Trans-Pacific Partnership (TPP) and renegotiate the North American Free Trade Agreement (NAFTA) as part of his "America First" foreign policy, as well as disputes in the Northeast Asian region, pose challenges to the future of USKFTA and regional commerce between Northeast Asian economies.

What will U.S. withdrawal from the TPP mean for Northeast Asia? How can the region overcome its ongoing disputes and achieve cooperation? What has the USKFTA accomplished and where does it stand with the new administration? A panel of experts at the SeouLA Forum on March 31 will discuss.

Speakers in this session at the SeouLA Forum on March 31 will include Taeho Bark, professor at Seoul National University; Byung-il Choi, professor at Ewha Women’s University; Clara Gillispie, senior director of trade, economic, and energy affairs at the National Bureau of Asian Research; Yong Suk Lee, fellow at the Freeman Spogli Institute for International Studies; and Yunjong Wang, adjunct professor at Catholic University of Korea.

Stay tuned for results of the discussion.

Meanwhile, share your own opinion on social media: Can free trade help Northeast Asia overcome historic disputes and achieve regional cooperation? Join the conversation on March 31 by tweeting at us @PacCouncil and using #SeouLA.