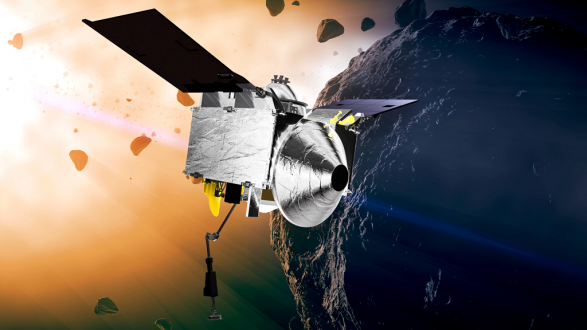 Space mining, also referred to as asteroid mining, remains a little-known industry that is still in its infancy, yet it holds the potential to far outstrip any other existing enterprise in terms of returns. According to NASA estimates, the industry could generate revenues of $700 quintillion.

Many companies representing various international interests such as Deep Space Industries, British-based Asteroid Mining Corporation (AMC), and U.S.-based Planetary Resources are gearing up to pursue space mining efforts in the possible search for platinum, nickel, gold, and ferrous metals, among other materials. Russia and the European Space Agency are pursuing a joint project to mine ice on the moon. Even the traditionally-earthbound United States Geological Survey (USGS) is getting in on the act.

As space exploration expands, a ready source of rocket fuel that would not require lifting into orbit would be quite valuable. Extraterrestrial water ice, broken down into its constituent elements of hydrogen and oxygen, could serve as such a fuel. Lunar ice therefore offers a possibility for the moon to serve as a space "gas station" of sorts.

With a multitude of resources up for grabs, who has a right to what? Are any laws in place to regulate exploitation? Or is it the “wild west” in space?

Future development of "space elevator" technology that would greatly decrease the cost of lifting materials to, and retrieving materials from, near-Earth orbit would additionally make the economics of space mining even more attractive. So, with a multitude of resources up for grabs, who has a right to what? Are any laws in place to regulate exploitation? Or is it the "wild west" in space?

In 2015, the United States passed the U.S. Commercial Space Launch Competitiveness Act. The law’s passage has caused some consternation in the international space exploration community, as it specifically contemplates U.S. citizens performing commercial recovery in what would be a clear appropriation of asteroid and space resources. The law in pertinent part states that such U.S. citizens:

Luxembourg was quick to follow suit, and it passed its own national space mining law styled the Law of 20 July 2017 on the Exploration and Use of Space Resources. This law seeks to parallel U.S. law. However, according to a spokesman for the Luxembourg Ministry of Economy, there is one significant expansion over U.S. law, in that "in the U.S. law, a majority of a company's stakeholders must be in the United States, while the Luxembourg law places no restrictions on stakeholder locations."

Critics state that the controlling international law is to be found in the United Nations treaties on space exploration. There are five major space treaties, but two specifically address exploitation of outer space resources.

Critics state that the controlling international law is to be found in the United Nations treaties on space exploration. There are five major space treaties, but two specifically address exploitation of outer space resources. The first is the "Outer Space Treaty" (OST). One hundred nations, including the major spacefaring nations-the United States, China, Japan, and the Russian Federation-have ratified it. A subsequent treaty-the Moon Agreement-provides in a relevant part in Article 11, Paragraph 2, that "[t]he moon is not subject to national appropriation by any claim of sovereignty, by means of use or occupation, or by any other means."

As of January 2018, relatively few states (18 total) had ratified the Moon Agreement and four additional states had signed but not ratified the agreement. However, of these 22 states, perhaps only Australia, France, and India have the capability to launch space vehicles. The Moon Agreement could have provided some guidance on exploitation of space resources, as it ostensibly prohibits claiming lunar natural resources for private ownership.

However, the United States and Luxembourg are not parties to the Moon Agreement, and in consequence the treaty has no "governing effect." Nonetheless, some legal scholars contend that the United States would be in breach of its international obligations if it were to "unilaterally pretend" that its citizens may exercise ownership over extracted space resources, given the absence of recognition of such rights under international law.

As the technologies advance, we are inexorably headed toward space mining becoming a reality.

Clearly it is the stated aim of both the United States and Luxembourg to promote the commercial exploitation of space resources. The two nations’ respective pieces of legislation attempt to provide a legal basis for private citizens to engage in such activities, which some critics would characterize as prohibited "appropriation" under international law.

The international community would be well-served by resolving the issue conclusively with an appropriate body of rules. As the technologies advance, we are inexorably headed toward space mining becoming a reality. Whether it will lead to increased resources, providing a net benefit for all people on earth, or serve to increase economic inequality by disproportionately favoring the spacefaring nations remains to be seen.

Robert Garcia is is a currently an LLM Candidate in Cornell Law School's Law, Entrepreneurship & Technology program at Cornell Tech in NYC.