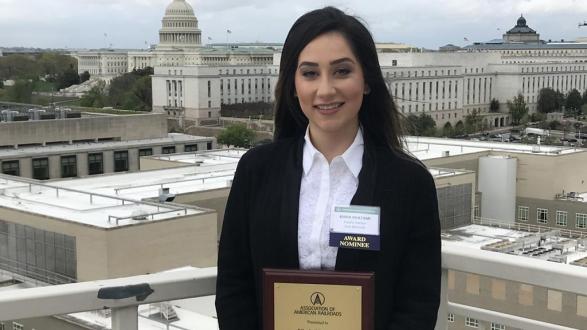 Kimia Khatami joined Pacific Harbor Line in November 2015 and was promoted to her current position in 2018. At age 27, she recently got elected as president of the Harbor Association of Industry & Commerce, which is the largest harbor association in Southern California.

She began her career in transportation with Union Pacific Railroad in Omaha, Nebraska, where she held various positions in the marketing and sales department. Her experience includes managing commercial projects, government relations, business development, and environmental regulatory compliance.

Khatami was nominated for the 2017 Association of American Railroads John H. Chafee Environmental Excellence Award for her efforts in ensuring PHL’s environmental compliance in the Ports of Los Angeles and Long Beach. In 2019, she was also recognized as a “Rising Star” by Progressive Railroading Magazine for her significant career achievements and contributions to the industry. She also serves on the executive committees of several non-profit organizations including the Harbor Association of Industry and Commerce (HAIC), California Short Line RR Association (CSLRA), and the Long Beach Chamber International Business Association.

Khatami recently sat down with us to discuss how her career in the rail industry relates to international affairs, what she likes about being a Pacific Council member, and the advice she gives students pursuing careers in the transportation industry.

Pacific Council: Why did you choose a career in transportation and commerce, and more specifically the rail industry?

Kimia Khatami: I did a study abroad program in Uganda when I was a sophomore in college and my primary research purpose was to identify opportunities for economic growth and development. The more time that I spent in East Africa, I realized that there are so many barriers to economic growth because of a lack of infrastructure and specifically transportation infrastructure, primarily because a lot of these developing countries have a lot of natural resources but unfortunately no way to capitalize on those industries. So they have the manpower and the physical resource but they have no way of being able to get their goods to market.

When I got back, it was something that was in the back of my mind. When you travel internationally, you start to compare how you grew up versus how other people grew up. What are the differences between my life here and how would it have possibly been in a different country? As I was doing those comparisons, I realized that the United States has had in such a short amount of time, about 250 years, such massive growth and an ability to become this economic powerhouse only because of its investment in transportation infrastructure.

So I thought, what do I want to do from a career standpoint that would contribute to that in some way? I decided to look at transportation companies, but I was more interested in goods movement. Because I’ve been in the rail industry for so long, I’m now interested in passenger movement as well, but my primary focus was always commodity movement and freight.

Essentially everything that you can see, touch, and buy in the store either in its raw form or its finished form was moved by railroad in America.  The United States has had in such a short amount of time such massive growth and an ability to become this economic powerhouse because of its investment in transportation infrastructure.

When I was getting ready to graduate from Brigham Young University and look for a job, I was looking for companies that were recruiting at my university who had some kind of a transportation emphasis. Guidance counselors on campus really helped me through the business school, because I was actually a political science major. A lot of people think that I must have studied transportation or supply chains to go into this career but I actually didn’t. I studied political science and that is exactly why I got into it this because of the political aspect and the economic aspect of transportation. So I started off with Union Pacific Railroad, which recruited me right out of college, and I just fell in love with it.

I thought it was such a great opportunity for growth. I was working at Union Pacific’s headquarters location in Omaha when this opportunity at Pacific Harbor Line opened up for me and they knew about my work at U.P., so it was just a very natural fit to come back to California and work in the port complex for this railroad.

How does your work in the rail industry relate to issues on the international level?

Essentially everything that you can see, touch, and buy in the store either in its raw form or its finished form was moved by railroad in America. It’s such a massive part of goods movement. Out of just the Ports of LA and Long Beach, about 30 to 35 percent of all of the containers that come in internationally or are exported out of the United States are moved by rail. At PHL, we’re the port’s railroad, so we’re handling 100 percent of the cargo that’s being brought in by rail and delivered into the terminals or loaded onto rail inside the terminals and moved outbound for imports.

As a company, we’re impacted so severely by any changes in the international trade atmosphere. So terrorism, the coronavirus, new trade agreements—whether that’s a good thing or bad thing, all that plays a role in how well we do each given year.

How has the commercial trade industry changed over the course of your career?

It has changed significantly. Five years ago when I started here at PHL, the shipping alliances were just starting to take form and then they’ve also gone through some other changes in the past about two years after that. I would say it's changed a lot. Shipping alliances this one aspect. Pricing changes have been also at play. But growth in capacity: we’re getting bigger ships, shipping capacity has increased on the ships. There’s not as much cargo. They can sit on it. Prices have dropped significantly. That changes the whole atmosphere in terms of the other modes of transportation.

Obviously, the railroads have had to react to that and so did the other ports because if it’s cheaper now to, for example, move the same size cargo, a 20 or 40 foot container, from China to the Port of Houston, and if it’s non-urgent cargo, then the Port of Houston is going to get the business over the Ports of LA and Long Beach, if they’re cheaper. Everyone in the chain has had to react to some of those modifications or corrections that the market has taken.

We thankfully have a history of being very resilient but at this very moment we’re all questioning how long the impacts are going to last and to what extent. Having an unstable domestic political atmosphere has been very detrimental to the ports.

One of the biggest shipping lines went bankrupt around Labor Day 2017. You have huge shipping lines that have also either purchased other terminals and other shipping lines or have gone out of business altogether and that has also changed the competitive landscape.

It could be a million different reasons why they go out of business, like mismanagement of resources, bigger ships coming in, not being able to cover all of their operating costs. Let’s say you have a really big ship that costs you $100 million to build but your capacity at each given way has only been 75 percent for the past two years, you’re not making any money off of it, so slowly that really catches up to you.

What drew you to membership with the Pacific Council, and what do you like about being a member?

I’m a political affairs nut. That’s what I studied in school. Everything to do with political affairs and not just from an economic standpoint but also foreign relations, that’s just a passion of mine. Someone that I worked with pretty closely at the LA Area Chamber of Commerce is actually who nominated me and she had been a member for about a year. I don’t know if she’s a member anymore but she highly recommended that I consider the Council and then I met Alex Jasiulek. He brought me into the fold and told me all about the membership opportunity and it was just something that I really like being involved in.

My parents are Iranian, and hearing Dr. Jerrold Green’s take on the whole Iran crisis about a month ago that he published to the Newsroom. Things like that, I listen to all of those. I really like the events; I wish they were a little closer to Long Beach because I hardly ever get all the way up to Beverly Hills, but I just love the network. I think the people that are part of it are part of it for the right reasons and I just think you guys do a really great job.

As a mentor with International Trade Education Programs (EXP), what do you tell students interested in pursuing careers in the transportation industry?

They don’t realize that every single one of these are multi-billion dollar businesses that need a president, a chief marketing officer, administrative staff. There are so many aspects to all of this and then the exposure that you get. If you care at all about what the world is going through, and for me that’s really the bottom line: how can I make an impact? In transportation you absolutely every day feel like you’re making an impact.

What are the most pressing challenges facing the San Pedro Bay Harbor today?

Five years ago, Obama was in power and we had a very positive working relationship with China. Every year Amazon was growing—not that they’re not growing right now. The “Amazon effect,” which is the need for two-day delivery times and quick responses to customer needs, has actually shifted the entire global supply chain pattern. It didn’t just stop with Amazon. Every other big retailer has had to react and make sure that they remain competitive. They say, “If Amazon is able to offer this product, we need to also be able to offer either the same or a better product.” So we’ve seen a lot of changes. Every year it seems like something pops up that you’re not expecting.

Get in touch with Kimia if you’re interested in learning more about her work by emailing us at engage@pacificcouncil.org.