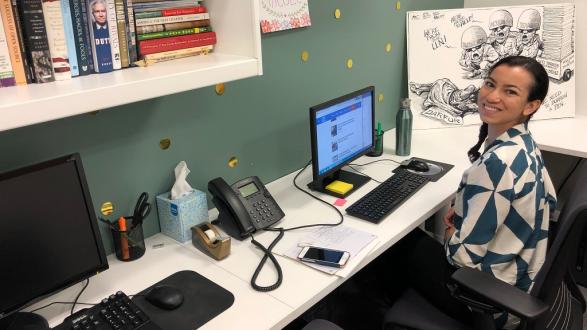 Nikki Burnett is the Summer 2019 Communications Junior Fellow. Currently, she is pursuing a Master’s degree in Public Diplomacy at the University of Southern California and serves as a Graduate Student Fellow at USC’s Center on Public Diplomacy.

Although she is a Midwesterner at heart, Nikki comes to Los Angeles by way of Washington, D.C., where she had been working at a strategic communications firm. At the firm, she helped provide communications counsel to clients facing legal, regulatory, and reputational risks.

Prior to joining the firm, Nikki graduated from American University with a B.A. in international studies and a minor in anthropology. As an undergraduate she gained media relations experience by working with the communications team at the Woodrow Wilson International Center for Scholars and spent a semester interning at the State Department in the Office of the Special Representative for Global Intergovernmental Affairs (S/SRGIA). At State, she supported the office’s subnational cooperation and engagement initiatives. Nikki also spent a semester studying in Istanbul, Turkey.

We sat down with Nikki to learn more about her passion for international affairs.

Fun fact: One of my favorite thrills was paragliding while visiting Pamukkale, Turkey—I would definitely do it again!

As someone who recently moved to Los Angeles after eight years in Washington, D.C., and several years in the Midwest, I am happy to be in a new environment and to be exposed to international affairs discussions taking place on the West Coast. LA is truly a global city, and the Pacific Council’s work is so important to understanding and advancing its influence internationally. Since my studies and career have focused on communications, I am interested to learn how the Council conveys its mission to a diverse audience—members, West Coast-based organizations, residents of Los Angeles, the American foreign affairs community, and those who live outside of the United States. I am very excited to be part of the team!

I was born abroad and my parents traveled with me quite a bit when I was a baby before moving back to the United States, but I was way too young to remember any of those experiences. So I always grew up with an interest in re-visiting the places I had been in addition to exploring new areas of the world. As I got older, I became more aware of the many challenges that cross borders and the need for sustained international cooperation. This eventually led me to move to D.C. to pursue my International Studies undergraduate degree at American University. From there, I realized that I was passionate about the intersection of global communications and international affairs. I took a public diplomacy class during my junior year that introduced me to the topic and what is needed to foster strong long-term relationships between global actors. It had been my goal to move out to Los Angeles and start a public diplomacy graduate program for several years, so I am very happy to finally be on the West Coast.

I was able to attend this year’s Global Los Angeles Summit, which was a great experience. As a public diplomacy student, I am very interested in subnational diplomacy and the power that cities, states, and regions can wield on the international stage. I especially enjoyed what panelists had to say during a session on soft power and Hollywood. LA’s film industry is unique, so I was intrigued by their commentary on how films are used to raise awareness of international issues and the impact of international politics on filmmaking.

Check out Nikki’s Newsroom articles about the Pacific Council’s recent discussions on tech regulations in India and the challenges hostage victims face abroad and at home.