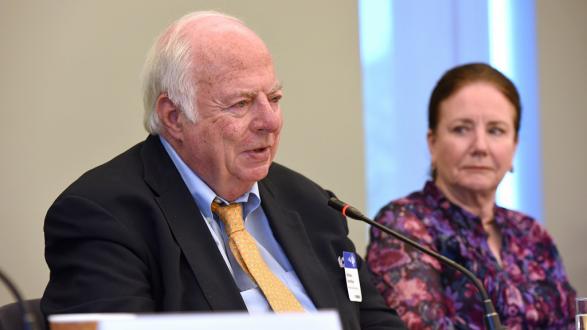 On May 21, 1995, Los Angeles Times reporter Steve Proffitt interviewed Dr. Abraham Lowenthal about his efforts to found the Pacific Council on International Policy in an article titled “Redefining U.S. Foreign Policy by Focusing on the Pacific Rim.” As we celebrate the Council's 25th anniversary in 2020, we're highlighting significant moments from the Council's history, and are reposting this article from the archives as part of our Founders Series. Read the full LA Times interview below.

LOS ANGELES—This weekend, a select group of movers and shakers from the Western United States are meeting in Marina Del Rey to discuss such international issues as trade policy, immigration, environmental controls and human rights. The gathering is the inaugural retreat of a new Los Angeles-based think tank, the Pacific Council on International Policy.

Unlike most Eastern policy-formulating organizations, the council will have as its focus the Pacific Rim—the western parts of North, Central and South America and the nations of Asia. Billing itself as nonpartisan, it will conduct study groups, issue reports and plans to publish a journal, all with an eye toward the increasing role international events—particularly those to the south and west—play in determining the quality of our lives here at home.

A West Coast-based policy organization with a focus on Asia and Latin America seems like a timely idea. Witness the current conflict over trade with Japan and the struggle to establish intellectual-property rights in countries like China. The decline in the dollar, concerns about North Korean nuclear proliferation and the nation’s confused relationship with Vietnam—all seem to cry out the need for new policies and new initiatives.

Lowenthal says that although it will be headquartered in Los Angeles, the Pacific Council will be a regional, national and international organization—and he claims that investing in it will pay off in expanded trade, more jobs and better international relations.

The driving force behind the Pacific Council is Abraham F. Lowenthal, director of USC’s Center for International Studies and a well-known authority on Latin America. Lowenthal, 54, has attracted a variety of top-echelon leaders from the public and private sectors and has raised some $3 million to fund the new institution. He says that although it will be headquartered in Los Angeles, the Pacific Council will be a regional, national and international organization—and he claims that investing in it will pay off in expanded trade, more jobs and better international relations.

Lowenthal was educated at Harvard; he has served as a fellow at the Brookings Institution and at the Council on Foreign Relations. He was an ardent supporter of the North American Free Trade Agreement. His wife, Jane S. Jaquette, shares his interest in international affairs and teaches at Occidental College. His two grown children live in New England.

At his home in Santa Monica, Lowenthal talked about the need to educate Western U.S. leaders on the myriad issues of international affairs and about the importance of impressing upon regular people the impact events in faraway countries can have in their daily lives.

Los Angeles Times: What impact do you hope this organization might have on the average walking-around Angeleno?

Abraham Lowenthal: The regular, walking-around person on the street, whether it’s in Los Angeles, or San Diego or Denver—everyone in the Western United States—lives in a world where things happening outside our borders are increasingly important to their daily lives. Important to whether they have a job, what the schools are like. What is the status of public health, and is the environment threatened? Drugs and the narcotics trade, and the value of the dollar they carry in their billfold. Every one of those things is affected by what goes on beyond our borders. To say, “Forget about all this international stuff, let’s concentrate on problems here at home,” doesn’t make sense anymore.

If our decision-makers, in the public and private sectors, understood international trends better, and developed smarter responses to things like German and Japanese economic policy, or changes in migration patterns, it would certainly have a real impact on the lives of people. And that’s at the essence.

But it’s not the sort of thing where we do a study on an issue and, three weeks later, people’s pockets are full, or their neighborhood is safer or their schools have improved. But everything interesting in life happens at the margin, step by step. And it’s in this way that our organization—If it can attract the right people and keep them focused—will have a real, positive impact on people’s lives.

Learn more about the Pacific Council’s 25th Anniversary and read more in the Founders Series.