Hong Kong on the Brink 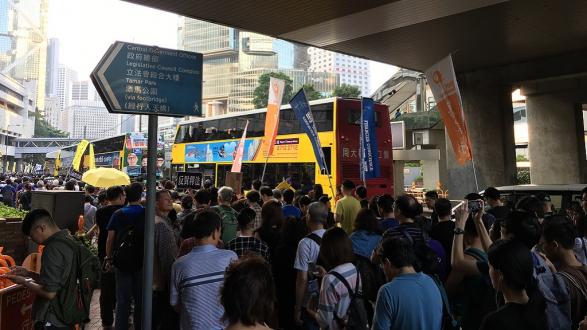 This is an edited excerpt from a piece by Jeffrey Wasserstrom that originally appeared in the Los Angeles Review of Books. A postscript has been added to include relevant updates.
____________

During a visit to Hong Kong in late 2016, I saw signs everywhere that symbolized the changing relationship between Beijing and Hong Kong, which was absorbed into the People’s Republic of China in 1997 with a promise that it could remain largely autonomous for the next half century. Then, just hours before I left on November 7, 2016, local news broadcasts portrayed the eventful and ultimately disturbing 24 hours of demonstrations that broke out in response to what has been dubbed "Oathgate."

Demonstrations that began on the afternoon of November 6 began peacefully, but later that night clashes between protesters and police officers turned violent, followed by many of us abroad via social media and television. A small number of protesters were arrested, and pepper spray dispersed the crowd. The next morning brought reports of Beijing officials issuing directives designed to rein in Hong Kong activists, and, finally, comments by Hong Kong’s Chief Executive C. Y. Leung, who endorsed Beijing’s warning and added that this might be the time to reconsider Article 23—a long-tabled, much-hated set of Patriot Act–like security measures.

All this was triggered by a typically routine oath-taking ceremony that went off script, referred to as "Oathgate." Several veteran activists who had participated in previous protest waves, including 2014’s Umbrella Movement, recently won seats on Hong Kong’s Legislative Council—"LegCo," for short. This governing body is symbolically important, even if real power over the city lies with a chief executive, who is always selected via what truly is, to invoke a word that has lately been misused in the American context, a "rigged" election. Only those approved by a pro-Beijing nominating committee are allowed on the ballot, so only candidates that the Communist Party find congenial have a shot at winning.

A series of standoffs have pitted defenders of Hong Kong’s partial autonomy against the mainland’s mighty Communist Party and its local surrogates.

Among those newly elected to serve on LegCo were two strong supporters of Hong Kong independence, a position that is anathema to Beijing: Sixtus "Baggio" Leung, a 30-year-old man, and Yau Wai-ching, a 25-year-old woman. While being sworn in, they refused to say what they were supposed to; instead, they cursed and used terms such as "Hong Kong nation," which they knew would infuriate Beijing.

The trigger for the November 6 march was word that Beijing’s National People’s Congress was going to rule on how to deal with these young independence activists, even though local courts were already in the process of deciding the issue. On the morning after the protests, Beijing ruled against the activists, making clear that their oaths were not valid, and that they would not have a second chance to take them; in other words they were not going to be allowed to take their elected offices.

This angered all those concerned over the mainland’s steadily tightening grip on the city. Even a significant segment of this population who originally thought the two young legislators had behaved in an unproductive, crude, and juvenile fashion were infuriated, since the autonomy of local courts is taken seriously.

C. Y. Leung’s talk of implementing Article 23 only ratcheted up the outrage.

Back in 2003, the original effort to put Article 23 measures into practice had sparked large demonstrations. These ended with a pivotal victory for the protesters. A series of similar standoffs have followed, most famously in 2014, pitting defenders of this small island’s partial autonomy against the mainland’s mighty Communist Party and its local surrogates. The match-up is, to put it mildly, unequal, which makes the small victories secured by the protesters especially surprising.

The Umbrella Movement was fueled by economic and social issues as well as purely electoral ones, and after police took the unusual step of using tear gas against protesters, it became largely a fight to defend the right to protest itself.

I came to Hong Kong in early November 2014 to get a sense of the Umbrella Movement. That struggle’s stated aim was to change the way the city’s chief executive is elected, so that voters would have a real choice between varied candidates, not a pseudo-choice between a set of potential puppets. Intimately entwined with something called "Occupy Central with Peace and Love"—a local variant of the globally distributed "Occupy" surges of the time—the Umbrella Movement was fueled by economic and social issues as well as purely electoral ones, and after police took the unusual step of using tear gas against protesters in late September, it became largely a fight to defend the right to protest itself.

Two years later, in 2016, the Umbrella Movement began to feel more like a mixture of failures and successes; after all, several people associated with it—including Nathan Law, one of the main student leaders—have been elected to LegCo as well.

I took a snapshot on the afternoon of November 6, 2016, after watching marchers carry signs that advocated autonomy and urged resistance to all injustice. The photo features demonstrators on parade in front of a passing bus. Covering the whole side of the bus is an ad for an alcoholic drink—a mainland-made baijiu called "Meng Zhi Lan," which comes in a blue bottle. The words emblazoned across the bus in Chinese characters refer to the "Chinese Dream" and "Dreams in Blue."

"Chinese Dream" (Zhongguo Meng) is Xi Jinping’s mantra, representing the drive to reassert the country’s global centrality. It is, to invoke an American parallel, the leader’s call to "Make China Great Again."

The ratcheting up of repressive measures has not stopped some Hong Kong students from continuing to push back against efforts to make their city as tightly controlled as those on the mainland.

I imagine how differently Xi Jinping might view the advertisement and the marchers. The bus provides evidence that his pet phrases are becoming part of the Hong Kong business landscape, complementing the ever-larger role of Beijing rhetoric and propaganda in the city’s media landscape. But the image also includes the crowd.

As powerful as Xi is, and as much weight as his Goliath-like government can throw around in the world these days, he must find this reminder of people’s willingness to take action even when the deck is stacked against them profoundly unsettling.

These are very dark days for the Davids in Hong Kong. Distracted with their own crises, other parts of the world are all but ignoring Beijing’s encroachment into the city. But for a Party that would prefer to focus on its dreams, determined marchers taking to the streets are the stuff not of Chinese dreams, but of jittery nightmares.

Since November 2016, a great deal has happened on both sides of the Pacific and both sides of the border separating Hong Kong from the Chinese mainland. New dramatic episodes have taken place in the ongoing David and Goliath struggle between Hong Kong activists on the one hand, and the forces within the city and China's capital eager to minimize the political differences between this special metropolis, on the other.

One example of this I witnessed during my current visit to Hong Kong involves the Goddess of Democracy statue located at the Chinese University of Hong Kong, a replica of the famous original that protesters erected in Tiananmen Square in 1989. Students have added a new skirt-banner to this enduring symbol of defiance. It is emblazoned with calls to work to support Hong Kong's "political prisoners," including Joshua Wong and Nathan Law. These two leaders of the Umbrella Movement were convicted of acts of civil disobedience and sentenced to community service, but then the local authorities pressured the courts to reconsider this punishment and impose a harsher one. Earlier this summer, Wong and Law began serving six and eight-month prison terms, respectively.

I referred to dark days for Hong Kong's "Davids" when writing about the response to "Oathgate" last November, and now things have grown darker still. As the latest adornment of the Goddess of Democracy statue shows, in addition to the posters and banners I have seen on the "Democracy Wall" bulletin board areas at local campuses, the ratcheting up of repressive measures has not stopped some Hong Kong students from continuing to push back against efforts to make their city as tightly controlled as those on the mainland.
____________

Jeffrey Wasserstrom is the Chancellor's Professor in the History School of Humanities at the University of California, Irvine. He will participate on the "Unease in China? Taiwan, Hong Kong, and Religious Unrest" panel at Members Weekend 2017.