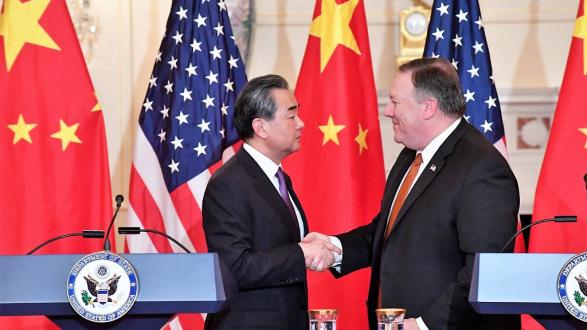 This week, the United States and China continue trade negotiations; Italy forms a government after nearly three months; Ebola is back in Democratic Republic of Congo; and more.

Colombia has spent decades fighting leftist paramilitary groups. Now, one of their former organizers, Gustavo Petro, is running for president and doing surprisingly well. In his youth as a part of the April 19 Movement, Petro was arrested, tortured, and thrown in jail, and sought a career in politics and government upon his release. Petro is in second place in the polls behind centrist Iván Duque ahead of the May 27 election. He is cheered for what he stands against—further military and paramilitary action against insurgent factions, military eradication of coca plants, U.S. aid in coca eradication—more than the reforms he stands for. As such, investors are not overly worried that his stance will garner too much support and change the foreign investment landscape of Colombia too drastically, and the Colombian peso has maintained its strength against the dollar.

Residents of Kabul, Afghanistan, are increasingly angry with their government as the Taliban and ISIL continue to carry out deadly bombings and terror attacks. Some feel it is "even worse than the civil war," as fear has gripped the city. Sustained attacks corroborate inspector general reports from the Pentagon, State Department, and USAID that there are "few signs of progress" in Afghanistan under President Trump’s direction. Still, the government of Afghanistan remains committed to U.S.-backed elections in October, and the U.S. Army believes "chaos and progress can coexist." This is highlighted by the fact that half of parliamentary ministers are under 45 years old, and half of rural community council members are under 45, with half of those members being women.

China and the United States have been locked in negotiations over trade and tariffs for the past several weeks. Some officials in the Trump administration are seemingly unsure of where the two countries stand or what the messaging is concerning these negotiations and policy going forward. The Trump administration is concerned with the trade deficit between China and the United States, which stands at about $375 billion annually, and are pushing for Beijing to close the trade gap by $200 billion. Tariffs have been threatened and concessions have been offered, but some, such as Senator Marco Rubio (R-FL) and the manufacturing sector, worry that the Trump administration has softened its stance, and that selling more goods won’t sufficiently close the gap. The reversal on Chinese telecommunications giant ZTE—a company which has repeatedly violated global sanctions on Iran and North Korea—is a move some have taken to mean the administration will treat national security policy as a part of trade negotiations. Further, the president has stated that the current framework is not satisfactory to getting a deal with China done.

Italian President Sergio Mattarella has appointed Giuseppe Conte to prime minister, allowing Italy to form a government more than two months after elections left no clear majority party. Conte was put forth on the backs of a shaky coalition between two rival populist parties, the 5-Star Movement and the far-right League. Both parties are Eurosceptic in nature, so showdowns between the European Union and the EU’s third-largest economy are to be expected. Some in the Eurozone are deeply concerned about the populist and anti-EU rhetoric coming from Rome, as Italy could sink the European project, or at least hold up pieces of major legislation, even as the European Union is at its highest popularity in 35 years.

Iranian leader Ayatollah Ali Khamenei stepped up attacks on the United States and President Trump for pulling out of the Iran nuclear deal. He asked Europe, and specifically France, Germany, and the United Kingdom, to continue supporting the deal and to stand up to the United States if the Trump administration moves to impose global sanctions on Iranian oil. Khamenei made it clear that he does not trust these European powers, saying they tend to follow Washington, D.C.’s lead. Secretary of State Mike Pompeo demanded that Iran withdraw all troops and support from Syria, as well as end their ballistic missile program, if they want to avoid further increased sanctions. The Syrian government has brushed off any possibility of Iranian forces withdrawing from Syria as the multi-faceted war continues.

Since the beginning of May in Indonesia, over 40 people have been killed in terror attacks by ISIL, ISIL-linked forces, and government counterterror operations. Recently, a well-liked family of six had radicalized and carried out suicide bombings against three churches in East Java, killing 12 churchgoers. This new spate of militant violence in Indonesia has included women and children, a departure from the roles of propagandists, teachers, and nurses they previously played in terror organizations. Indonesia is set to pass tough new anti-terror laws, which they have not had to do since attacks in 2002. The laws passed after those attacks were regarded as highly successful in countering militant violence in the world’s largest Muslim-majority nation. The bombings have sparked massive outrage from the rest of Indonesia, especially over the use of children as suicide bombers.

A recent outbreak of the Ebola virus in the Democratic Republic of Congo (DRC) has left over 20 dead. This recent outbreak has been centered in the city of Mbandaka, home to about 1 million people. The New York Times reports "global, national, and nonprofit organizations have coordinated their efforts well," though are clear this recent outbreak is still cause for concern. The National Security Council recently dissolved the biosecurity directorate, which came into existence during the last Ebola outbreak between 2014 and 2016. Additionally, the White House recently proposed rescinding $252 million of USAID funds previously dedicated to the fight against Ebola. The World Health Organization has so far not declared this outbreak a public health emergency, but has requested an additional $26 million in funding over the next three months for the Ebola response in the DRC.