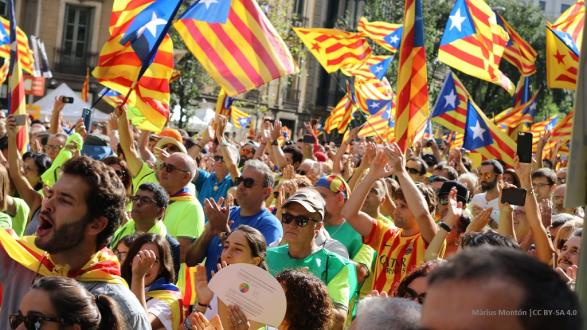 This week, Catalonia swears in a new secessionist regional leader; Myanmar and the UN reach a deal to repatriate Rohingya refugees from Bangladesh; President Trump wants to renegotiate NAFTA bilaterally; and more.

President Donald Trump and his administration have been working to renegotiate the North American Free Trade Agreement (NAFTA) with Canada and Mexico, but the president may decide to shift his administration’s tactics. According to National Economic Council Director Larry Kudlow, the president feels the discussions have not "been fruitful and a new one is needed," and is proposing each country negotiate with the other separately. Kudlow did not say President Trump wants to quit the accord, only to change his approach. This statement has received pushback from all three countries involved, including from Senator Orrin Hatch (R-Utah) and Pacific Council Director Michael Camuñez. The Canadians have noted that bilateral discussions related to NAFTA already take place, and that the agreements would need to be signed off by all three countries.

Shimla, one of India’s most popular summer retreats, has almost run out of water. Residents urged tourists and travelers to stay away from the area, as the 172,000 local residents have had to wait in line for hours to collect water from government water tanker trucks. If residents choose to bypass government water trucks, their only recourse is to buy bottled water or get water from the "tanker mafia"—private actors accused of stealing water from the public supply. The water shortage is a result of hotter summers and shorter winters, a growing population, water diverted for agricultural use, and polluted water supplies.

In the lead-up to the historic summit between President Trump and North Korean leader Kim Jong-un, North Korea continued its cyber-attacks on South Korea. Russia and China have assisted North Korea in targeting South Korean institutions with links to the government, including financial institutions, as Moscow and Beijing work to maintain their influence in Pyongyang and on the Korean Peninsula. South Korea is expecting even more attacks as the Trump-Kim summit nears. Pyongyang uses these cyber-operations as a part of its statecraft, working to gather intelligence, cripple foreign government agencies, and otherwise attack their adversaries.

The new leader of Catalonia, Quim Torra, has been sworn in and has vowed to continue the effort to secede from Spain. The swearing-in of a new regional government in Catalonia will pave the way for Madrid to suspend its direct rule over the autonomous region. During the swearing-in ceremony, the new Catalan premier took the opportunity to state his intention to "advance toward the construction of an independent state." Torra has demanded to meet with newly sworn-in Spanish Prime Minister Pedro Sanchez, who himself has called Torra "the Spanish Le Pen," referring to French far-right nationalist politician Marine Le Pen. Sanchez came into power on the back of a vote of no confidence in Spain’s former premier Mariano Rajoy and will need to rely on a coalition of parties, including Catalan secessionists, to get much done.

Iran has announced a plan to begin enriching uranium, but claims this does not violate the 2015 agreement Tehran entered into with Western powers. Vice President and head of the Atomic Energy Organization of Iran Ali Akbar Salehi maintained that Iran does not plan to build nuclear weapons and only wants to use the enriched uranium for energy and medical purposes. European governments are scrambling to salvage the deal, which has been severely weakened since the United States withdrew in May. The European Union has said the agreement has not been violated. Israel has called for a military coalition to go after Iran if the country enriches uranium to weapons-grade levels. Iran is expected to be a major topic of discussion between global powers at the upcoming G7 summit in Canada.

UN agencies and Myanmar have signed a framework agreement for the return of Rohingya refugees. The UN High Commission for Refugees and the UN Development Program inked the deal with the government of Myanmar on Wednesday. This pact vows to create conditions for the "voluntary, safe, dignified, and sustainable" return of the 700,000 refugees living across the border in Bangladesh. Myanmar’s security forces have been accused of widespread ethnic violence against the Rohingya. UN Resident and Humanitarian Coordinator in Myanmar Knut Ostby maintained that "people need to have an identity, they need to be able to exist as normal people in society, and there needs to be an absence of violence. People need to be able to return in peace." Rohingya have never been granted any level of citizenship or citizenship rights, which may impede their return home.

Ebola cases in Democratic Republic of Congo (DRC) are seemingly slowing down after aid groups have started administering vaccines. The new vaccine was introduced in DRC on May 28 and donated by American pharmaceutical company Merck, and is the first vaccine formally approved for use by the World Health Organization (WHO). WHO has a stockpile of several thousand doses stored in Geneva. The virus is not the most contagious in the world—it can only be transmitted through direct contact such as touching bodily fluids—but it may remain dormant in the body for up to 21 days before symptoms begin to show, and has killed about half of the people it has infected in this most recent outbreak. Since this most recent outbreak was first reported about two months ago, 27 people have died and 58 currently have the disease or are suspected of having the disease. Health officials are hopeful that this new outbreak will open the door to finding new medicines and treatments for the deadly disease.