In Geneva, Global Health Diplomacy and Governance in Action 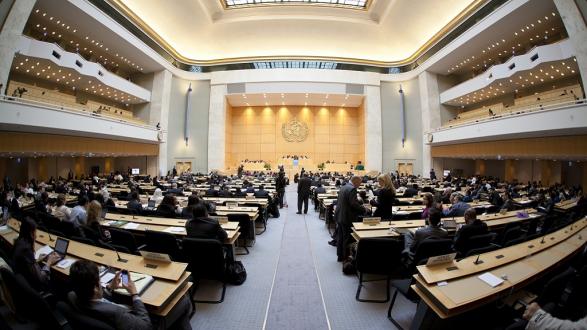 Next week Madison Webb, the Pacific Council's Foundations Officer, will travel to Geneva, Switzerland, to attend the World Health Organization’s (WHO) 69th annual World Health Assembly (WHA). The WHA is the supreme decision-making body of WHO and is attended by delegations from all WHO member states.

Pacific Council: How did you come to be involved in this event?

Madison Webb: I am currently working on a Master’s Degree in Public Health at USC, and my focus is on global health. Each year, the USC Institute for Global Health sends a student delegation to the WHA. It's an opportunity for us to apply what we have learned in our coursework to a real-world setting. We engage directly in the global policy process for health.

PC: What happens at this annual meeting?

As a student delegate, I will talk to member states as well as the various organizations, consortiums, and networks engaged in global health at the WHA. It's an insider look at the international diplomacy processes governing health and global health funding.

PC: What are the main health issues under discussion this year?

Madison Webb: The provisional agenda includes topics on WHO reform, communicable and non-communicable diseases, promoting health throughout the course of life, preparedness, and surveillance and response. I anticipate a rigorous debate on WHO reform coming off of the organization's response to Ebola last year: the main concern is how to ensure that doesn’t happen in the face of other infectious diseases, like Zika.

The post-development agenda – namely, the Sustainable Development Goals (SDGs) – is also important. What role should WHO take in reaching the targets laid out in the SDGs? How will the goals be financed? Those are issues that member states need to discuss.

PC: The Assembly is tasked with an enormous burden to substantively respond to pressing global health issues. Do you feel that WHO has been able to implement significant change through its annual meetings?

Madison Webb: WHO has been successful at asserting itself as the leading organization providing healthcare around the world. In the 1970s, WHO made a push to eradicate smallpox and is on a similar course to eradicate polio. The organization has passed some landmark resolutions in support of controlling diseases and promoting healthy lifestyles.

The problem is that the organization doesn’t always have the budget to back up its efforts. The majority of WHO’s budget is earmarked – meaning it will be used at the discretion of member states, and mostly the powerful, high-income member states. The small percentage that is not earmarked is usually not enough to cover the vast health needs of many low- and middle-income countries. So even though WHO puts forth significant calls for action at the assembly, their objectives often fall short on the funding side.

PC: What do you hope to learn from attending the 69th World Health Assembly?

Madison Webb: Health has always been a passion of mine – on the individual level as well as the global level. Many people around the world live in countries that do not prioritize healthcare systems and delivery, and there are so many barriers standing in the way of living a long and healthy life. Attending the assembly is a way for me to learn from the inside about how WHO works and how health priorities are set and funded. I want to walk away from the assembly with an understanding of the strengths and weaknesses of the current system so that in the future, I can more meaningfully contribute to the global health policy process.
____________________

Stay tuned to our Twitter page between May 23 and 28 for Madison’s live updates from Geneva. Read more about the 69th World Health Assembly and the USC Institute for Global Health.