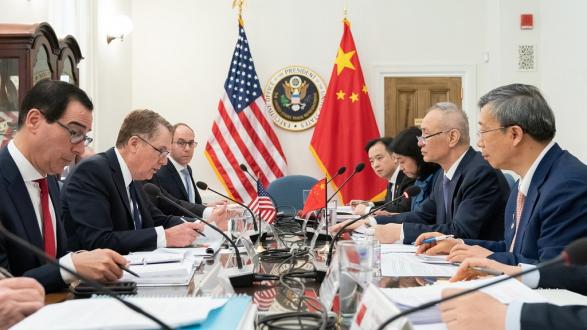 China is making an ambitious and aggressive play in the world’s emerging markets. From 2013 to 2018, China’s direct investment in developing countries through its One Belt One Road initiative surpassed $90 billion. Trade between China and “Belt and Road” countries surpassed $6 trillion. Through the Belt and Road Initiative, more than 244,000 jobs have been created for locals.

As a strong competitor of the United States, China’s economic diplomacy is always an important topic. In the PolicyWest 2019 conference held by the Pacific Council, experts discussed U.S. economic competitiveness abroad and compared it to China’s approach.

Joshua Kirschenbaum, a senior fellow at the German Marshall Fund’s Alliance for Securing Democracy, and Staci Warden, executive director of Global Markets Development Practice at the Milken Institute, analyzed China’s approaches to economic competitiveness, specifically how China conducts trade and investment in developing countries. The panelists discussed the differences in approach between China and the United States in terms of economic diplomacy.

"Economic competitiveness is a core element of national security and everyone just needs to internalize that."

China is confronted with controversies from the West and some Belt and Road countries, including accusations of neocolonialism and pushing countries into “debt crisis,” and that the Belt and Road initiative is a “geopolitical tool.” Faced with such doubts, China announced that the ultimate goal of the initiative is to “promote high-quality common development through better connectivity.”

The keyword in the statement is “common development.” Warden pointed out that the Chinese manufacturing and industrial capacity far outweighs its ability to sell those things to people at home. The Chinese economic model, which is very investment-heavy and not consumption-heavy, suggests that the initiative is mostly domestically driven. This analysis is in line with the goal of “common prosperity” that China cites, explaining that economics is the key motivator for the initiative.

In the discussion about what motivates China’s economic diplomacy, the need for strategic chokepoints was also mentioned. Djibouti is often cited as an example to illustrate this point. Though Djibouti is a small country with an entire GDP of only $1.8 billion (in 2017), it is situated at a critical chokepoint in the horn of Africa. China has funded a project called the International Free Trade Zone in Djibouti and opened up a military base there as well. Not coincidentally, the only permanent U.S. military base in Africa is also located in Djibouti.

Both speakers emphasized the importance of the U.S. government paying more attention to economic competitiveness.

Citing the example of Djibouti, Kirschenbaum made a point that national security and economic diplomacy shouldn’t be discussed separately.

“Economic competitiveness is a core element of national security and everyone just needs to internalize that. More and more people are getting that in Washington, but that’s been undervalued and underappreciated,” he said. “And that goes back to the resting on our laurels point.”

He added that there is an urgent need for a more coordinated and strategic vision about how the United States will compete effectively in markets abroad.

According to a study from the Kiel Institute for the World Economy, a Germany-based think tank, between 2000 and 2017 other countries’ debt owed to China soared to more than $5 trillion. Worries of the so-called “debt-trap diplomacy” were widespread. People who see the Belt and Road initiative through this perspective think that China is deliberately overloading weak countries with loans to ultimately seize their assets and influence their politics.

Kirschenbaum pointed out that there is a possibility that the goal of China’s approach is not to actually make money. Rather, it is to support the Chinese economic model to gain influence and ultimately to facilitate trade and deepen government relationships.

Hambantota, a Sri Lankan port which was handed to a state-owned Chinese company on a 99-year lease, is an often-cited example by people who believe in the “debt trap.” As China tries to calm jitters about the Belt and Road initiative, The Economist cited a scholar at Johns Hopkins University, stating that, “Of more than 3,000 China-financed projects that she and others have tracked, Hambantota is the only one that is used in support of the debt-trap theory. It is the exception, not the rule.”

The speakers’ consensus was that China’s approach in lending debt is not malevolent, while they thought that whether China expected to be paid back or not initially remained a mystery. China made loans to countries where many of them have a junk credit rating. In comparison, the U.S. investment model is commercial, with the consideration of each country’s credit rating, ability to repay, political and economic risks, etc.

Kirschenbaum pointed out that there is a possibility that the goal of China’s approach is not to actually make money. Rather, it is to support the Chinese economic model to gain influence and ultimately to facilitate trade and deepen government relationships. In this regard, the money that was not repaid was still well invested. According to the Centre for Global Development, China provided relief to its debtors overseas in more than 80 cases between 2000 and 2017. Reducing the amount of money that debtors need to repay is a more typical response by China.

The role the United States should play is to continue to serve as a beacon for supporting democracy, transparency, and civil rights.

“China is dedicating a lot more resources than the U.S. government on the ground,” Kirschenbaum said. “China outnumbers the United States 40-to-one in terms of commercial service officers on the ground. They’re hearing about deals and transactions and talking to governments.”

Both speakers emphasized the importance of the U.S. government paying more attention to economic competitiveness. They agreed that the role the United States should play is to continue to serve as a beacon for supporting democracy, transparency, and civil rights, where American values and comparative advantages are clear and in line with what the United States has always championed.

Yixin Zhou is a USC graduate student participating in a foreign affairs reporting class taught by Professor Phil Seib, a collaboration between the Pacific Council and the Annenberg School of Communication and Journalism.