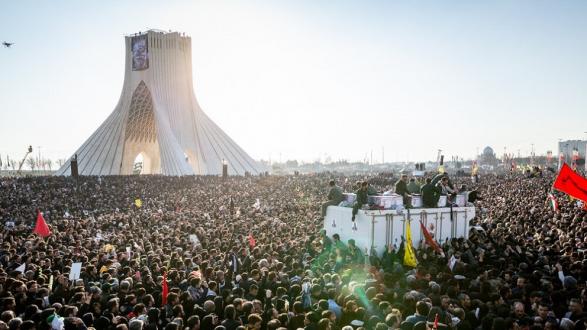 The United States relies too heavily on hard power. This is not surprising when the nation underappreciates noncoercive foreign affairs and diplomacy. So, as I read commentary on President Trump’s decision to assassinate Iranian General Qassem Soleimani, I feel the urge to take a step back and see if this signals a bigger problem, again. The same problem that should have been more pronounced when he pulled the United States out of JCPOA (the nuclear agreement with Iran) or the Paris Climate Agreement.

But wait; he was democratically elected. So, it is ultimately the public’s reluctance to contemplate noncoercive statecraft that sits at the heart of the problem of America’s shrinking global influence today. Thinking that national security is synonymous with national defense is problematic. In other words, it is a problem to think that a strong military is enough to ensure security. But can we be a nation that values soft power and diplomatic integrity more?

Perhaps the answer lies within the hands of local government officials with international purview. They can be the missing link and connect their local constituents to their global aspirations. By doing so, they can help elevate the importance of global affairs and diplomacy among the American people, one city at a time.

More federal money could be spent on non-military foreign affairs, such more effective investments in soft and smart power, with potentially higher return-on-investment rates in terms of national security.

As former Deputy Assistant Secretary of State David Duckenfield mentioned in a 2015 visit to USC, many Americans do not know what the State Department is meant to do and might even think that State oversees matters related to the country’s own 50 states. In 2013, only 10 percent of young Americans thought that “America should be more globally proactive.” Consistent with public attitude, in recent years, less than 1 percent of the federal budget is spent on foreign affairs, which means a 12 percent cut in foreign affairs spending compared to 2010.

Americans are nonetheless in favor of increasing defense spending, as evidenced by Congress’s approval to increase U.S. military spending for the fifth consecutive year. This suggests that the nation is in fact concerned about national security but associate that solely with defense. This results in potential missed opportunities for better enhancement of national security; more federal money could be spent on non-military foreign affairs, i.e. more effective investments in soft and smart power, with potentially higher return-on-investment rates in terms of national security.

Additionally, Americans are missing out on business development, economic, cultural, and educational opportunities that are available to them through the State Department as well as other services offered to U.S. citizens at home and abroad.

Back to the recent example. By killing Soleimani, the Trump administration handed Ayatollah Khamenei the perfect winning hand: Iraq voted to expel the U.S. military; Iranians are remarkably united and rallying behind their flag as if the recent protests did not even happen; animosity toward the United States has increased across the region among many, including various Shia groups who are likely to act more boldly in revenge.

What better place than Los Angeles to tackle this issue from a fresh perspective, facilitated by city diplomats?

With Trump’s latest threat to bomb Iranian cultural sites, even pro-monarchy Iranian expats are turning anti-Trump. Overall, the Iranian people, being the most pro-Western and least anti-Semitic in the Middle East, who could be a great ally for the American people, are growing more estranged. Chances of rapprochement between the two nations are becoming slimmer. The Middle East is on the brink of another war.

The winning hand seems to be held by the people who deem it okay to attack an embassy, brutally crack down on civilians, disregard diplomatically negotiated international deals, or threaten to bomb cultural sites. The losers here, unfortunately, are pro-diplomacy and pro-engagement people on both sides who are critical of the hardliners in power.

What better place than Los Angeles to tackle this issue from a fresh perspective, facilitated by city diplomats? LA Deputy Mayor for International Affairs and Pacific Council Director Nina Hachigian emphasized at the second LA City Diplomacy Summit, hosted by the USC Center on Public Diplomacy at the USC Annenberg School for Communication and Journalism, that the Mayor’s Office of International Affairs can play the bridging role for Americans to expand their understanding of diplomatic and international affairs.

If we, the people of the United States and Iran, more specifically LA and Tehran, realize that we have much more in common with each other than we do with our respective national governments, then we can come together and promote global engagement, people-to-people exchanges, and diplomacy.

Take the example of U.S. policy on Iran. Instead of the repetitive, highly partisan rhetoric that comes from D.C., can we tap into the diverse and creative nature of Angelenos and rethink some of the policy problems together? Perhaps this is one way to increase appreciation for the work that our diplomats do. Los Angeles is home to the largest Iranian community outside of Iran, earning it the moniker “Tehrangeles.”

It is also home to people of all stripes from across the United States. I’m certain that many of them would appreciate a more nuanced conversation about U.S.-Iran relations that is more outside-the-D.C.-box thinking. Yet this is just one example, among many, that can be used to connect with the local constituents and help elevate their appreciation for diplomatic affairs and U.S. soft power by involving them more in the affairs of the Mayor’s Office of International Affairs, from international exchange programs to advancing the sustainable development goals.

There need to be more nuanced but publicly accessible conversations about the effects of isolationist policies, such as sanctions against Iran and how they ultimately make its hardliners stronger and increase the domestic and global influence of the Islamic Revolutionary Guard Corps. This goes hand in hand with a better appreciation for what the JCPOA meant, and how walking away from it moves us closer to a war. The Mayor's Office can work with its academic and think tank partners to enhance its approach to public engagement.

In this globalized context, we can’t afford to rely only on our strong military and refuse to engage with the rest of the world in a more meaningful way.

One outcome would be having citizens who are informed enough to be able to assess Trump’s address to the nation on January 8, which happened after the Iranian response to the U.S. attack. The president emphasized the strength and size of the U.S. military, but never on other aspects of what makes the United States a great global power. Diplomacy was not once mentioned or praised. The JCPOA was again trashed and underappreciated.

I’m concerned that people will praise or criticize Trump based on their existing opinions of him in a highly polarized context, and not based on whether the president of the United States makes valid arguments about international affairs. The people of Iran took to the streets to dance and celebrate JCPOA, they did not respond by saying “Death to America” the day after the agreement was signed like the president claimed. Such a lie would not fly with a nation that is a tad bit more informed about global affairs and foreign publics.

If we, the people of the United States and Iran, more specifically LA and Tehran, realize that we have much more in common with each other than we do with our respective national governments, then we can come together and promote global engagement, people-to-people exchanges, and diplomacy. This is exactly what the hardliners on both sides, such as Khamenei, fear: global engagement. Perhaps the local government entities in charge of global engagement (such as mayoral international affairs offices) can drive this message home.

The next phase for this effort is to shape a citizenry that is more informed about and engaged with world affairs, in addition to domestic affairs, so that our democracy can thrive in the 21st century.

Lack of appreciation for soft power and noncoercive statecraft could be the result of various factors including but not limited to education, the nonmaterial nature of soft power, and the geographic distance of the United States from much of the world, which has until recent decades given it the privilege of declining to be engaged in certain aspects of global affairs. But such privilege does not exist anymore. In our hyper-connected world, politics, economies, and communities don’t end at country borders. In this globalized context, we can’t afford to rely only on our strong military and refuse to engage with the rest of the world in a more meaningful way.

In the United States, increased public appreciation for diplomacy paves the way for a democratically elected president who appreciates a more balanced and responsible statecraft that is not so heavily military-oriented. Cities, specifically their offices of international affairs, seem to be perfectly situated to tackle this issue because they are at the center of the network. They are part of the government system and yet are more closely connected to people and businesses.

The increasing number of globally shared challenges requires collaborative responses. Failing to acknowledge this will not only jeopardize our national security, but also our prosperity when we lose the chance to capitalize on opportunities that exist across borders for personal and professional development. Understanding this, cities are already stepping up to ensure the prosperity and security of their constituents through city diplomacy.

The next phase for this effort is to shape a citizenry that is more informed about and engaged with world affairs, in addition to domestic affairs, so that our democracy can thrive in the 21st century.