The Backlash Against Free Trade and What to Do About It 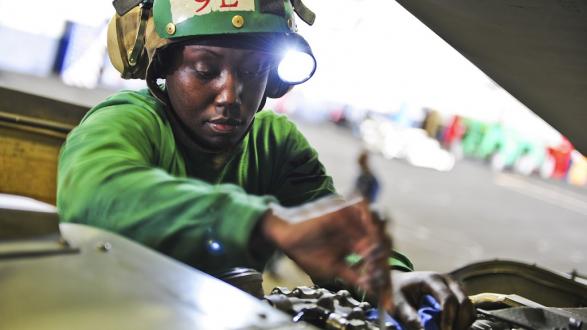 The following is an advance reading for the Members Weekend 2016 discussion Global Economic Forecast: Prospects for Growth, Innovation, and Development.
____________________

We know the value of free trade and open borders. Without the obstacles of tariffs and quotas imposed by rich countries, the gains to poor countries would be enormous, and hundreds of billions or even trillions of dollars would be added to the global economy. But in the United States and other rich countries, sustained job loss from trade is a key factor that has led to demands on political leaders to pursue protectionist policies.

These types of policies are born out of the populist discontent we are witnessing firsthand in the U.S. presidential election and the UK Brexit vote. In the United Kingdom, the Brexit vote illustrates what can happen when people feel their job opportunities are suffering due to liberalized trade policies. In the United States, there is a great deal of skepticism about trade deals such as the Trans Pacific Partnership and the Transatlantic Trade and Investment Partnership.

The Institute for Fiscal Studies in the United Kingdom warned that Brexit would hurt the UK economy. Others argued that poor countries would likely suffer additional, separate—perhaps greater—negative effects. But voters in rich countries seem to be sending a different message: if we want open migration and trade policies, we need to do more about domestic job losses, especially in traditional sectors such as manufacturing, shipbuilding, coal mining, and steel.

Economists generally accept that there will be winners and losers as a result of trade deals and from globalization more broadly. But they have made the fatal mistake of assuming that the losers will seek and most likely receive some form of compensation. The data clearly show that there has been limited uptake of trade-related adjustment assistance compared to the number of workers displaced (see the chart below). 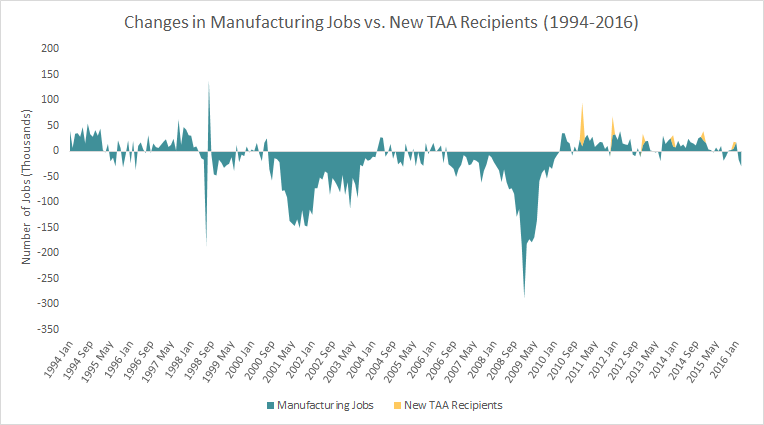 This chart shows all U.S. manufacturing job gains and losses from 1994 to 2016. Manufacturing is used as a proxy, as it has been hit hardest by the post-industrial shift that has relocated jobs overseas; losses in manufacturing employment are not inclusive of all trade-related losses, nor are all manufacturing losses necessarily due to trade. New Trade-Adjustment Assistance recipients are shown in yellow; data are not available prior to 2010 (Source: U.S. Bureau of Labor Statistics).

Negative impacts from trade policies raise other questions that have not received much attention from economists. Why do workers not move to other industries or to other parts of the country when they lose their jobs? Why have they not made use of trade-adjustment programs that promise job training, relocation allowances, credits for healthcare, and other benefits?  To what extent do declines in home values affect the ability of workers to move?

One of the most emotionally damaging aspects of wage stagnation and job loss among working class Americans has been the growing fear that, just as they have lower living standards than their own parents, their children are likely to do even worse.

Following the Brexit vote, Harvard economist (and board chair of the Center for Global Development) Larry Summers wrote in the Washington Post that rich countries should "avoid backsliding toward protection" while moving toward a more "responsible nationalism." The challenge is to implement policy solutions, such as investments in infrastructure, that prioritize domestic needs without exploiting working-class anger. These policies may serve another very important purpose—changing attitudes toward migration and trade.

If we want open migration and trade policies, we need to do more about domestic job losses.

Regionally targeted policies offer another path to assistance that may soften the blow of job losses. For example, the Obama administration launched the POWER+Plan in the FY 2016 budget, which awards grant funding to Appalachian coal communities experiencing economic hardship as national coal production wanes. Funding is funneled into programs that provide job training, reemployment services, subsidized employment, economic diversification efforts, and other supportive services to ease the employment transition.

If we believe that children are potentially more flexible than their parents at responding to new incentives, programs put in place to compensate the losers from free trade might also be made available to the children of those affected. This suggests not only job retraining policies for displaced workers but job training and even free college for their children.

One thing is clear: if we want to see poor countries get a better deal with respect to trade and migration, we need to do a lot more to tackle the problem of trade-related job losses in the United States and other rich countries.
___________________

Share your own opinion on free trade and open borders ahead of Members Weekend 2016: What effect has the loss of jobs, rising wealth inequality, and the rejection of free trade had on the global economic outlook? Tweet at us @PacCouncil: you can follow along and join the conversation on October 14-15 using #MembersWeekend.