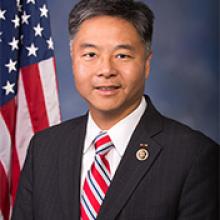 In 2014, Ted W. Lieu was elected to California’s 33rd Congressional District, succeeding retiring 40-year incumbent Henry Waxman. In the 114th Congress, Ted was elected president of the Democratic Freshman class by his colleagues. Today he serves on the House Judiciary Committee and the House Foreign Affairs Committee. He is also an Assistant Whip for the Democratic Caucus.

Ted is a former active duty officer in the US Air Force and currently serves as a Colonel in the Reserves.

Ted started his elected service as a Member of the Torrance City Council in 2002.  Prior to serving on the Council, Ted was a Torrance Environmental Quality Commissioner.

Ted and his family immigrated to the United States when he was three years old.  His parents went to flea markets and sold gifts and jewelry to make ends meet. Ted's family went from being poor and not speaking English well to opening up a gift store where Ted and his brother would help out in the family business.  After many years of perseverance his parents were eventually able to expand to six stores.

He joined the United States Air Force, where he served in the JAG corps.  After serving on active duty for four years, Ted wanted to continue to serve his country and joined the Reserves.

For Our National Security, It’s Time for Climate Action