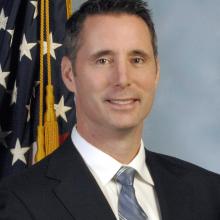 Paul D. Delacourt has served as the Assistant Director in Charge of the FBI’s Los Angeles field office since December 2017, leading an executive team with oversight of three operational divisions, intelligence, and mission services, and including nearly 1500 employees across the seven counties of the Central District of California.

Mr. Delacourt previously served three years as the special agent in charge of the FBI’s Honolulu field office. Prior to that, he served in the Inspection Division at FBI Headquarters (FBIHQ) in Washington, D.C., where he led reviews of field offices, national programs, shooting incidents, and special projects.

Mr. Delacourt began his career as a special agent with the FBI in 1995. He was first assigned to the Chicago Division, where he worked gang and drug investigations.  Following 9/11, he transferred to the Counterterrorism program, working in Chicago, Washington, DC, and Atlanta, GA.  Mr. Delacourt had temporary assignments to the Guantanamo Bay Task Force at FBIHQ, deployments to Afghanistan, Qatar, and Iraq, and served as the program manager for the Regime Crimes Liaison Office (RCLO), a presidentially-mandated Department of Justice Initiative created to investigate war crimes, genocide, and crimes against humanity committed by Saddam Hussein and others of the former Iraqi regime.

From 2009 to 2011, he served as the FBI liaison officer to a counter-narcotics task force at U.S. Pacific Command at Camp Smith, Hawaii.  In 2012, he was promoted to assistant special agent in charge of the Honolulu Division.

Mr. Delacourt earned a Bachelor of Arts from the University of Michigan and a Juris Doctor from Wayne State University Law School.