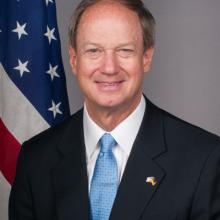 Rejoining Capital group in 2017 as Vice Chair of Capital Group International, Emerson previously served as President of Private Client Services of the Capital Group (1997-2013), and served on President Clinton’s senior White House staff (1993-97) as Deputy Director of Presidential Personnel and then Deputy Director of Intergovernmental Affairs (as the President's liaison to the nations' governors). He led the Administration’s efforts to obtain congressional approval of the GATT Uruguay Round in 1994. In 2010, President Obama appointed him to serve on his Advisory Committee for Trade Policy and Negotiations.

Before his White House service, Emerson was Los Angeles Chief Deputy City Attorney (1987-1993) and a partner at Manatt, Phelps & Phillips. He has served in many LA civic and non-profit boards, including as Chair of the LA Music Center (2003-11).

Originally from the suburbs of New York City, Emerson earned his B.A. in Government and Philosophy from Hamilton College and his J.D. from the University of Chicago. He moved to Los Angeles in 1978 and is married to PCIP Member Kimberly Marteau Emerson, who served in a senior role at USIA in the Clinton Administration and sits on the Human Rights Watch international board.

Commentary by John B. Emerson