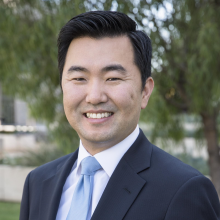 As Senior Deputy to Los Angeles County Supervisor Yvonne Burke, he helped oversee the County budget and worked as a Special Investigator for the Auditor-Controller, rooting out waste and fraudulent expenditures. Ryu then returned to the nonprofit world and served as Director of Development and Public Affairs at the Kedren Acute Psychiatric Hospital and Community Health Center.

On July 1st, 2015, Ryu became the first Korean American to serve on the Los Angeles City Council and only the second Asian American elected to the City Council. Upon entering office, Ryu introduced and passed legislation mandating document retention, put in place a first-ever Discretionary Funds Task Force, a citizen-run panel which oversees discretionary spending in his district, and has fought for sweeping reform to the City's campaign finance laws.

Councilmember Ryu has been responsible for legislation including a Party House Ordinance, new rules to limit mansionization, new ways to empower small dollar donors, and much more. With 42 City parks in Council District Four, Ryu remains focused on improving our park land and recreation spaces. Councilmember Ryu has also been a leader in building homeless housing solutions and has fought for grave disability reform. Additionally, working in partnership with LAUSD and Los Angeles County, Ryu is committed to developing a universal program that would provide every young person in Los Angeles a dedicated college savings account. Above all, Councilmember Ryu puts transparency and engagement with the community first. Councilmember Ryu is committed to putting the everyday Angeleno first, and working with neighborhoods to empower their voice in City Hall.