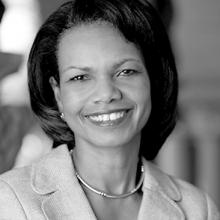 Condoleezza Rice is currently the Denning Professor in Global Business and the Economy at the Stanford Graduate School of Business; the Thomas and Barbara Stephenson Senior Fellow on Public Policy at the Hoover Institution; and a professor of political science at Stanford University.  She is also a founding partner of RiceHadleyGates, LLC.

From January 2005 to 2009, Rice served as the sixty-sixth secretary of state of the United States, the second woman and first African American woman to hold the post. Rice also served as President George W. Bush’s assistant to the president for national security affairs (national security adviser) from January 2001 to 2005, the first woman to hold the position.

From 1989 through March 1991, Rice served on President George H.W. Bush’s National Security Council staff, serving as director; senior director of Soviet and East European Affairs.  In 1986, while an international affairs fellow of the Council on Foreign Relations, Rice also served as special assistant to the director of the Joint Chiefs of Staff.

She has authored and coauthored numerous books, including two best sellers, No Higher Honor: A Memoir of My Years in Washington (2011) and Extraordinary, Ordinary People: A Memoir of Family (2010). She also wrote Germany Unified and Europe Transformed: A Study in Statecraft (1995) with Philip Zelikow; The Gorbachev Era (1986) with Alexander Dallin; and Uncertain Allegiance: The Soviet Union and the Czechoslovak Army (1984).

Can a Confident America Rise Again?
They Will Look to America