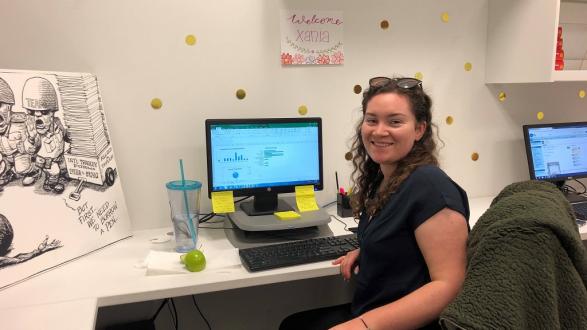 Xania Bytof is the Summer 2019 Membership Junior Fellow. She recently graduated from UCLA with a BA in International Development Studies and a minor in Global Health. Prior to her Junior Fellowship with the Pacific Council, Xania interned with the development operations department at Children’s Bureau of Southern California. In 2018, Xania studied in Santiago, Chile for a semester where she was a full-time student at the Pontificia Universidad Católica de Chile and an intern with the local nonprofit organization Comunidad Organizaciones Solidarias.

Xania’s interest in the Spanish language and Latin America started in her childhood neighborhood, where the majority of her friends and neighbors were Spanish-speaking. Throughout her college career, Xania has been able to explore this interest through her involvement with FISH at UCLA, an entirely student-run nonprofit organization that provides sustainable health and educational services to the community of Maclovio Rojas, Mexico. With FISH, Xania served as a member of the Training team and was responsible for designing and presenting trainings on all organization services including cultural competence, blood pressure screening and Spanish language learning.

In the future, Xania hopes to pursue a career in the nonprofit field in Latin America. More specifically, her goal is to improve the ethics and effectiveness of international development organizations by helping to implement resilient practices and facilitate direct participation by the local community.

We sat down with Xania to learn more about her passion for international affairs.

Go-to source for interesting takes on what’s going on in the world: Honestly… Twitter. There’s a really good mix of formal news sources, plus a wide range of perspectives that you wouldn’t normally get from mainstream media.

Fun fact: Maybe it’s due to my NorCal bias, but I actually was never interested in attending UCLA. I was planning on going to McGill University until last minute, when I found out about UCLA’s International Development major and decided to switch.

I grew up here on the West Coast, and I want to see citizens more informed about international and foreign policy. I often feel that I lack knowledge about most of the issues facing us today, and I struggle to find opportunities to educate myself. Washington, D.C., is often thought of as the center of international affairs but that doesn’t mean everyone else needs to stay in the dark, so I was excited to see that the Pacific Council is engaging people from the West Coast in these kinds of conversations. I hope to improve my own understanding about current issues, especially those in regions outside of Latin America that I am less familiar with. Another aspect of the organization that drew me to the Pacific Council is their emphasis on inclusion—I think it’s important to engage people from all backgrounds in international policy, not just the policymakers themselves.

I’ve always been drawn to international studies, but until recently I shied away from the political aspect. I knew I wanted to study something related to international relations but IR did not seem like the right fit. I chose to go to UCLA because I thought their International Development Studies department would be a closer match to my interests. Through my coursework, I’ve realized how naïve it was to think I could study international development through an apolitical lens. After learning more about the United States’ historically problematic role in development, I’ve become a lot more interested in engaging in international affairs and maximizing positive, culturally sensitive relations between the United States and the rest of the world.

Soon after I started with the Pacific Council, I was lucky enough to go on an office-wide walking tour of Downtown Los Angeles. Despite living here for four years now, I don’t know too much about LA’s history so I found the tour both informative and super interesting. I have to admit, I was taking notes on things to do and places to come back and visit on my own time! Plus, it was a nice opportunity to get to know people in the office a little bit better.