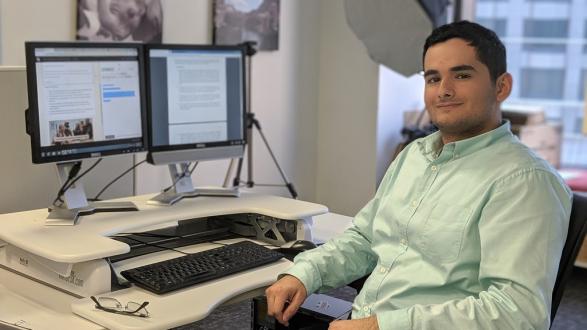 Jure Erlic is the Summer 2019 Junior Fellow for the project to Strategically Protect Soft Networks, an effort by Pacific Council member and retired U.S. Army Colonel Steve Miska to create a public-private enterprise that engages the U.S. policy community and infuses creativity into the development of policy measures that effectively protect allies of the U.S. military and diplomatic communities in conflict zones.

Jure Erlic was born and raised in North Hollywood. He studied at Carnegie Mellon University in Pittsburgh, Pennsylvania, where he pursued two majors: International Relations and Politics, and Social and Political History. As a member of the Institute for Politics and Strategy at Carnegie Mellon University, he had the privilege to spend a semester in Washington, D.C., during his junior year.

While in D.C., he interned with the Peruvian Embassy’s Department of International Cooperation and Relations with the States of the Union. During that internship, he aided the embassy in its mission by assisting the department in daily functions such as writing briefs on possible opportunities of academic cooperation, attended meetings, and edited a few speeches for the ambassador.

At Carnegie Mellon, he was involved in the Institute for Strategy and Politics Research Lab working on Kiron Skinner’s project “Organizing for War.” During that time, he assisted the lab by working in a team to create news and policy briefs for Professor Skinner, and was in charge of summarizing National Security Strategy reports from the Clinton to Obama era presidencies.

Jure was also a Latin American Specialist for the Resistance Organization Leadership Database which catalogued the biography and facts of resistance leaders around the world from the 1950s to the present. After this summer internship, he will return to Carnegie Mellon in the fall to pursue his master’s degree in International Relations and Politics.

We sat down with Jure to learn more about his passion for international affairs.

Go-to source for interesting takes on what’s going on in the world: In general, anything I can get my hands on. As soon as I hear about a breaking story I search multiple media sources such CNN, Fox, MSNBC, El Commercio (Peruvian newspaper), even RT News, etc., to try and get as much of a balanced picture as possible.

Fun fact: I am the first member of my immediate family to get a college education and will be the first to also (hopefully) get a master’s degree in international relations and politics.

Originally, I am from Los Angeles and spent most of my life here. It was hard for me to believe that such a diverse and large city had lacked any organizations dedicated to addressing international issues. I only happened on the Council by complete accident during an internship search for the summer in my junior year. After reading further information about the Council and some of its publications, especially on the issue of Chinese expansion into Africa and the U.S. relationship with Mexico, I was drawn to the Council’s message and mission. Although I did not apply to the Council for the summer of my junior year, as I had missed the application deadline, I made it a goal of mine to apply to the Council for the summer period after my senior year.

The earliest time I noticed that I was passionate about international affairs was my junior year in high school when the Arab Spring and beginning phases of the Syrian civil war started to take shape. I started to read a lot about current events to be informed for my AP European history course, as we would have a current events talk for the first 10 minutes before class started. After I graduated from high school, I was enrolled at Carnegie Mellon University where my passion for international affairs grew even further. Although CMU is often stereotyped to be a drama, engineering, or computer science school, I was privileged to have entered the university when it was starting to refine its international relations and politics degree programs. The courses and faculty that they had brought in, many of them RAND researchers from the Pittsburgh office, played a crucial role in nurturing and guiding my interests in areas of policy and national security.

Working with the project to Strategically Protect Soft Networks has exposed me to a topic that I may have heard about, usually as a footnote, in my studies at CMU but a topic that I never actually had the opportunity to pursue an in-depth perspective on. The most interesting thing that I have done during this period is my research on possible individuals and organizations that may be interested in the recent white paper that SPSN created. When people think of a white paper, coming from a purely academic background, they are focused on looking at something that already has achieved notoriety and multiple citations due to its publisher. But no one thinks about the process it took for it to get widely cited. Aiding this paper, on such a crucial issue, by trying to get it seen by a wide variety of people, has been an enlightening experience for me.

The project to Strategically Protect Soft Networks is an effort by Pacific Council member and retired U.S. Army Colonel Steve Miska to create a public-private enterprise that engages the U.S. policy community and infuses creativity into the development of policy measures that effectively protect soft networks. Learn more here.