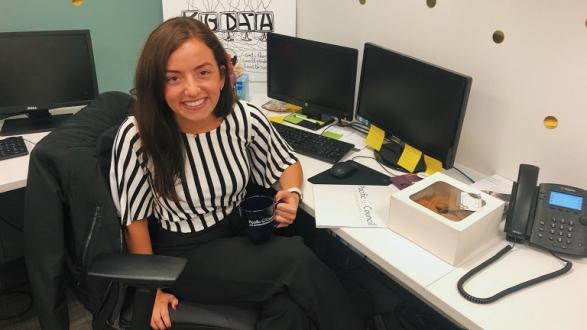 Lucy Santora is the Spring 2020 Programs and Special Initiatives Junior Fellow. A senior at the University of Southern California, she is majoring in International Relations with a minor in Spanish and is in the progressive degree program for the Master’s of Public Diplomacy.

Santora’s regional focus is Latin America, she has spent time in Colombia interviewing former members of the FARC and ELN, and this past summer she traveled to Cuba to dissect the cultural exchanges between the island nation and American citizens. As a Dallas native, she is thrilled to be so close to beaches and mountains, but misses Texas barbeque. When she’s not engrossed in research she can be found training for another half marathon or in search of the best pizza in LA.

We sat down with Lucy to learn more about her passion for international affairs.

Go-to source for interesting takes on what’s going on in the world: The Guardian, The New York Times, “The Daily Show with Trevor Noah”

Fun fact: In summer 2018, I studied at the University of the Andes in Bogotá, Colombia, and was able to interview former members of the FARC and ELN. I was also there during the World Cup and the Colombian presidential election!

The Pacific Council has made Los Angeles a hub for diplomacy and cultural exchange by seizing the influence of diaspora populations and building bridges between academia, government, private sector, and citizens. I wanted to be part of an organization that understood the value of non-conventional diplomacy. In a globalized world, the answers to our issues no longer lie solely in the hands of career diplomats and politicians; every part of society has a voice. The Pacific Council strives to let those voices be heard in a forum that develops productive solutions and mutual understanding.

When I was in fourth grade, my mom made me watch the inauguration of Barack Obama with her. It was 2008, I was 10 years old. I didn’t fully understand why this was such a big deal—I had paid attention in history class and I had general knowledge of racism in America. But did I want to spend my day watching some guy in a faraway office repeat a bunch of words? Absolutely not.

I wanted to read the latest Percy Jackson book. What struck me wasn’t that my mom found this event to be important (she also told me brushing my teeth twice a day was important), nor that it was the first time I consciously witnessed a president taking office. It was that people all over the world were celebrating his inauguration. The news showed people on every continent watching large projectors and dancing in the streets. I was so confused. Why do people on the other side of the world care about who our president is? And in that moment, I decided I wanted to find out.

My morning routine changed. Instead of balancing a book in one hand and gripping peanut butter toast in the other, I asked questions about the world between sticky mouthfuls washed down with chocolate milk. My parents were excited, but quickly exasperated that their child was rapid-firing so many questions so early in the morning. My father’s solution was to read newspaper articles to me and put extra peanut butter on my toast to slow down my ability to ask questions.

Now the mind of a child is creative, naïve, and wildly unpredictable. Mine was no different. Eventually, I learned that the world is just the same—filled with innovation, at times strikingly innocent, but ultimately uncertain. Maybe that’s why foreign affairs struck a chord in me at that age. Today, I love it for similar reasons but I see the world through a variety of realist lenses, rather than the rose-colored specs of childhood.

What recent international policy trend(s) do you think is/are important to address and why?

Democratic backsliding is a trend that is particularly perplexing in the 21st century. There is a large quantity of literature on the three waves of democracy and Francis Fukuyama’s infamous “End of History” thesis—but why in this moment of history, where the average person has more influence than ever before, do we see a turn towards authoritarianism? Many countries in Latin America are struggling for representative government, Eastern Europe is still trying to pry itself completely from Russia’s claws, and China has created a new form of imperialism with its FDI in Africa and its One Belt One Road Initiative.

Even in the United States, an argument has transpired over the powers of the president regarding Article 2 and impeachable offenses. The average citizen should be a formidable force in the social media age, but fake news and propaganda seem to be overriding the sanctity of public opinion.

The combination of democratic backsliding and fake news across the world must be addressed. This is not to say that the United States should interfere with another nation’s sovereignty; history shows us how such efforts to prop up regimes in Latin America and take down others have created more issues than they fixed in terms of power vacuums and fractured civil society.

However, all nations must be more vigilant in recognizing bias in their media and the rise of any forms of radicalism that threaten representative government. When nations fail to do this, we see civil war, an erosion of democratic institutions, corruption, and ultimately people fleeing to find safety.

Migration is a central tenet of human history. Movement is the natural state. However, as democratic backsliding and fake news have stirred conflict, migration has been exacerbated to unforeseen levels. Some of this is seen in students from all over the world coming to the United States for higher education opportunities or companies moving their headquarters to more stable nations.

Unfortunately, these factors are also responsible for the global migrant crisis that has been part of the world stage since 2015. From Syrian refugees flooding Europe to asylum seekers clamoring at the United States’ southern border, great nations have been faced with the question: what do we do with our fellow man knocking on our door?

The migrant crisis has shown us the ugly underbelly of the nations who champion humanitarianism and brought a rise to xenophobic policies. Five years later, the crisis rages on, spiking in the media every couple of weeks before fading back into the noise.

Thus, I ask myself and anyone willing to listen: what do we do in a virtually borderless world where the truth has become relative and civil society is swimming against a wave of authoritarianism?